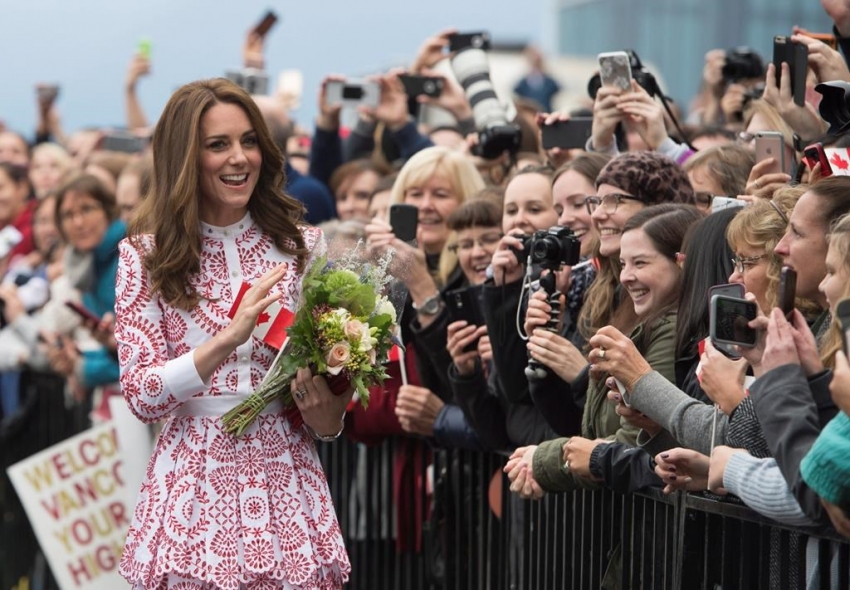 Kate Middleton receives flowers and greets onlookers on day two of the royal visit to B.C. and Yukon. Photo by The Canadian Press.

Prince William and his wife Kate will be surrounded by British Columbia's natural beauty and experience indigenous culture on Monday with a trip to pristine rainforest in the Central Coast region.

Visiting the renowned Great Bear Rainforest, among the largest intact coastal temperate rainforest in the world and home to the white kermode or spirit bear, the royal couple will dedicate the territory as part of the Queen's Commonwealth Canopy initiative.

The initiative was launched in 2015 to create a network of forest conservation programs involving all 53 countries in the Commonwealth.

As part of the network, regions can share ideas and innovations about forest conservation and receive global attention for their efforts.

Early this year, the province and the Coast First Nations including the Heiltsuk announced they would increase protection of the area, conserving 85 per cent of the forested areas from industrial logging.

Ahead of the visit, Heiltsuk First Nation Chief Marilyn Slett said in a statement: "We are greatly honoured to be in the world spotlight with this recognition of our work to protect our lands, waters and resources."

Along with seeing the areas natural beauty, William and Kate will take part in cultural ceremonies at the Wawiskas Community Hall in Bella Bella.

They will meet with Head Hereditary Chief Woyala who will be bearing a Royal Staff given to his great-grandfather from Queen Victoria.

The trip to the pristine coastal region comes after a day spent in Vancouver, including the city's gritty Downtown Eastside.

The Duke and Duchess of Cambridge toured the pregnancy outreach program Sheway, learning how its services help mothers overcome challenges, such as drug and alcohol addictions.

Sheway was modeled on the Glasgow Women's Reproductive Health Service Unit, which was opened by William's mother Princess Diana in 1990 to serve women with major social problems.

Allison Wright, a mother of two under five, said the visit by the royal couple gave those who benefit from the program a chance to be seen as people "and not just a problem to be solved."

William and Kate's tour of Vancouver ended with a visit to the Kitsilano Coast Guard Station where the royal couple met first responders and discussed the mental-health implications of working in emergency services.