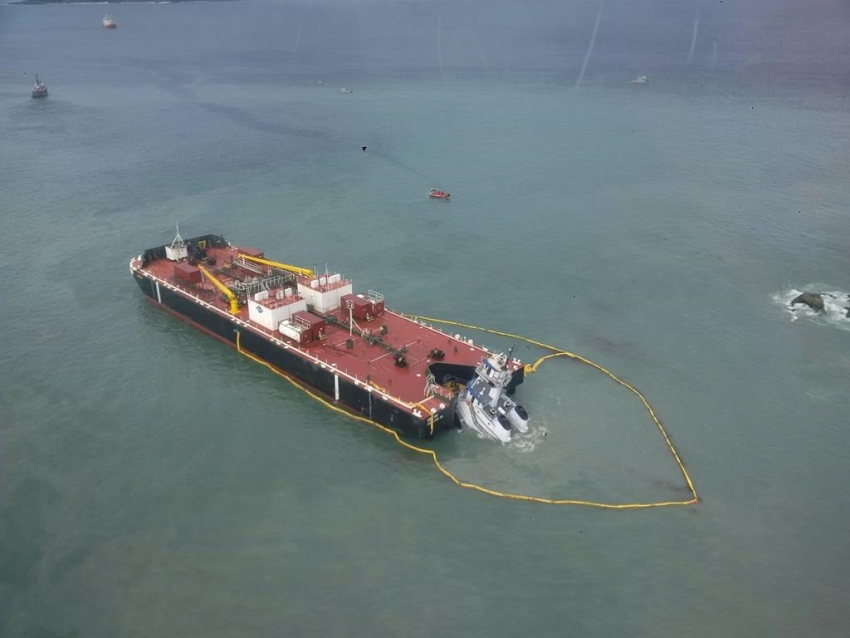 Salvage crews have begun the process of removing thousands of litres of diesel from a sunken 30-metre tug off British Columbia's central coast.

Divers began the operation late Monday afternoon by connecting equipment to fuel tanks aboard the Nathan E. Stewart, which rests in about nine metres of water at the mouth of Seaforth Channel, about 20 kilometres west of Bella Bella.

The operation is expected to take more than 40 hours, and with another storm due to hit the region tomorrow, crews have made plans to work through the night.

Federal Transport Minister Marc Garneau has released a statement announcing appointment of a minister's observer to ensure quick action if the Transportation Safety Board issues any early findings to prevent future groundings.

Garneau has also suspended the exemption that allowed the Nathan E. Stewart to operate without a pilot in Seaforth Channel, and the suspension applies to all vessels operated by tug owner, Texas-based Kirby Corp.

The tug went down last Thursday when it ran aground while pushing an empty fuel barge through the waters off the Great Bear Rainforest.

Efforts by the local First Nation, the tug's owner, Texas-based Kirby Corp., and the federal and provincial governments have been underway since then to avert a spill of more than 200,000 litres of diesel.

"The Nathan E. Stewart incident underlines the need for changes in the way we respond to marine pollution incidents, and that is why I am currently working on a coastal strategy to improve marine safety in a meaningful way," he said in the news release.

The Transportation Safety Board announced Monday it is gathering information and conducting interviews with crew members for its assessment of what went wrong, while the Heiltsuk Nation says the sinking could destroy clam beds vital to the community's culture and economy.

Once the tug's fuel tanks are emptied, there are plans to lift it from the water by crane and carry it on a barge from the area.