"If there’s no freedom of speech in Canada, and we continue accelerating climate change...then what’s the value of my home?” biochemist Lynne Quarmby said. 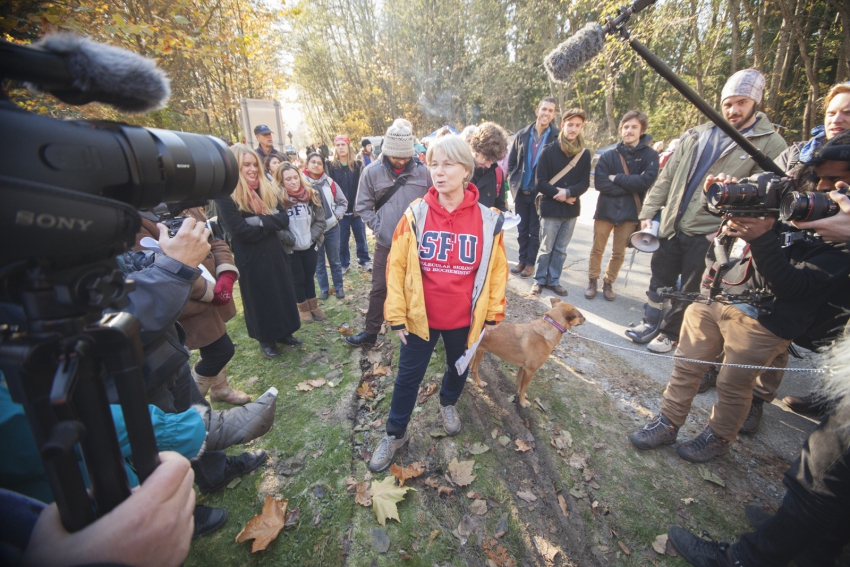 SFU biochemist Lynne Quarmby gives an impromptu media statement on Burnaby Mountain on Friday an hour after she was hit with an injunction. Photo by Mychaylo Prystupa.

She was the woman everyone on Burnaby Mountain was waiting for.  The accidental media star -- SFU professor Lynne Quarmby -- was immediately surrounded by cameras as she gave her reaction Friday to the injunction brought down against her and other pipeline protesters.  She vowed to continue her fight.

"It's not like we're on an edge we can retreat from," said Quarmby.

The mild-mannered biochemist, who has spoken and written her mind against the Trans Mountain pipeline expansion, said she is afraid her home could be taken by the legal troubles she now finds herself in with Texas-based Kinder Morgan.

But if that happens, so be it, she said.

“What is the value of owning my home and having retirement savings, if our world is spiralling into this negative space?"

Officially, she and other defendants -- a second SFU instructor, a retiree, an admin worker and a young activist -- are forbidden by a B.C. Supreme Court judge from interfering with the company's pipeline survey work.  The order takes effect Monday 4 p.m.  After that, RCMP are expected to arrest and charge those disobeying the court's wishes.

The defendant protesters have yet to see what legal bills or damages they'll face with the company's civil suit.  Defendants were disappointed the judge did not throw the civil suit out in his ruling today.

Kinder Morgan Canada's president Ian Anderson said earlier this week his main goal was to stop the protesters, not their freedom of speech.  He also said he worries for his staff's safety.

“I have no intention of pursuing any damages, if we can undertake the work that we know we have the legal right to complete,” said the executive Wednesday.

Quarmby was not comforted by the "if" in that statement.

She said she is not trying to "taunt" the company -- but if it comes after her home and assets, it would be the "world's worst PR disaster." 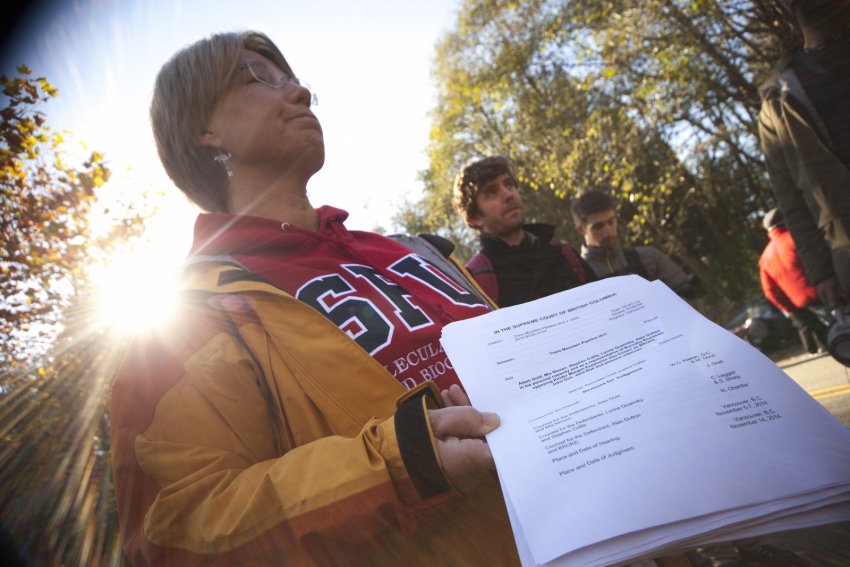 SFU Biochemist Lynne Quarmby on Burnaby Mountain Friday holding the Kinder Morgan injunction against her and other protesters.  Photo by Mychaylo Prystupa.

The professor first came to public attention on Oct.26 when the Vancouver Observer published her letter expressing her willingness to be arrested to stop the Kinder Morgan pipeline, planned to slice through Burnaby Mountain.

"In that op/ed, I commented that when I came and sat vigil in this site, I felt a growing sense of community with these people I had never met before, people from all walks of life, who were drawn together over their concern for this pipeline.”

“I stated that I would be willing to do civil disobedience if it came to that, which it hasn’t come to that yet.  For those two things, that were cited in court to demonstrate what a bad apple I am.”