Slew of lawsuits against Kinder Morgan could begin, say lawyers

Kinder Morgan up against "the strength of the Coast Salish First Nations." 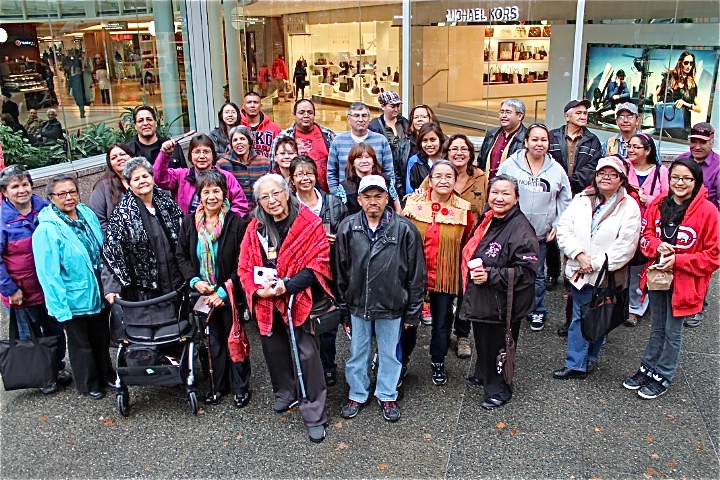 Members of the Coldwater Indian Band pose near the Federal Court of Canada on Georgia Street in Vancouver yesterday. Photos by Krystle Alarcon

A lawsuit the Coldwater Indian Band filed against Kinder Morgan could set precedent for a series of other legal battles, said both the pipeline company’s lawyers and an environmental lawyer.

Matthew Kirchner, who is defending the band, argued on Wednesday that Kinder Morgan was illegally operating the Trans Mountain pipeline on the  reserve. Coldwater is seeking a judicial review of an assignment to a right-of-way that Kinder Morgan has applied for to expand the pipeline’s production three-fold by twinning it.

The multinational company aims to carry 890,000 barrels of oil through its proposed Trans Canada Pipeline, up from 300,000. It has yet filed for a regulatory application process with the National Energy Board. If the board approves, construction of the controversial pipeline could start by 2016.

Both Kinder Morgan and the Minister of Aboriginal Affairs defended themselves yesterday. They presented very similar arguments countering Kirchner.

First, they took issue with the basis of the lawsuit. “It is at this point Coldwater decides to judicially review a decision that has not yet been made (by the minister), hijacking the first level of administrative process,” said one of Kinder Morgan’s lawyers, Maureen Killoran. Justice R. Hughe’s decision for the case could create a chain of legal battles against  Kinder Morgan, she said. “If the court tolerates this kind of motion, we are opening the doors to all of those who may have concerns,” she said.

“There’s nothing in the Indian act, or the indentures, and I’m going to suggest, there’s nothing in the Common Law, none of the cases (involving Aboriginal communities) suggest that the minister must follow Coldwater’s directions without taking into account anything else,” Isaac said.

James Mackenzie, who represented the Minister of Aboriginal Affairs, echoed several of Killoran’s and Isaac’s arguments. “We are in agreement with Mr.Isaac, that the crown’s duty is to impair minimally, prevent any exploitation. It has to balance Coldwater’s concerns and interests with the public interest,” Mackenzie said.

Like Killoran, he also expressed concern that the case would spark other First Nations to take corporations to court. “So Canada’s closed for business. Who’s going to invest, if all the contracts and assignments are subject to unreasonable and arbitrary interruption and disruption?”, Mackenzie said.