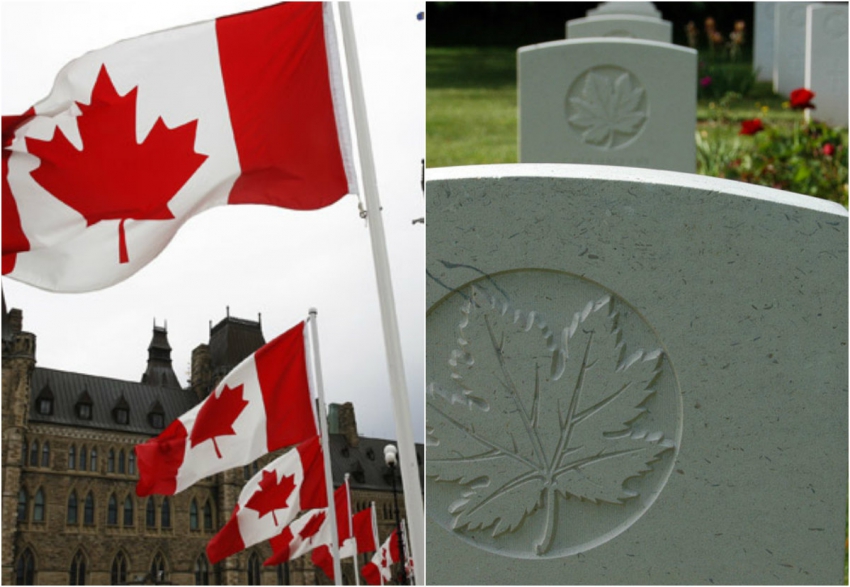 Left: Flags flying on Parliament Hill. Right: maple leaf engraved on grave markers at Beny-Sur-Mer cemetary in Normandy, France
"What does it matter that maple leaves adorn tombstones of various cemeteries in Europe...? Canada has lost none of its nationals during the last two World Wars, at least not officially," begins an article recently published in Le Monde, France's most famous newspaper.
"Because, according to Ottawa, Canadian citizenship never existed before the Citizenship Act on January 1, 1947."

It's a fact many Canadians don't consider as government officials honour soldiers on Remembrance Day, but the feds' official position is that Canadians who died during the world wars were never citizens, since they claim modern citizenship law only came into effect after the fighting ended.
That 1947 cutoff date poses enormous challenges for certain Canadians today. A 92-year-old Canadian war veteran, and an Ontario-raised war veteran's daughter are among those still fighting to be recognized as citizens, due in part because of their pre-1947 birthdate.
"It's really, really wrong. How is a government supposed to serve its citizens if it doesn't even know what a citizen is?" said citizenship advocate Don Chapman, who is a spokesperson for a group called the Lost Canadians — legitimate Canadians, some of whom served in the army and paid taxes in Canada for decades, only to discover they were disqualified from citizenship due to arcane provisions of old laws.
To clarify the federal government's views about citizenship prior to 1947, Chapman submitted a petition in November, urging the federal government to formally recognize the country's war dead as Canadian citizens.
Citizenship and Immigration Minister Christopher Alexander responded to the petition on Friday. After a long preamble about how "Canadians" have existed for centuries, it goes on to explain there were no laws to define that status before 1947, hence the soldiers were "British subjects."

It's an explanation Chapman disputes. He argues that Canadians didn't turn from subject to citizen at the stroke of midnight on the first day of 1947, because many were already de facto citizens well before that date.
"Do they really think everyone was a British subject, and then suddenly became a Canadian citizen after 1947?" Chapman asked, arguing that the two were never mutually exclusive. "Don't they realize British subject status only ended in 1977? Who said you can't be both? These soldiers fought for Canada, and the government is saying they weren't citizens of their own country?"

Excerpt from "Battle of Brains: Canadian Citizenship and Issues of War" (1943)