High winds of 40 to 60 kilometres per hour brought on a wave of local surfers to West Vancouver's Ambleside Park on Monday morning, who suited up and surfed the swells, against a beautiful backdrop of Lions Gate Bridge, downtown and Stanley Park.

On the water, Surfer Jonathan Reicher from Maple Ridge, who's been surfing for about 20 years on and off as a hobby, and keeps an eye on weather patterns and forecasts for the nearby bodies of water every single night. 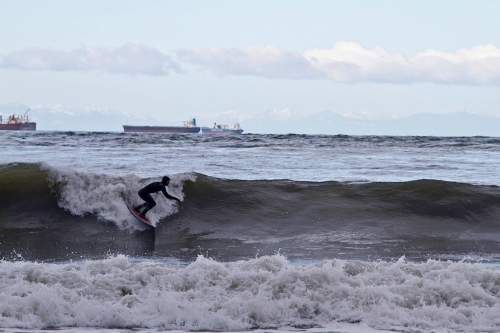 "It fills the void and gets the bugs out. The thrill of following the weather, and learning what makes surf happens, is all an aspect of local surfing that makes it more exciting, even if the waves are not great," said Reicher in an email to Vancouver Observer. 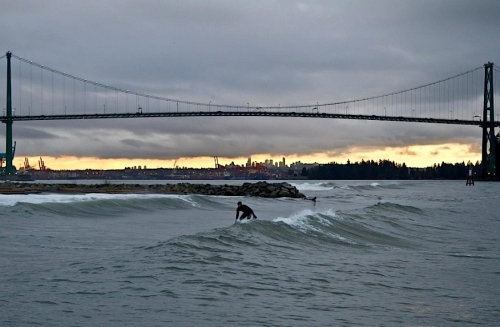 "If something is showing on the radar, and the stars align, the following morning he will set his alarm for 6 a.m. and then start the hunt," said his friend and photographer Jesse Holland.

"If everything goes according to plan, and many times it does not, then he'll find some waves at various locations around Vancouver.This usually only happens a handful of times every year, and if you are not too keen on learning about how the weather works, you will be unsuccessful."

But it's not just surfers who enjoy Vancouver's waters. Here's a video of dolphin pod swimming across English Bay on Sunday.