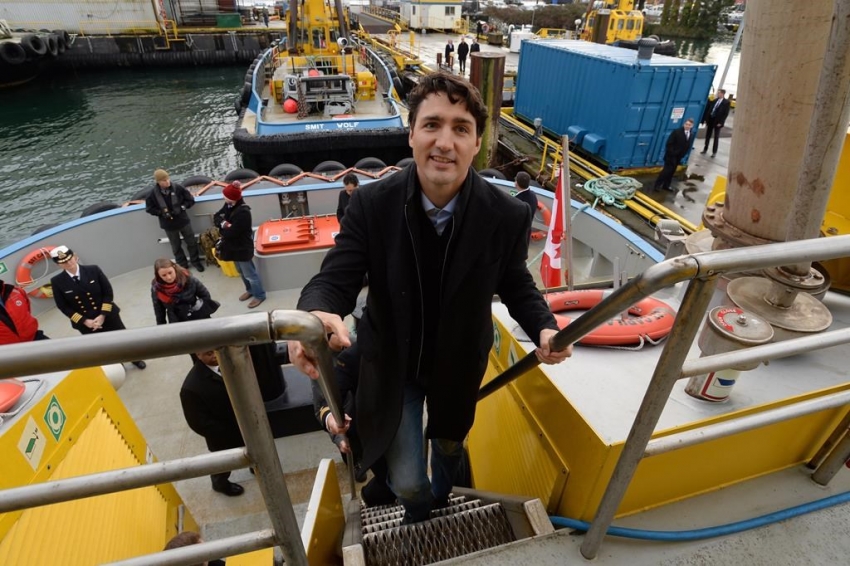 Prime Minister Justin Trudeau says two emergency towing vessels that were promised as part of a federal plan to protect Canada's oceans will operate on the West Coast.

Trudeau toured a Canadian Coast Guard tug in Vancouver on Tuesday to highlight the announcement.

The vessels will help the coast guard tow large commercial ships that are in distress and pose a hazard to navigation and the marine environment.

This is the prime minister's first visit to the city since his government announced its support late last month for the expansion of Kinder Morgan's Trans Mountain pipeline to the Vancouver area.

The expansion would triple the capacity of the pipeline between the Edmonton area and Kinder Morgan's marine terminal in Burnaby, B.C., and increase the number of tankers using the terminal from five to 34 a month.

"Both of these vessels will operate on Canada's West Coast and help to keep large disabled vessels off B.C.'s pristine coasts," Trudeau said in a news release.

The pipeline expansion has drawn opposition in the Vancouver area, including from Mayor Gregor Robertson.

B.C. Environment Minister Mary Polak said she welcomed the additional details from Trudeau about the Oceans Protection Plan, specifically its decision to add a second rescue tug for B.C.

"Having a tug stationed on the southwest coast of Vancouver Island is something we had requested, to ensure a world-leading response capacity for current levels of marine traffic," she said in a news release.

Premier Christy Clark has insisted for years her government will only support new heavy-oil pipelines in B.C. if five conditions are met, including a marine oil-spill response, prevention and recovery system.

During the tour of a bright-yellow-and-blue tug in Vancouver's harbour, a gleeful Trudeau was able to try his hand at steering the vessel.

As he rotated the tug, he grinned and joked, "You shouldn't give me toys like this."

Trudeau spoke to coast guard officials about the importance of the organization in English Bay, remarking that he knows it is needed from his own experience sailing in the area.

Earlier this year, his government reopened the Kitsilano Coast Guard station, which had been shuttered by the previous Conservative government as a cost-cutting measure.