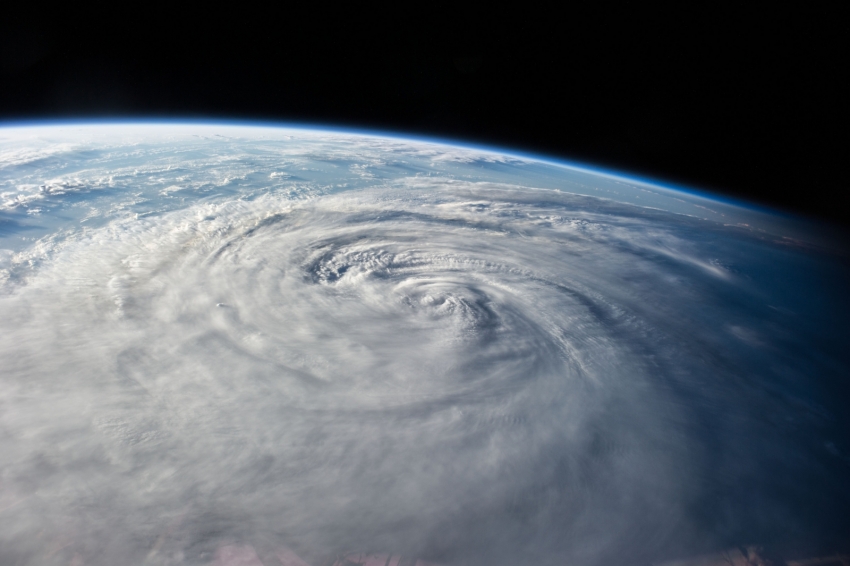 A typhoon as seen from low Earth orbit. Reference photo from Wikimedia Commons.

Michelle Kunimoto’s bachelor degree in physics and astronomy sent her on a journey out of this world—and led to the discovery of four new worlds beyond our solar system.

The planets, designated “planet candidates” until independently confirmed, are exciting discoveries. Two are the size of Earth, one is Mercury-sized, and one is slightly larger than Neptune. But it’s this last one, the largest of the four, that is of special interest.

Officially catalogued as KOI (Kepler Object of Interest) 408.05 and located 3,200 light years away from Earth, the planet occupies the habitable zone of its star where the temperature would allow liquid water and maybe life.

“Like our own Neptune, it’s unlikely to have a rocky surface or oceans,” said Kunimoto, who graduates today from UBC. “The exciting part is that like the large planets in our solar system, it could have large moons and these moons could have liquid water oceans.”

“Pandora in the movie Avatar was not a planet, but a moon of a giant planet,” said Jaymie Matthews, a UBC professor of astronomy.

While the possibility of life is enticing, Kunimoto was excited about the discovery for other reasons. As part of a course designed to give astronomy students research and career experience, she spent months sifting through data from NASA’s Kepler satellite, trying to find anything that other scientists overlooked.

The Kepler space telescope spent four years staring at about 150,000 stars in our own galaxy, looking for periodic changes in the brightness of stars over time and collecting data known as light curves.

“A star is just a pinpoint of light so I’m looking for subtle dips in a star’s brightness every time a planet passes in front of it,” said Kunimoto. “These dips are known as transits, and they’re the only way we can know the diameter of a planet outside the solar system.”

The larger the orbit, the fewer transits you see. Which is why the discovery of this warm Neptune is so rare. It takes 637 days for the planet to orbit its sun. Of the nearly 5,000 planets and planet candidates found by the Kepler satellite, only 20 have longer orbital periods than KOI 408.05.

Kunimoto and Matthews have submitted their findings to the Astronomical Journal. In September, she’ll be returning to UBC to begin a master’s degree in physics and astronomy, hunting for more planets and investigating whether they could support life.