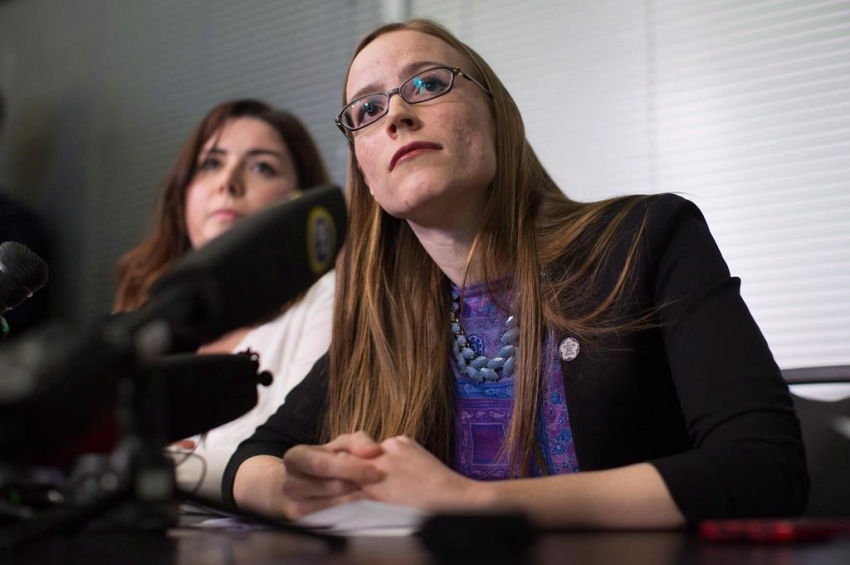 Glynnis Kirchmeier, filed a human rights complaint against UBC over the school's handling of sexual assault reports. Photo by The Canadian Press.

A former University of British Columbia student who filed a human rights complaint over the school's handling of sexual assault reports says mediation ended unsuccessfully after 90 minutes on Monday.

Glynnis Kirchmeier says she cannot disclose what happened during the early settlement meeting due to a confidentiality agreement, but she is pushing ahead with her case.

She filed a complaint in March with the BC Human Rights Tribunal, which said UBC didn't act on numerous complaints about a male PhD student over long periods of time, resulting in more students becoming victims of sexual violence.

Kirchmeier says she filed the complaint both as an individual and on behalf of anyone who has alleged sexual assault, sexual harassment or sex discrimination to the university.

None of the allegations has been proven, but the school promised to create a stand-alone sexual assault policy in November 2015 after Kirchmeier and other women came forward with complaints about UBC's handling of the case.

The university is currently consulting with students, faculty and staff on a draft policy, which has been criticized for continuing to rely on the school's general Non-Academic Misconduct process to discipline students accused of sexual assault.

"It's been a year since they promised to do better and I don't see them incorporating that promise in a way that makes me think that it's safe to drop the complaint," says Kirchmeier.

Sara-Jane Finlay, UBC's associate vice-president of equity and inclusion, said the university participated in the meeting but can't comment on what took place because there are ongoing legal proceedings.

Kirchmeier says the tribunal has asked her and UBC to make submissions on whether her complaint was filed within the necessary time limit. The tribunal requires a complaint to be filed within six months of the most recent discriminatory action.

As long as the complaint is not thrown out, the next steps will be for the university to file its response and for the disclosure process to begin.

The BC Human Rights Tribunal's website says that if parties cannot resolve their issues through mediation, the responding party can reply to the complaint and apply to dismiss it without a hearing.

The tribunal says it holds a hearing if the parties cannot resolve a complaint and it is not dismissed.

Kirchmeier has developed 44 recommendations for how the university could better respond to complaints of sexual misconduct, including changes to policy and training.

She says the real issue is equal access to education because women who report sexual misconduct often end up leaving the university.

Sexual violence at Canadian universities has received growing attention recently, and Kirchmeier is not the only person alleging a school's response violates human rights.

Note to readers: This is a corrected story. An earlier version misspelled Sara-Jane Finlay's name.