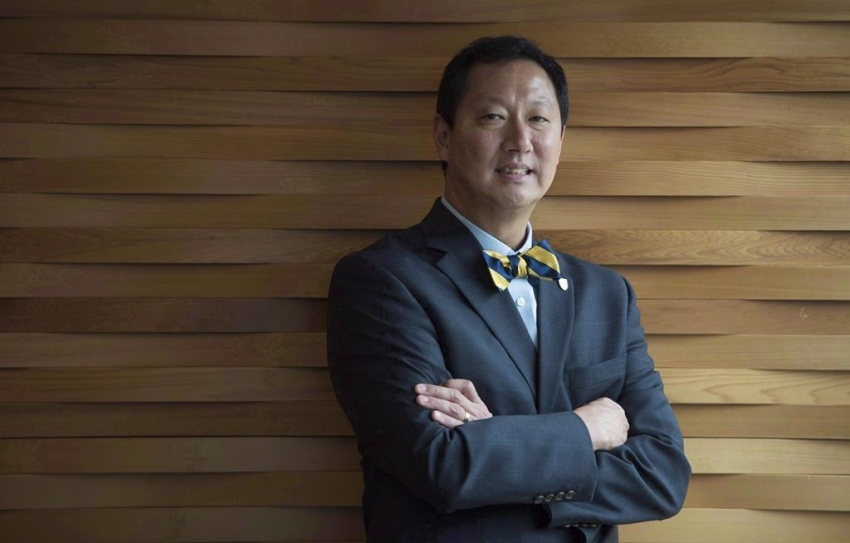 President of UBC, Professor Santa Ono. Photo courtesy The Canadian Press.
University of British Columbia president Santa Ono has issued an apology for the school's decision to cancel a planned speech by former Vancouver Olympic CEO John Furlong.
Ono says in a statement he "deeply regrets" the university's choice, which was made without his knowledge, and its decision-making "did not meet the standard he is eager to instill."
The university removed Furlong as keynote speaker from a February fundraising event for student athletes last month, after UBC graduate Glynnis Kirchmeier circulated an open letter critical of him.
Kirchmeier, an activist who has been critical of the university's handling of campus sexual assaults, said that inviting Furlong to speak was at odds with UBC's commitment to reconciliation with First Nations people.
Furlong has steadfastly denied allegations in a 2012 newspaper article that he beat and taunted First Nations children while teaching at a northern B.C. school in 1969 and 1970.
He dropped his defamation lawsuit against journalist Laura Robinson, so the allegations have not been tested in court, but Robinson lost her own defamation suit against Furlong, with a judge ruling her reporting constituted an attack on his character.

The RCMP has said an investigation into abuse allegations concluded without charges.

Furlong accepted Ono's apology in a statement. He said UBC had recognized that its decision caused him and his family "deep hurt and embarrassment."

"I appreciate the massive outpouring of support from friends, community and government leaders, perfect strangers and many engaged at UBC," Furlong said.

He asked donors to support the event for student athletes on Feb. 28. Furlong said he trusted that UBC would donate his full speaking fee to the fundraising effort, as he had intended to do.

"I wish the event every success and trust that this most disheartening, humiliating experience can be a tipping point for improvement and that there can be some lasting good achieved."

University spokeswoman Susan Danard said the school had received "strong feedback" from a number of people with diverse views about Furlong's planned appearance at the event.

She said the athletics department made the decision on Dec. 22 to cancel the speech, in order to "keep the event focused on its primary goal of supporting student athletes."

The athletics department did not immediately return requests for comment.

Danard said Furlong had not been invited back to speak at the February event. A review of the decision-making process is underway, and following that review, he could be contacted for future events, she said.

Ono said in his statement that the decision was made in good faith, albeit without proper consideration of its impact on Furlong or his family.

"While a modern university should neither court nor shy from controversy, our decision-making should be the result of a robust deliberative process," Ono said.

Kirchmeier, who has filed a human-rights complaint over the university's handling of campus sexual assaults, said in her open letter last month that inviting Furlong to speak was at odds with UBC's commitment to reconciliation with First Nations people.

She said in an interview that she was outraged by Ono's apology. Kirchmeier said it appeared the university cancelled Furlong's speech to avoid controversy, but now that the cancellation has caused controversy, administrators are scrambling in the other direction.

"It's really appalling, and it really shows how careless they are about the issue of ... violence against aboriginal people. Everything they say they care about is just a fabrication."