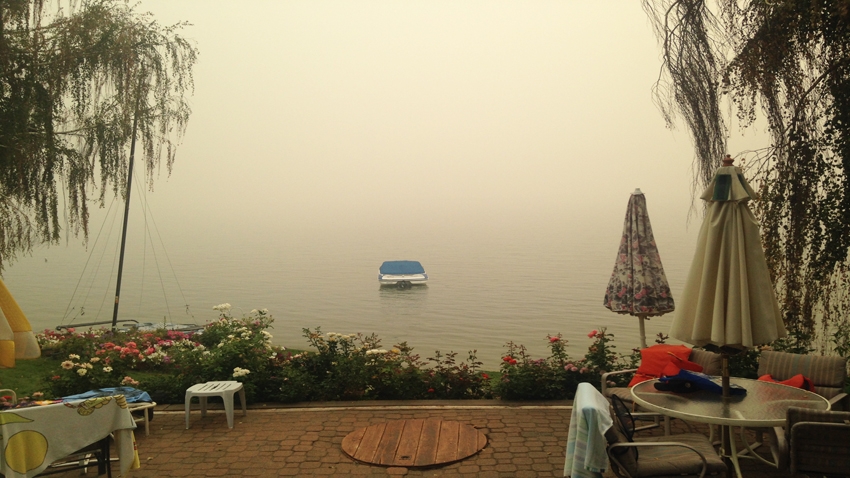 Vacationers in one of B.C.'s top travel destinations are cutting their holiday plans short, after a weekend of contending with thick smoke.

Thousands of visitors and locals in the Okanagan woke up to a brilliant sunny Saturday morning but by afternoon were retreating indoors as winds blew thick smoke north from raging Washington wildfires, one just five kilometres from the Canadian border.

Winds drove smoke from several fires raging south of the border, which has claimed the lives of three firefighters, blanketing much of southern British Columbia in a thick haze. The B.C. Wildfire Service issued warnings of poor visibility and air quality issues Sunday, while many vacationers cut their losses and headed back to the city.

A series of wildfires in Washington state has grown to 968 square kilometres, and includes the Stickpin fire burning about 4.5 kilometres south of the Canada-U.S. border.

Fire information officer Fanny Bernard said the Canadians will be responsible for a northeastern branch of the 192-square kilometre fire.

The fire is still burning out of control, but Bernard said it isn't threatening to cross into Canada anytime soon.

"It's holding steady away from the border," she said. "There's no significant growth towards the north."

Another fire scorched the area in 2003, which is helping prevent the flames from spreading north, Bernard explained.

"Burns like that remove a lot of fuel from the fire's path, so that would have played a very large role in slowing it down," she said.

While the haze is expected to linger over B.C. for the next few days, officials say a massive cloud of smoke was expected to lift over Washington later Sunday.

But Suzanne Flory, a spokeswoman for the U.S. Forest Service and the Rocky Mountain Incident Management team, said that may not be good news, because it could cause the fire to become more erratic and intense.

"It's like a flue opening in a fireplace," Flory explained. "Smoke serves as a cap on the fire."

- With files from The Canadian Press and The Associated Press