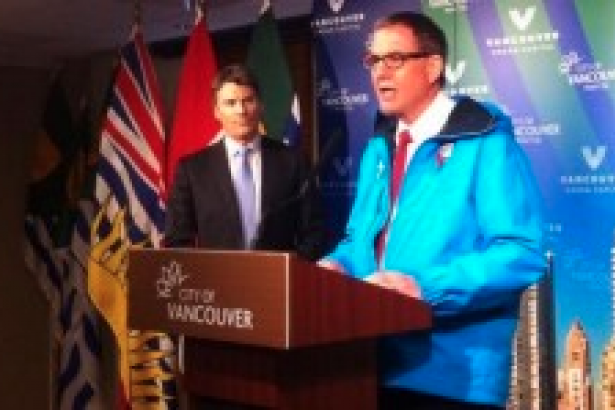 A motion for equality

Vancouverites may have covered their ears as Irish House partied into the wee hours during the 2010 Olympics, but they were cool with Pride House.

Mayor Gregor Robertson seconded a motion put forward by Councillor Tim Stevenson that strives to ensure that Pride Houses and equality for the LGBTQ community is an integral part of future Olympic and Paralympic Games.

The motion, titled "Olympic and Paralympic Pride House Initiative (pdf)", will be voted on during City Council's December 17th session.

“As the prior Olympic Winter Games host city, Vancouver is deeply concerned about the impact that Russia’s new anti-gay propaganda law is having on both the Russian and visitor LGBTQ communities,” said Robertson. “The Olympic Games should be the showcase for diversity, fairness and inclusion, which we demonstrated in both Vancouver and Whistler in 2010 with Pride Houses that provided safe spaces and resource centres for LGBTQ athletes, coaches, spectators and other visitors.”

Vancouver has stood against Russia's anti-gay legislation since Day One. Supporters of the initiative include Canadian Olympic gold medalists Beckie Scott, Ashleigh McIvor, and Jon Montgomery; the former CEO and Executive Director of the Vancouver 2010 Four Host First Nations Secretariat, Tewanee Joseph; and You Can Play, the advocacy group founded by Patrick Burke that works to eradicate homophobia in sport.

Choke on our love, Putin

More than just championing the idea of Pride House and what it stands for, Clr. Stevenson's motion would see a Vancouver delegation show up in Sochi to rub our inclusiveness and compassion all up in Vladimir Putin's face:

The motion also recommends that Councillor Stevenson, as deputy mayor in February 2014 - the month of the Olympic Games - lead a small delegation consisting of Stevenson, project manager/VANOC alumni Maureen Douglas and Pride House co-founder Dean Nelson to Sochi as official representatives for Vancouver, the host city for the last Olympic Winter Games. They would be on-site for a few days at the start of the Sochi 2014 Games to advocate for this proposal with IOC members.

“I was thrilled to visit Pride House in Whistler and share Canada’s medal with everyone and anyone who was willing to be a part of what we accomplished together as a country, as friends, and more importantly, as equals,” said Jon Montgomery, who took Gold in the men's skeleton at the 2010 Winter Games. “We celebrated, men and women, regardless of sexual orientation, together and proud, in the spirit of sport. I would hope that the IOC does whatever it can to protect the rights of its athletes, stand up for equality amongst all races, genders, and sexual orientations, and be a leader of change.”

“As the Executive Director and CEO of the Four Host First Nations Secretariat that served to ensure inclusion and equality for Aboriginal people in the context of the Vancouver 2010 Olympic and Paralympic Games, I enthusiastically support this motion being brought forward to Vancouver City Council,” said Tewanee Joseph. “Equality means inclusion, acceptance, safety and respect for everyone. No exceptions. The Olympic and Paralympic Games should serve as one of the best examples of this in the world.”

Whether or not the IOC will listen is a different matter entirely. While we approach the Olympics with the spirit of sports fans, the IOC approaches the games as a business exercise. Meanwhile, Vladimir Putin is not exactly famous for caring what other people think.

Stevenson's initiative will be entirely funded through private community contributions, not City funds. The City of Vancouver has established a reserve fund for contributions that will be used explicitly for the Pride House Sochi mission.