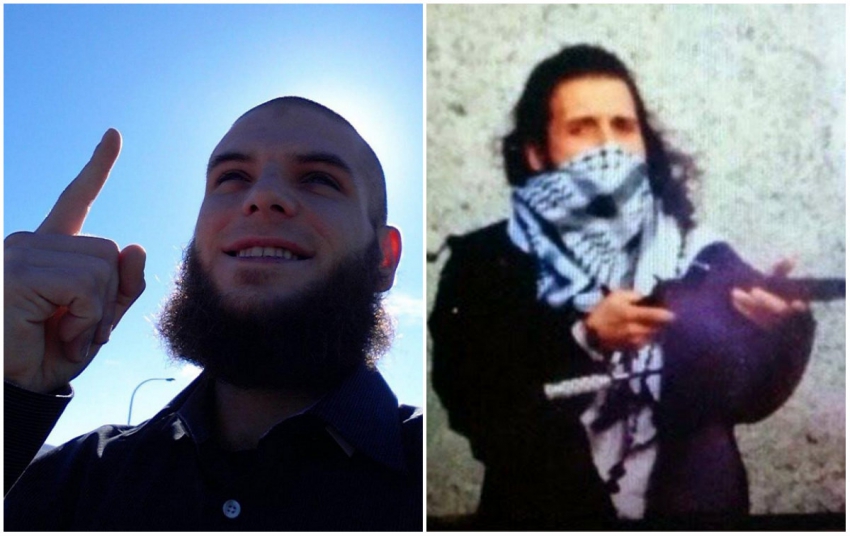 Martin Couture-Rouleau, a suspect in the Quebec terror attack on Monday (left) and Michael Zehaf-Bibeau, the deceased shooter from the Ottawa shooting today (right). Neither are from Iraq themselves.

"We're against any aggressions. We escaped from our country because of these terror groups....it's sad," Iraqi Canadian Association president Dhiaa Raheem said, after news of the Ottawa shootings that left one soldier dead today. "We're supporting the Canadian government and peace all over the world."

The attacks are believed to be motivated by Canada's controversial entry into the Iraq war. The shooting happened just one day after Canada sent war planes to Iraq and two days after an Islamic extremist killed one Canadian soldier and injured another in Quebec.

But both the suspects --  Martin Couture-Rouleau in the Quebec attack and Michael Zehaf-Bibeau in the Ottawa shooting -- are Canadian-born men and not from Iraq, or of Iraqi background.

Rouleau was said to be a relatively recent convert to Islam while Zehaf-Bibeau was at odds with the Muslim community in Burnaby. Even though Rouleau was not in contact with ISIL, Islamic State supporters gave messages of support for his attack, which came one month after an ISIL spokesperson encouraged people to "kill" Canadians and "run over" a victim with a car. He was said to have posted ISIL flags on social media and wrote on Facebook that "disbelievers" were destined for the "fire of hell".

As for Zehaf-Bibeau, reports say ISIL did not coordinate his attack, and some argue that his actions were more a result of mental illness rather than religious extremism. However, reports say he was reading ISIL messages calling for attacks, and ISIL sympathizers congratulated his shooting, saying Canada was "paying the price for intervention". He was known to hold "radical views", was in contact with an accused terrorist, and had recently applied for a passport to go to Syria.

Raheem said many Iraqis have been victims of attacks by religious extremists, and are not interested in pursuing ISIL's fundamentalist mission.

"We have an Iraqi association. I'm the president, and I'm a Catholic guy. The vice president is Sunni Muslim, and we have Shiites too. We're all like brothers. We escaped to Canada because of what happened in Iraq."

Raheem said he used to be a university professor in Iraq during the 1990s, but when war broke out with the U.S. invasion in 2003, he fled to Sweden, and five years later, came to Canada.

"The others in our association came through the United Nations. They escaped killings, kidnappings (in Iraq)...they escaped and entered Jordan, Turkey and other countries." He said his association tries to work with the federal government to bring victims who have been displaced by ISIL to Canada.

He said his organization was non-political, and that it had taken no position on Canada's mission in Iraq, but that he and others understood that many Canadians were trying to help Iraqi victims.

Although social isolation and discrimination are sometimes cited as reasons for young men turning to terrorism, Raheem says Canada generally doesn't have these problems.

"Everybody has rights, and has work to do here. Some countries do have bad discrimination, but here, no -- you can see Muslims, Arabs, Africans, Chinese. We're all Canadians, and we love the country we're living in."