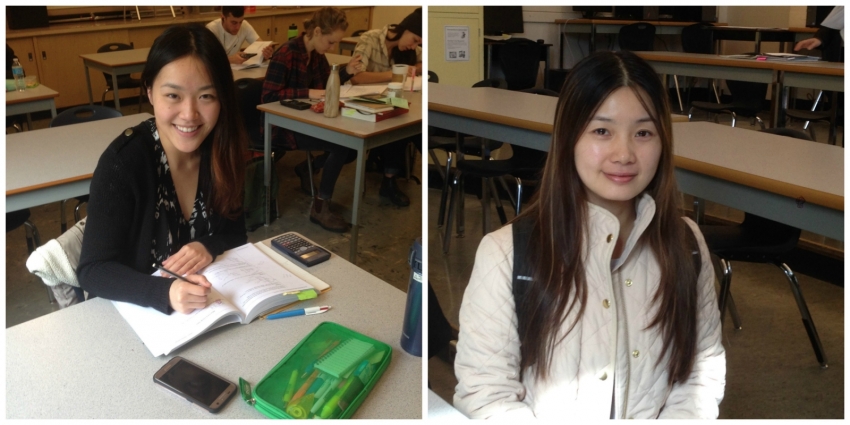 Priscilla Ong, left, graduated from Killarney Secondary in Vancouver and is taking science courses through the VSB's adult education program so she can get into BCIT. Mindy Xie, right, is upgrading her English skills and wondering how she'll pay for the high school courses she'll need to get into post-secondary programs. Photos: Hollie Williams.

Getting elected to public office is overwhelming at first and if you’re lucky, you get advice from more experienced colleagues to help you manage your new role.

One of the best tips I got was to make sure I went to the Vancouver School Board’s (VSB) adult education graduation ceremony. A couple of seasoned trustees told me it was the best annual event in the district.

The Globe and Mail’s Gary Mason wrote a wonderful column five years ago titled “The School of Second Chances.” He captured the joyous, triumph-over-adversity spirit of the event which he described as “more profound than anything you experience at your standard high-school grad.”

I went on to attend seven of them over the years and had the honour of speaking at most. I shed joyful tears every time.

I spoke at regular high-school grads too. I loved those events. Grads are celebratory, hopeful occasions brimming with gratitude, relief and excitement.

But the adult education grads took that up several notches. The valedictorians’ stories were unique and awe inspiring. Some had endured perilous journeys from far-flung lands — where in some cases they couldn’t attend school — to make their way to Canada where they struggled to build new lives.

Some had taken time out to care for family members — their parents or their own children. Some had overcome illness, addiction or other setbacks and were now determined to get on with their education and pursue dreams. So many dreams — all involving post-secondary programs.

Many had juggled family responsibilities with jobs and still managed to excel in their adult education courses. Those courses gave them the prerequisites they needed to get into programs they needed to make their dreams of becoming doctors, scientists, teachers, nurses, lawyers and more come true.

Their adult education courses open doors to their futures. Many had already been accepted into programs and had earned scholarships to pay their way.

Sadly the thriving program Mason described has been diminished in the past few years.

That’s right. In this troubling era of rising inequality, lack of affordability and so many people joining the ranks of the “working poor,” access to funded programs that enable adults to acquire the high-school credits they need to go on to post-secondary education or training programs has been blocked for many.

She says government’s 2014 cancellation of its “education guarantee” is a formula for “how to hold someone back in life.” Williams says single mothers, aboriginal women and new immigrants are overrepresented in adult education programs and are disproportionately affected by government funding cuts.

“Women who’ve put their education on hold to care for family members discover their high-school credits may not be enough, or may not be recent enough, for them to get into post-secondary programs. Then they discover they’re going to have to pay $550 a course to complete them. For some, that’s just not possible,” says Williams.

These cuts don’t just affect students who didn’t take the right courses or get good enough marks. Applicants to programs like the B.C. Institute of Technology’s (BCIT) Medical Laboratory Science program must have completed their biology, chemistry and math within the past five years.

Otherwise they need to do it again, and it will cost them $550 for a course that was fully funded until two years ago. So even if they got straight A's, if they did so over five years before, they have to do the courses again.

The Education Guarantee — no money back for “graduated adults”

In 2008 the B.C. government created the “education guarantee.” It was one of their better moves. It promised free high-school upgrade courses for adults through B.C. school districts and public colleges.

Thousands of students were able to complete or upgrade high school courses they needed to access post-secondary programs that would improve their employment prospects and enable them to move up from mini-wage, part-time work.

It was so successful that enrollment exceeded expectations. But in 2014 government abruptly made a mean-spirited and short-sighted decision to renege on their “guarantee” and announced that students who’d graduated at any point would have to pay for any courses they needed to get into postsecondary programs.

BC government action needed to protect privacy of student data