B.C. roasts thanks to bad forest policy and climate change 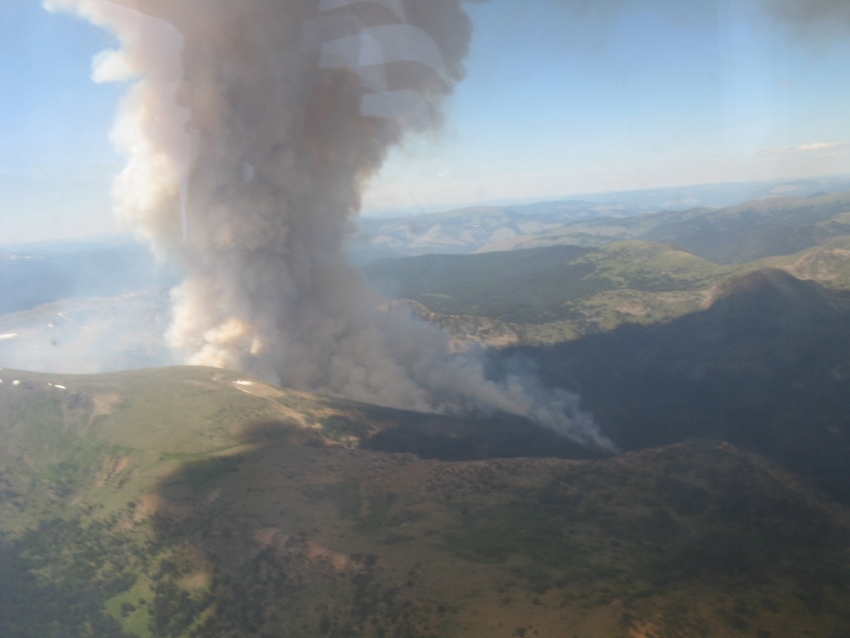 A recent image of a forest fire near arid Keremeos.

Provincial fire information officer Kevin Skrepnek wasn’t encouraging when he said, a couple of days ago: “There’s no relief in sight in the weather forecast. We’re expecting temperatures in the mid-30s, and absolutely no rain in the near future. That’s definitely cause for concern.”

But B.C.’s forest fire crisis, which led on July 3 to a province-wide ban on all outdoor fires, began, in reality, not with this year’s unseasonably warm, dry spring, but over a century ago — specifically in the year 1912.

That’s the year that the BC Wildfire Management Branch began aggressively suppressing naturally-occurring fires in the woods. It’s been doing this ever since, allowing dangerous levels of easily combustible fuel to build up on the ground.

Thus the stage has been set for today’s calamitous situation, made far worse by global warming and by an 11-fold increase in B.C.’s population since fire suppression began.

As of this weekend, 90 per cent of the $55 million allocation set aside this year by Christy Clark for fighting forest fires in B.C. has been spent.

But this projection was absurdly low.

B.C. wildfires vary enormously in number and size each year, and in the dollars spent on suppression as well. This last can vary from a high of nearly $400 million in 2009 to a low of $21 million in 1999. The average cost is just under $150 million — nearly three times what the government allowed for this year.

So here’s the problem: take a century of aggressive forest fire suppression, and add in accelerating climate change fueled by burning fracked gas (remember, that’s the basis of Christy Clark’s vision of the B.C. economy), oil (Prime Minister Stephen Harper’s beloved oil sands are just on the other side of the Rockies), and carbon emitted from B.C.’s dead, dying and burning forests which have changed from a carbon sink to a carbon source.

Toss in a large dollop of population growth, and it’s clear that Canada’s western-most province is faced with a human-created “perfect storm."

Since relentless forest fire suppression began over a century ago, burnable fuel has been accumulating throughout the 84 million hectares of B.C. woods, causing fires to now burn with a greater intensity and do far more damage to forest integrity than before Europeans came to this part of the world and began protecting timber as a market commodity.

Canada averages about 9,000 forest fires a year, which burn on average 2.5 million hectares of trees. Canada’s various governments spend between $300 million and $500 million a year on fire suppression costs. These costs have been characteristically focused on addressing purely human concerns: “Fires near communities, industrial infrastructure, and forests with high commercial and recreation value are given high priority for suppression efforts.”

Scientists and others have known for years that this was a failing strategy, and have counselled against relying on it.

A decade ago, the Ontario Environment Commissioner delivered a scathing review of the Ontario government’s Forest Fire Management Strategy, prepared in the year 2000, and implemented four years later. The Commissioner noted that “there are serious inconsistencies… based on giving priority to short-term wood supply over the ecological role of fire in some areas.”

The Commissioner went on to summarize, a decade ago, and in precise language, the problem we now face in B.C.: “Catastrophic fires may occur, for example, when fires have been suppressed, because forest fuels have been allowed to accumulate that otherwise may have been consumed naturally by smaller fires. Catastrophic fires that are the result of suppression and excessive fuel loads do not mimic normally occurring forest fires, but burn with a much greater intensity and at a much larger scale.”