How, exactly, do you clean an oil-slicked, angry goose? This may become useful information in the next few years.

The rain stopped and I went running. It's a beautiful morning in Vancouver, and the geese and ducks are taking their fuzzy kids for a walk in Sutcliffe Park. I didn't check the news before I dashed out the door, I just laced up my shoes and ran.

As I parted ways with my pub trivia team last night, I already knew what the headlines would be shouting: the words "Clark", "Victory", and "Surprise" figuring among them.

Sure enough, Christy Clark and the Liberals managed a stunning upset in the provincial election, as Adrian Dix and the NDP squandered a 20-point lead. Clark was unable to secure her own riding, though, losing to the NDP's David Eby: payback for the last go-round.

Clark will surely run in an upcoming byelection, challenging a seat in some other riding where she doesn't actually live. In the meantime, people are rejoicing. By "people", I mean, "those with a financial stake in oil and mining."

What a great day to be an energy-company CEO. What a terrible day to be a political pundit. If you're a local political forecaster, you're the opposite of Nate Silver today. That dude is the Criss Angel of statistics, whereas our lot is wondering how they failed to translate the NDP's decaying lead as a potential Liberal upset.

I've seen the detergent commercial where they scrub dirty birds free of crude, but the actual mechanics of it must be quite difficult. How do you clean your first duck? How do you hold it so that it doesn't get injured? So that it doesn't bite you? A duck bite hurts, though not as much as a penguin bite. Don't ask me how I know this, just trust me. Canada geese, those guys have bad attitudes at the best of times.

Encana. Enbridge, particularly the Northern Gateway Pipeline LLC (though Enbridge itself also contributed to the NDP). Enbridge in particular is good at introducing oil to water, but not very effective at getting it back out.

So now we have a party in power for the next four years that may as well wear Big Energy's logos on their jackets, NASCAR-style. Victoria will do as it's told and try to push through the Northern Gateway Pipeline to the proposed Kitimat mega-refinery. Diluted bitumen will get loaded onto big ol' ships, which will move shoulder-to-shoulder through English Bay. What could possibly go wrong?

Sure, BC will get a taste of the profits, but the province will bear all of the real-world risk. All of it. That risk, by the way, is palpable. The Enbridges and Encanas of this world are your best buddies when it comes to getting you into power so you can give them what they want, but good luck getting them to take responsibility for a spill.

Yeah, so it's a bad day to be a duck. Or a goose. Dolphins, orcas, basically anything that swims: they're all checking craigslist further down the coast for new places to live.

As I ran back along the seawall, people were lining up for the Lobsta Truck down by the docks. So it's also a pretty bad day to be a lobster.

Christy Clark begins her victory speech with an ironic "Well, that was easy." Clearly she's never had to sponge oil off a duck. 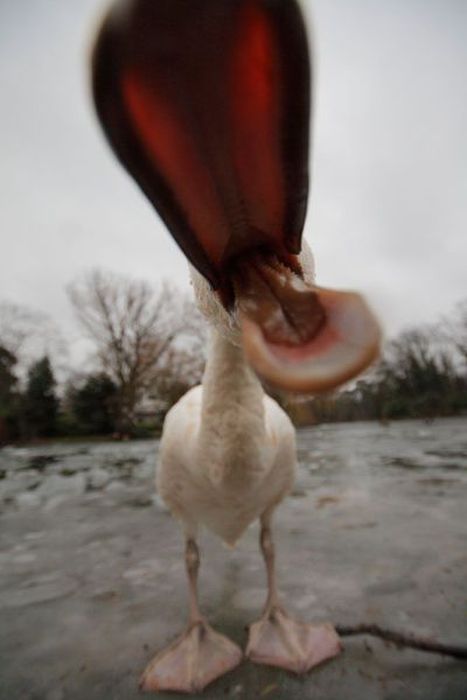