Is it time to follow the example of Chile and Quebec and protest against high tuition and student debt? 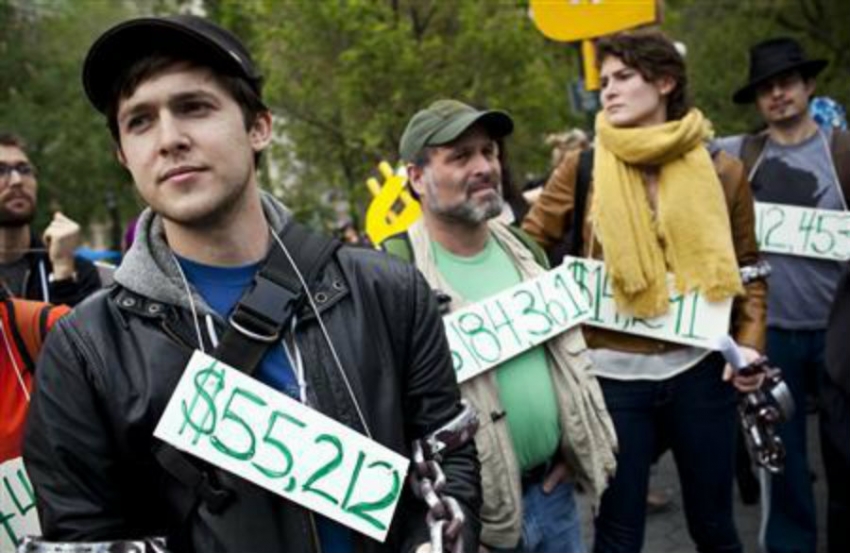 When CBC's national phone-in program, Cross Country Checkup, recently asked if young people are getting the post-secondary education they need, the question opened up an old sore in Canada’s body politic.

For the last three decades, Canadian governments, at the federal and provincial level, have been turning education into a business increasingly accessible only to the wealthy.

I sat down several weeks ago with four student representatives at Okanagan College in my home town, Salmon Arm. I asked them what they were studying and why.

Every single one said they had abandoned their dreams of studying what really interested them, instead choosing a field where they thought they had a better chance of making money.

Each had a slice of the crushing national student debt, now close to $15 billion, hanging over their heads: for university graduates in Canada, the average debt-load is close to $27,000.

Post-high school education, for Canada’s young people, has turned an entire generation into candidates for a debtor’s prison, indentured servants whose career futures are inextricably bound to the money they owe. With few exceptions, our national leaders appear unmoved by the concept of an educated citizenry being a national asset. There are hardly any musings on learning more about the world, or the excitement of discovery about oneself and others.

Prime Minister Stephen Harper’s answer to alarming levels of student debt is to pile on more, through his Canada Apprentice Loan initiative, which will add another $200 million to the debt load of students in skilled trades. Contrast this to the recent proposal by President Obama, that the first two years of college education should be free.

Or compare this to countries like Cuba, where – despite all the criticism of Fidel Castro – education has been free up to the doctoral level for decades.

This helped Cuba to survive the collapse of the Soviet Union’s support in 1989, and develop, almost overnight, into a world-leading position in large-scale organic farming.

While most OECD countries have been maintaining or increasing their support for students, Canada’s has been slipping – from 80 per cent coverage of fees to 57 per cent in the last 20 years.

One country stands out, however, as a model for a new commitment to education: Chile.

Three years ago, Chilean students went on strike for eight months over the lack of financial support for education, compounded by the emergence of elite and expensive private colleges and universities under murderous dictator Augusto Pinochet.

Government crackdowns only increased public and international support, and eventually the conservative and authoritarian regime of former President Sebastian Piñera was swept aside and the progressive Michelle Bachelet won a decisive mandate in 2013.

One of her first acts, finally signed into law last September, was to make education free for all students by the year 2020.

She did this by increasing corporate taxes for the richest corporations from 20 per cent to 25 per cent, which is something Stephen Harper has repeatedly said will ruin the economy.

But there is no evidence that the Chilean economy has, in fact, suffered at all.

She rolled back the private educational institutions that flourished under the brutal Pinochet regime, and were continued by Piñera, his conservative successor.

These for-profit institutions had taken over the college scene, and massively contributed to student debt.

Both exist in taxation systems that favour corporate profitability over all other concerns. Both foster crippling student debt loads. Both encourage private, for-profit education.

This made news headlines a few weeks ago when Everest College, an Ontario-based “private career college” with 14 sites, and partially funded by the provincial government, had its government stipend cut off because Ontario stated it could no longer be “financially responsible” for the private corporation’s operation.