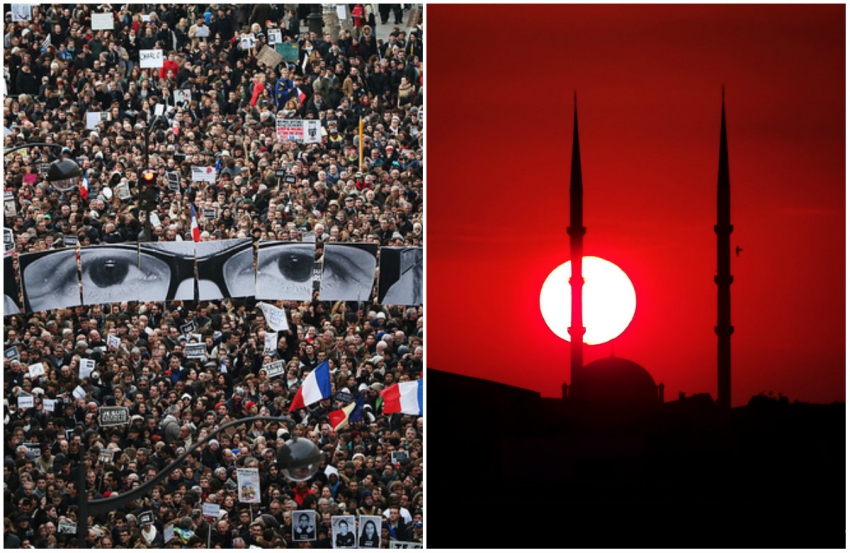 Almost two decades ago, US political scientist Samuel Huntington penned The Clash of the Civilizations and the Remaking of World Order where he argued that the West and Islam were inevitably headed towards conflict based on fundamental differences in their cultural foundations. Since 9/11,it is a position that has been adopted by Western governments and in mainstream media discourse—as well as by the very Islamic fundamentalists they oppose.

In recent days, in the wake of the killings at Charlie Hébdo, this clash of civilizations rhetoric has been ramped up once again—and once again by shrill voices on both sides. The printing of a new caricature of the Prophet Mohammed— this time wearing clothes (unlike in many of the previous Charlie cartoons where he appeared naked) and tearfully proclaiming on Charlie Hébdo's cover, "Je suis Charlie", apparently offering forgiveness to the killers (although inadvertently perhaps to Charlie staff?)— has heightened tensions to a boiling point.

While the French flocked to buy copies of the newest magazine—millions were sold, more than any previous Charlie Hébdo edition—and the image was reprinted everywhere, many in the Muslim world rushed to the streets to protest yet another blaspheme and insult to an entire civilization and religion. At the time of writing, in several regions around the world, these demonstrations are intensifying.

I am in Istanbul at the moment, where there is a cold wind blowing, and not just because it is winter. As with much of Europe there is a political—and, let's be honest, racial—chill in the air here and people are uneasy.

Istanbul's residents seem to relish their city's liminality, at once embracing the wonders of antiquity and the confusion of postmodernity, while literally and figuratively walking the line between East and West.

A popular Turkish daily named Cumhuriyet moved to reprint the Charlie Hebdo cartoons here, which itself speaks volumes to the breadth of opinion among Istanbul's populace. This prompted a police raid on the newspaper's headquarters and subsequent popular protests in defense of freedom of expression. These added to previous displays of public support in Istanbul for the French in the wake of the Paris killings.

But in Istanbul's way, and like in many other countries, the city also saw protests against the second printing. In other parts of the Islamic world, reaction has been more starkly divergent—though it might surprise people that there is divergence in the first place, given the uni-dimensional representation of Muslims in the West. After the atrocities in Paris, there were initially pro-freedom-of-expression displays of solidarity in several Muslim nations. But now, much of this has dissolved in the wake of the new image of the Prophet splashed on Charlie's cover.