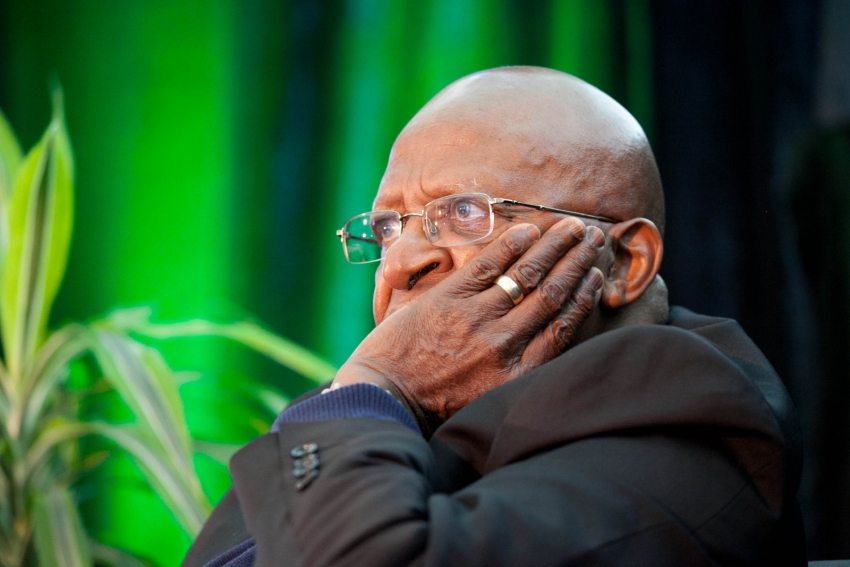 Desmond Tutu is not one to shy away from a cause he believes in.

This past week the South African Archbishop  – for years the spiritual leader of the anti-apartheid movement – weighed in on climate change and its link to human rights, just as the United Nations climate summit took place in New York.

Climate change, said Tutu, has "emerged as the human rights challenge of our time," with the worst consequences of a warming planet "being visited on the world's poor."

The survival of many who call the African continent home, Tutu points out, is tied directly to the state of the environment. When he speaks of climate change, and the problems it brings, the spectre of human suffering is at the forefront of his argument.

Tutu calls for the same strategies that were so effective in the struggle against the previous authoritarian apparatus of his homeland, which was responsible for upholding apartheid. He demands sanctions and boycotts against polluters. He wants broad-based collective action in what he believes is a moral movement opposing unethical corporations whose impetus towards profit outweighs all other concerns, including the unfolding ecological crisis.

He points out that the world witnessed similarly greed-driven behaviour during the apartheid era, when corporate interests buttressed the South African government despite knowledge of the atrocities and injustice being perpetrated by the racist regime.

Global action by ordinary citizens at that time eventually helped create the conditions which led to the dismantling of the apartheid system and the transition to democracy. Tutu suggests the same mechanisms can force transformation on climate change.

Tutu is not the first to articulate the link between human rights and climate change, but given his legacy as an effective champion of the oppressed, his voice carries a great deal of legitimacy and resonance.

The comments came as over one hundred heads of state converged on the UN headquarters for the climate summit. The summit was foreshadowed by the People's Climate March, which saw over 400,000 marching in New York and hundreds of thousands more in cities around the world, making it the largest  climate change protest in history.

Disconcertingly,  however, the leaders from three of the four top carbon dioxide emitting nations –China, India, and Russia – were not in attendance at the meeting. Canadian Prime Minister Stephen Harper also chose not to attend, despite the fact that Canada is one of the world's top per capita emitters.

Meanwhile, the Intergovernmental Panel on Climate Change (IPCC) has been releasing reports over the past twelve months as part of its Fifth Assessment, a wide-ranging evaluation of the state of the climate and the attendant issues related to it, produced by thousands of leading scientists around the world. The first three of four Working Group publications are now circulating, with the final one scheduled to be released this fall.

The science behind these reports has been subjected to rigorous appraisal, and the findings are robust.

The conclusions, on the other hand, are bleak.

Echoing Tutu's contentions, the IPCC scientists conclude that those most vulnerable to climate change impacts are the poor, who have the least access to adaptation strategies and technologies while being most reliant on the natural world for their survival and livelihood.

Paradoxically, they are the smallest contributors to the problem. The injustice is glaring.

When it comes to climate change, the poorest on the planet are entwined in a complex cause-effect web. Take food and water insecurity, both worsening in least-developed regions of the planet. Such scarcity leads inexorably to political instability and violence, which in turn further inhibits the adoption of adaptive measures at the local level. It is difficult to plant crops when one's village has been razed. Conflict also saps already fragile political structures, inhibiting allocation of resources in a manner aimed at prioritizing climate change mitigation.

The IPCC predictions are backed up in a study by leading scientists from Princeton and Berkeley, published in the prestigious journal Science, which found that climate change would likely increase violence in much of the tropical world, exacerbating an already precarious situation for many inhabitants and rolling back development gains made in past decades.

Yet we continue to move in exactly the opposite direction. Research appearing in Nature Geoscience estimated that emissions actually rose 2.5% in 2013, pushing us far beyond targets which require cuts in the amount of carbon dioxide expelled into the atmosphere.

Rich countries like Canada, the US, Germany, and Australia, remain disproportionately high emitters on a per person basis, yet are not anticipated to endure the same severity of impacts as the climate changes, and moreover have far greater capacity to mitigate these impacts when they do occur.

As Tutu passionately asserts, the imperative to act is a moral one. And it must start with the rich countries. Long before the rise of China and India, it was us in the west whose contribution to the problem was the most substantial. Proportionately, it still is.

Our government lost its moral bearing a long time ago. But perhaps that does not matter. If we agree with Desmond Tutu, then the onus is on us, the general public, to push governments and corporations to act. As with so many social problems, leadership for change is rarely initiated in the corridors of power.

Tutu's strategy worked in South Africa. We need to make it happen again.