Closing the Kitsilano Coast Guard station in 2013, and the communications network it was part of, set the course towards disaster. Now, it's finally happened. 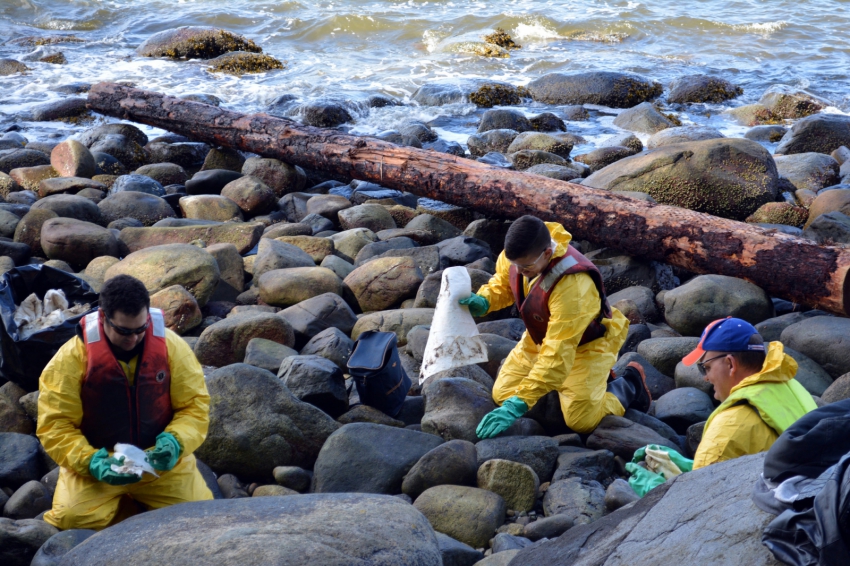 It takes years to create a crisis.

It takes careful planning, thoughtful analysis and dogged persistence. It takes having a clear vision of the future, and how you want to see that future unfold.

It also takes the ability to bravely tune out unnecessary and extraneous factors – elements in the world that get in the way of pursuing your goal.

Stephen Harper and his government have shown that they have the capacity to create a crisis as well as anyone else in the world.

When, at 5 p.m. on Wednesday, April 8, the grain ship Marathassa accidentally released a minimum of 2800 litres of bunker fuel, and a delay of five hours ensued before an official response to on-the-scene boaters, the crisis was already over three years old.

Readers may have forgotten that on Feb. 19, 2013, the order went out from the prime minister’s Office to immediately shut down the Kitsilano Coast Guard station. Staff received the order to close on that day, and within hours, received orders to move on to other work.

When it closed, the Kitsilano station was the busiest station on the BC coast, handling 300 calls a year, 50 calls more than the Sea Island station in Richmond. Its staff of 12 trained personnel had the capacity to respond within 10 minutes to any ocean-related emergency.

But plans for the closure had already been established over a year before that. In May 2012, the federal government announced that, as part of its draconian cuts in staffing at the Department of Fisheries and Oceans, it was going to shut down the Kitsilano Coast Guard station, ironically just two days before the station was due to launch Safe Boating Week.

Included in the cuts were key parts of the Coast Guard communications network, which allowed for efficient handling of incoming reports.

The protests in 2012 were immediate and vocal.

The Conservative government leaped into the fray, furiously defending the closure. Public Works Minister Rona Ambrose even blamed it on the Coast Guard itself: “Well, my understanding is that was a decision that was made some time ago and everyone in the region was aware of it, and of course this was on the advice of the Coast Guard.”

North Vancouver Conservative MP Andrew Saxton invoked invisible and unknown expertise, saying “This was a decision that was made over a long period of time, by experts…” (No one is now quite sure who those experts were or are - or if they ever existed.)

As the time for the actual closure approached, protest became more intense. Dave Clark, a vice-president of the Union of Canadian Transportation Employees, was among a group of union leaders who actually locked themselves in the station in September 2012, saying: “We've tried the reasonable, we've tried to give them explanations as to why they're wrong. It's obvious they're not listening…”

But throughout the entire debate about the closure, especially when it finally closed, concerns were focused on the saving of human lives, not a possible environmental disaster. Union leader Jim Sinclair stated dramatically, the day after the closure: “Our message is that this station will reopen. People will die if it doesn’t.” The debate has been successfully steered away from the vulnerability of the ecosystem. In order to placate its critics, the Harper government agreed to set up a seasonal three-person rescue station in Stanley Park, staffed by one manager and two part-time students. It was to run from May until September each year. Most observers considered this a laughable compromise.

When the oil leak began, a sailboat operater, who spoke at length on CBC Radio's April 10th Almanac program, saw and smelled the spreading slick, and attempted to call someone -- anyone -- in a position of responsibility to report the evolving disaster. The slick was, at that stage, less than 500 metres across. He made call after call, while circling the Marathassa, but to no avail. The only contact person for the Coast Guard was far removed from the scene, and couldn't grasp the urgency of the situation.

Today, with oil in the water, and sea life harmed, there is finger-pointing in all directions.

However, one thing is critically clear. Despite empty rhetoric from Premier Christy Clark about the province taking over ocean disaster management, the hard fact is that the federal government has, and always has had, sole jurisdiction over the oceans off Canada’s coast.

Penny Ballem, Vancouver’s City Manager, was blunt and explicit when she said, on Thursday, April 9: “We have a very clear role. We have no responsibility. We have no resources for cleanup. That’s their jurisdiction.”

This "crisis", over three years in the making, has finally come to fruition. The single-minded pursuit of a narrow, ideologically-driven form of “fiscal responsibility” has finally met up with an inescapable reality. The ecosystem around us is our life support system. It needs protection, not just lip service.

The ecosystem is also the basis of our economy.

Yes, Stephen Harper’s father was for many years an accountant with Imperial Oil. And yes, the prime minister has said his father was “the most important man in my life.”

But for heaven sakes, Stephen Harper is now the prime minister of Canada. It is not appropriate to base national policy on what one learned at one's father’s knee. 19th century economic theory said that human behavior exists entirely separate from the surrounding ecosystem. 21st century economic reality says that the two are inseparable.

I think it’s time for us to update the database on which Canada’s government is operating. And if that isn’t possible, and the Prime Minister has made clear that he thinks there is no reason for an update, then it’s time to change the government.