In testimony before the NEB, the Tsawout First Nation testified how tanker traffic will disrupt a project to revitalize traditional fishing methods. 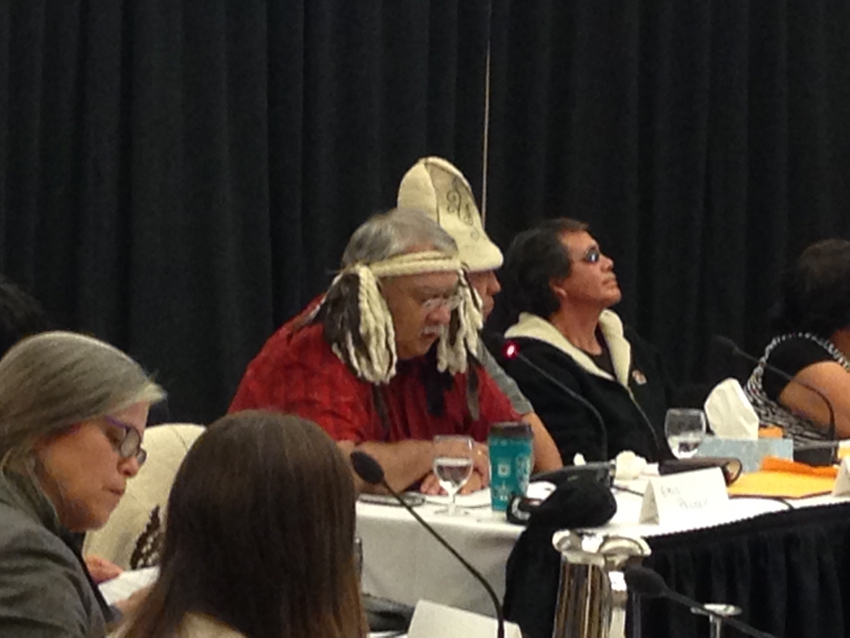 Tsawout First Nation elders testified to the NEB panel that tanker traffic from the twinning of the Trans Mountain pipeline will violate their right to “fish as formerly” under by the Douglas Treaty. It would also violate Section 35 of the constitution, and international law and destroy the First Nation’s ongoing project to revitalize traditional fishing methods.

The Tsawout were known as “the salt water people,” in part due to their unique practice of reef net fishing. They set up nets anchored to the bottom and fixed to canoes in special sites that had the right combination of underwater topography, tidal currents and salmon runs. The method of fishing was taught to them by a young man, a salmon incarnate, who married a Tsawout princess and lived in their village until the couple returned to the sea. Nick Claxton, who holds a Master’s degree in Indigenous Governance, is working a doctoral dissertation on revitalizing reef net fishing at University of Victoria.  All of the traditional reef net sites are adjacent to the tanker route.

Nick Claxton invited the NEB panel to go back in time to when the Douglas treaty was proposed. The Tsawout understood that it included their houses, the land, the fishing location, the fresh water supplies, and all the things that went along with a life on the islands, such as deer hunting, medicine gathering and hunting birds. It specifically guarantees the right “to fish as formerly.” “All would be protected, we were told,” according to Nick. “We didn’t see a threat. Rather, we saw a promise…. Even just increased tanker traffic will affect our ability to get out there and to fish as formerly.”

Aaron Sam presented testimony that he has gone out on the water nearly every day for the last forty years to provide sea food to elders in ten villages. He lives as he was taught by his father and grandfather. Now, he is teaching his twelve grandchildren the same practices. “Where your guys’ freight line is, I’m out there on both sides of the border,” he said. “You guys are taking all my treaty rights away from me.”

Eric Pelkey spoke of Tumbo Island, a small island off of Saturna, which is particularly sacred to his people because the chief who led them into twentieth century established a learning centre there for spiritual practices. Important ancestors are buried on this and other islands. Belinda Claxton noted that, before “the men of the cloth” came, ancestors would pick a place to die and go there in their canoes. Consequently, many of the islands and islets have burial sites. Aaron Sam described watching freight wakes demolish burial grounds close to the water on Saturna and Pender Islands.

Earl Claxton Jr described taking physical action to stop people from doing things that harm the ocean, such as when work went forward on a marina at their main traditional village site in Saanichton Bay. He described how the eel grass beds is an important rearing site for the creatures they take from the sea. “The elders always said that when the tide was out the table was set,” he said. “No matter how poor you were you could still eat like a king.” If there is a spill, he noted, the eel grass will be coated with oil and no longer a good home for the creatures that live there. Mavis Underwood testified that high velocity water, such as tanker wakes, can harm and destroy the eel grass beds.

Through the testimony, David Hamilton, the NEB panel chair, nodded with sympathy, like a kindly grandfather. Phillip Davies tipped back his chair and arranged his water glasses.

Belinda Claxton gave testimony on the 13 Moons practices and medicinal plants of the Tsawout people. Her mother, the late Elsie Claxton, worked with ethno botanist Nancy Turner to preserve these cultural practices. “We used the universe as a giant clock,” Belinda Claxton said. “The tides fixed our daily activities. The moons that warned of winter storms told us to put our paddles away and stay on the land.”

The final oral historian, Mavis Underwood, was the first Aboriginal deputy director of Child and Family Services in B.C. She stated, “We would rather not be speaking to you from this position.” She urged the panel to consider the cumulative effects of settlement and industrial development on the Tsawout lands and way of life, how pipelines currently exist, ancestors have been moved, land degraded and waters violated. She noted that the Douglas Treaty rights include fresh water ecosystems because they are an important part of the salmon ecosystem.

When oral testimony concluded, David Hamilton repeated back a point or two that each person testifying had made. He assured them that they would be heard and their oral histories would be considered, along with other evidence, in making a recommendation on the Trans Mountain pipeline.

One wanted to believe in his warmth and sincerity. But it couldn’t be done, given the Tsawout’s prior experiences, its constitutional objections to the process, and the recent history of the federal government’s approval of the Northern Gateway Pipeline after similar testimony. True to their own traditions, the Tsawout leaders presented the NEB panel with gifts. Then they drummed and sang their way out of the room, giving what Mavis Underwood had described as a blessing intended for the protection of everyone in the room.