Not so sunny ways: Canada looks the other way on arms scrutiny 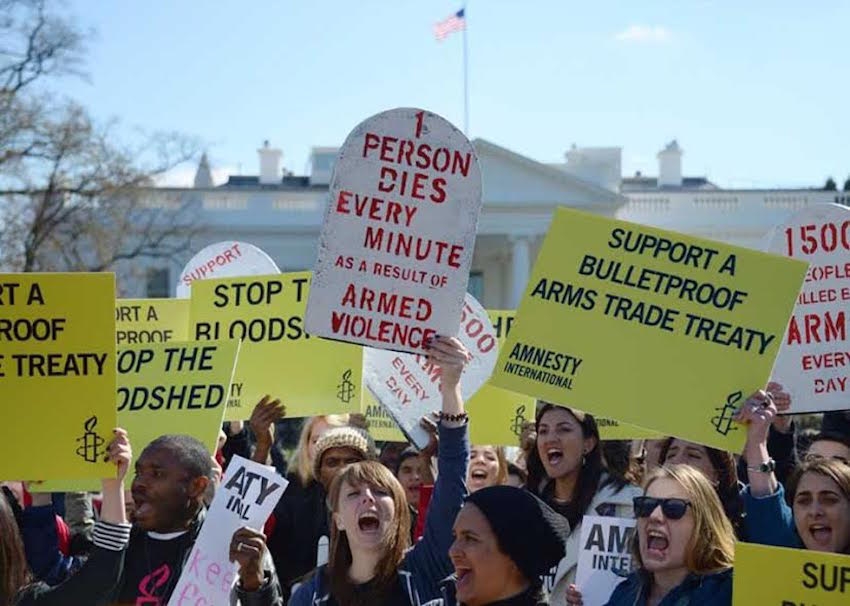 “Canada is back.” So said the new Liberal government when it took office – back to being a peace keeper nation.

During the 2015 Federal election, many social justice advocates joined the campaign to exchange the Harper government to one that would listen to the people of Canada – we thought we were in for “sunny ways,” and actual accountability for human rights.

Sadly, this week the Federal Liberal government quashed a bill put forward to form a committee to oversee arms sales to Saudi Arabia and other nations with questionable human rights records.

Unsurprisingly, the majority of Canadians are concerned about the sale of armoured vehicles to a nation that allows women to be executed for sorcery.

Earlier this year, it was painful to hear that the current government plans to proceed with the Saudi Arabia arms deal in the first place, in the face of that country’s abhorrent human rights record.

This a nation known to use torture and public beheading to control the population and stifle even peace decent and free speech. A full list of the glaring misconduct by this government can be found at the Amnesty International website.

On October 7th, 2015 in the Huffington Post, Justin Trudeau called out the Harper government, declaring "Canada needs to be once again a constructive actor on the world stage focusing on our national interests, which include security and stability in places like the Middle East... The Conservative government's refusal to sign the United Nations Arms Trade Treaty is an example of how Stephen Harper's penchant for going it alone in the world has reduced Canada's global voice."

Under the United Nations Arms Treaty which PM Trudeau said he would support, Amnesty International, alongside lawyers Professor Philippe Sands QC, Professor Andrew Clapham and Blinne Ní Ghrálaigh of Matrix Chambers, conclude in their comprehensive legal opinion that, on the basis of the information available, that selling weapons to Saudi Arabia is in fact illegal.

They have done their analysis on the basis of the UK, which is a signatory of the afore mentioned treaty.

The lawyers conclude that “any authorization by the UK of the transfer of weapons and related items to Saudi Arabia… in circumstances where such weapons are capable of being used in the conflict in Yemen, including to support its blockade of Yemeni territory, and in circumstances where their end-use is not restricted, would constitute a breach by the UK of its obligations under domestic, European and international law.”

Further, they conclude that the UK Government can properly be deemed to have "actual knowledge... of the use by Saudi Arabia of weapons, including UK-supplied weapons, in attacks directed against civilians and civilian objects, in violation of international law", since at least May 2015. If the UK has this knowledge, so does Canada.

If PM Trudeau has called out his predecessor for not signing the United Nations Arms Treaty, surely he and the current government agree with the principles outlined in it.

Under the new Liberal government, Canada has in fact signed that Treaty, which must be a sign of our moral imperative as peacekeepers not to enable Saudi Arabia to use weapons against vulnerable populations and to use our relationship to uphold and enhance human rights.

Except that the government has no plan to increase oversight of arms exports.

Because of course these arms deals create jobs, as the business case mantra goes. Canada is, after all, one of the biggest arms exporters to the Middle East.

It might be time to start thinking about what kind of jobs Canadians really wants to be promoting. There must be other industries that can provide a transition to these workers that do not cost foreign civilians their lives.

Like the new government’s foot dragging on banning export of asbestos, the cancer-causing effects of which public health officials cry to stop [7], do we really want to be exporting death to other countries?