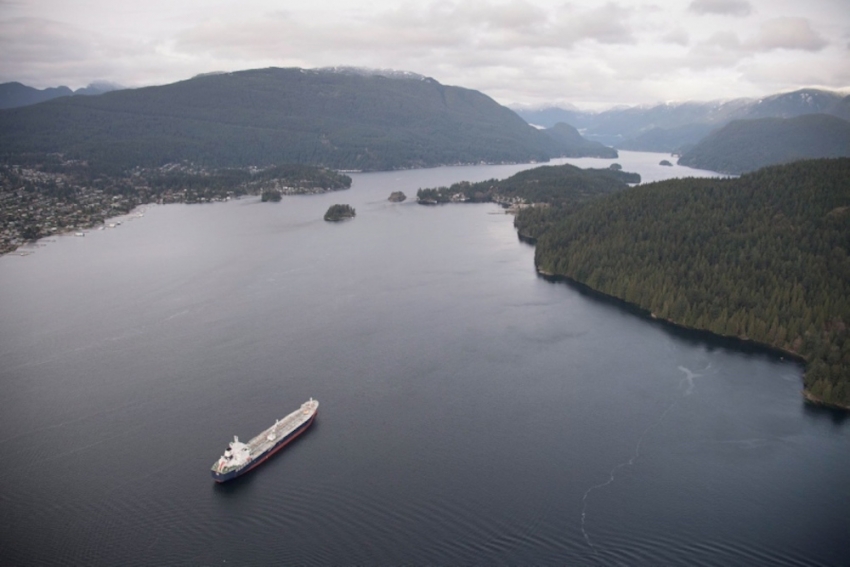 You were once opposed to Kinder Morgan’s (KM) -Transmountain Expansion (TMX), and then approved the project on January 11 2017. You stated that the five conditions for approval imposed by British Columbia were met.

The main reason you gave for the recent approval was that the last condition was met – KM is willing to share the profits (1 billion in payments over 20 years) with B.C.  But this 1 billion dollar payment could nearly pay for the extra 1.2 billion dollars TMX says it would cost to relocate the terminal to Delta Port at Robert’s Bank where the risk would be considerably less.

Do you know something that the public does not know?

All we have to go on are the estimates put forward in Kinder Morgan’s risk analysis and TERMPOL Report 3.15 to the NEB in which, in Table 34, they estimated a return period of 473 years for a major spill of 8.25 million litres, and a return period of 237 years for spills of any volume (all spills).

We equate the 8.25 million litre spill estimate to a 10 per cent probability over a 50 year operating life and 19 per cent if one considers all possible spills, of any volume. These results take into account all mitigations, including the development of a “world class” cleanup response strategy and the use of efficient tugboat assistance.

When presenting to the federal ministerial panel on Aug. 9 2016, Concerned Professional Engineers (CPE) showed that the 10 per cent risk discussed above is not acceptable.

In that presentation we compared tanker risks to other major infrastructure risks, and showed that the design of buildings for structural failure during earthquakes and collision of ships with bridges according to the S6 highways code tolerate risks that are only 1/5 and 1/20, respectively, of the risks associated with the Kinder Morgan’s expansion project.

The danger of collisions with bridges and the possibility of taking them both out of service and, in the case of the highways bridge, possibly killing a large number of people, have not been included in the risk assessment done by Kinder Morgan.  If this were done, the risks would need to be added to the already purported risk mentioned above.

CPE appreciates that B.C.’s department of transportation and infrastructure has a study, ongoing from 2015 to the spring of 2017, regarding the risks of the increased tanker traffic.  CPE believe strongly that we should know what that risk is before the project begins.

As our Premier, you have the obligation to back up your decisions and show transparency in your evaluations, particularly when they involve very large and risky projects.

What is needed in this argument of benefit vs. risk is to put numbers in dollars beside the likelihood of a catastrophic event.  One way we can see this being done properly is to ask a large risk insurance company for a properly evaluated study of risks that sets insurance premiums for unlimited liability to be required by the tanker companies coming to pick up and take away the oil.

It is easy for Kinder Morgan to talk about the sevenfold increase in tanker traffic being safe and acceptable because they carry none of the risk in tanker transits after leaving their terminal loaded or before arriving to their terminal empty.  The risks during navigation rest solely with the tanker company, whose resources are or may be limited.

Ultimately, the risks fall on the taxpayers as represented by the B.C. and federal governments to pay the costs to repair and rebuild the bridges. The present tanker risk fund of 1.3 billion dollars is extremely unlikely to cover the damages caused by ship collisions, oil spills, loss of life and loss of business. It is more likely that these costs will run in the tens of billions.

Therefore it is CPE’s request for you to work with Prime Minister Trudeau and ensure that a proper risk assessment of the bridges be done and that the risk assessment include recommendations to increase the strength of the footings of the railway bridge to limit the damage done by ship collisions.

When this is done, a proper risk-benefit assessment of the expansion can be made. Yours sincerely,