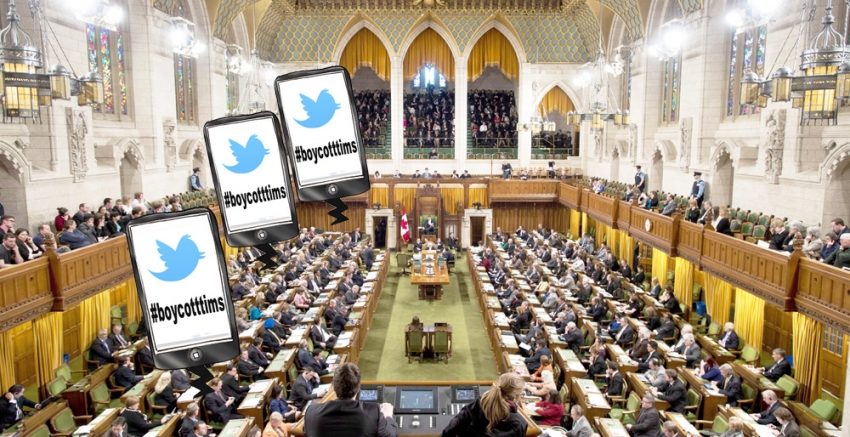 Vancouver Observer illustration
On Thursday morning, while the House of Commons was in session debating matters of national importance, three federal ministers of the Crown took to their Twitter accounts to encourage a mass public boycott of Tim Hortons for declining to host in-store Enbridge promotion.

Such is the current nature of Canada's tin-pot faux democracy, as we shape-shift by the hour into the Dominion of Enbridge.

As everybody in the country now knows, Alberta and Conservatives had a mass freakout over Tim Hortons' decision to decline screening Enbridge ads on its in-house TV screens. The news of Tim Hortons' decision was tweeted by the company at 8:10 a.m. eastern time Thursday, responding to a huge online pushback. While critics blame environmental activists, Timmys was probably more dismayed by vitriolic public response on Reddit when Enbridge itself announced the agreement several days earlier.

At 10:32, Canada’s Minister of Western Economic Diversification, Michelle Rempel, took note on Twitter. At 10:34 Taylor tweeted at Rempel, inviting her aboard the #BoycottTims hashtag, which she joined with alacrity a minute later.

Six minutes later, Taylor invited Canada’s Minister of Defence, Jason Kenney, onto the runaway train. Kenney demurred on retweeting the #BoycottTims hashtag, but replied with support for Enbridge and Taylor. But soon thereafter the estimable Pierre Poilievre, Minister of Employment and Social Development, piled on, further propelling the Timmys boycott campaign across the country.

Poilievre tweeted on the subject a full 16 times.

What’s unconfirmed is whether Poilievre, Rempel and Kenney tweeted directly from their seats in Canada's House of Commons, or were too busy to attend the 10 a.m. sitting.

All this to essentially force a coffee-and-doughnut emporium to host advertising for oil pipelines on its in-house screens — something that isn’t done by any of its competitors.

Tim Hortons employs a workforce of more than 100,000 mostly young people and immigrants working in Canada at marginal or low wages. That a boycott might throw untold numbers of the young or working poor onto the street didn't enter the apparently brainless head of our Minister of Employment and Social Development.

That it might hurt small business franchise owners or the retirement savings of millions of Canadian shareholders troubled not the unfurrowed brow of our Minister of Western Economic Diversification.

Yet perhaps the most extraordinary aspect of this bizarre episode is the dearth of media commentary condemning Canadian cabinet ministers using their positions of power to shove around anyone who fails to salute the oil sands flag.

It’s hard to know what’s worse: the Harper government’s casual abuse of power in pursuit of its goals, or that we just stand here and do nothing.