Vancouver neighbourhoods tired of towers, maybe it's time to build down?

This solves the housing affordability crisis and prepares us for catastrophic climate change.

Building down today, into a vast underground network of condos and coffee shops and community centres, might seem like we're creating a lower strata of resident. In fact, these are both a great chance to create badly needed affordable housing AND speculative investments. They can in fact be one and the same. We can solve homelessness, and if we put in place some kind of rent to own scheme we could even lift families and young professionals with several university degrees out of poverty as these underground condos become high demand commodities 30 to 50 to 100 years from now when catastrophic climate change has elevated the great outdoors into a nightmarish Medean test of the will. Yes, these underground condos with their LCD Screen Windows and climate controlled environments will go from being a silly socially inferior low-cost housing option today, to a prudent investment and even luxury housing option tomorrow. There will be bridges too. Underground bridges. 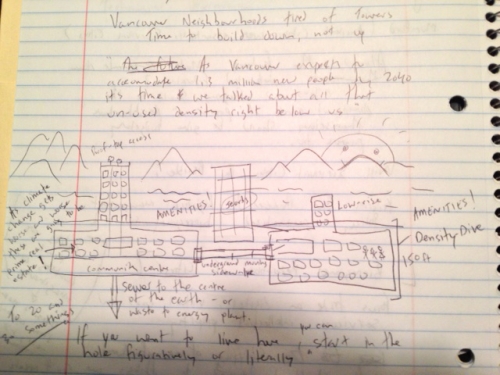 In fact, the super wealthy have already clued into this. They have increasingly been building underground mansions that even extend underneath other people's properties. Because why not? The privacy factor, no windows for the paparazzi to zoom in through, the cover of the earth above you like some kind of security blanket, I get it. Why should you rich folks have the depths of the earth all to yourself? You sneaky bastards are way ahead of the curve here. I say we liberate the depths of the earth for all us commoners.

The future of humanity lies underground

Here's a few examples of this concept at work.

Hacienda de la Paz is the name of a mansion in southern California that went on the market for fifty three million dollars.

Canadian David Graham has plans to build a mansion which is predominantly underground right in the middle of a crowded urban neighbourhood in London, England. I strongly encourage you to check out the designs here as they give you an idea of what may, or may not, be feasible in the Vancouver context. Fittingly enough, residents in that neighbourhood were every bit as outraged as residents in Vancouver's several neighbourhoods have been as of late.

It's not just single homes that are being considered for underground construction, an entire block of Mexico City has been proposed to be built down in an inverse pyramid or earthscraper.

To quote the article about the Mexico City proposal in Gizmag linked above:

This ambitious "Earthscraper" concept from BNKR Aquitectura seeks to address several problems faced by Mexico City - a growing population, the lack of new plots for construction, the need to conserve historic buildings and height restrictions on new structures. "The historic center of Mexico City is in desperate need for a pragmatic make-over," says BNKR. The solution - build an inverted pyramid underneath the main plaza at the heart of the city.

Does any of that sound familiar? With the exception of the inverted pyramid at the heart of the city part...

For the first half of this article I think it was clear that I was being facetious but I hope I've illustrated a couple of things worth considering. Luxury condo investment aside, people will continue to move to Vancouver, and we will need to build places for them to live. We are running out of surface area as we are surrounded by water, agricultural lands, parks and other municipalities. If we don't want those places to be above ground in our communities, then what are our options? They move elsewhere? We adopt other forms of density? Does this include underground density?

If building up around transit hubs is unacceptable to many of us, is building down a bridge too far?

Please, I encourage you to suggest any potential technical terms that we urbanists can bandy about in the future in the comments section.