Education Minister Rob Fleming announced Thursday that Vancouver voters will get a chance to elect new school trustees. The new board will serve for a year until the regularly scheduled elections are held in October 2018. 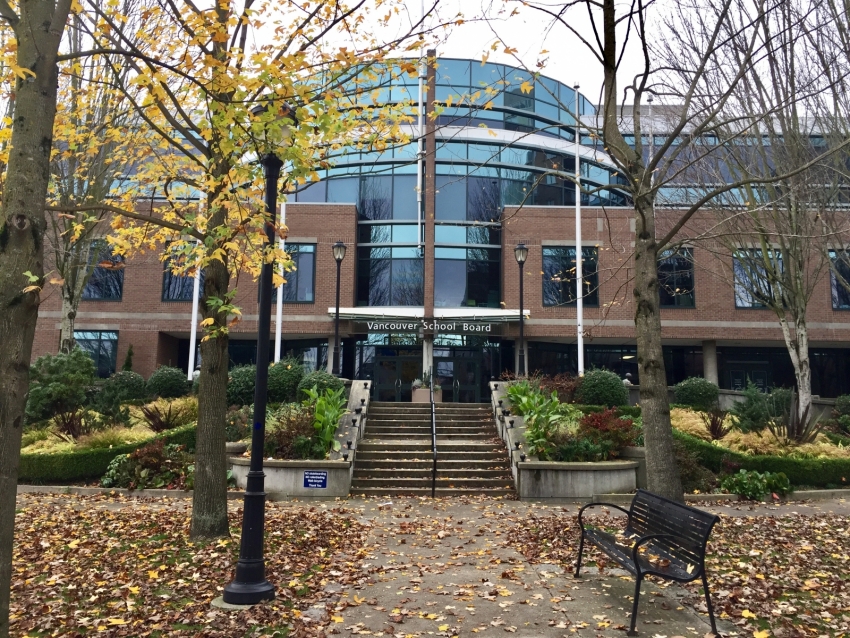 The Vancouver School Board's elected trustees were fired in October 2016. Voters will go to the polls October 14, 2017 in a by-election to replace them. Photo: Patti Bacchus

They'll go to the polls in a by-election to choose a city councillor to replace Geoff Meggs, who resigned his seat to become Premier John Horgan’s Chief of Staff.

That’s great news. The nine elected Vancouver school trustees voters chose in the 2014 election, including me, were fired by the B.C. Liberal government last October for refusing to approve a budget with deep cuts to staffing and programs. The by-election falls almost an exact year after the firing and a year before general school board elections will be held again in 2018.

Shortly after we were fired, John Horgan joined us at a rally at the Vancouver School Board (VSB) and pledged to reinstate the fired trustees if he was elected. He shifted to promising to call a by-election after that.

The biggest drawback to by-elections is the cost, but since the city will already be holding an election to fill Meggs’ seat on city council, the cost for the school board is much less than it would have been it they had to foot the whole bill.

Fleming told reporters Thursday during a conference call Thursday that the VSB will pay a “cost-recovery” fee for its portion of the by-election that will be run in conjunction with the one for the city council seat. The by-election's total cost is expected to be over a million dollars.

It’s good to see the new minister act quickly on this file and send a strong message about the importance of elected, accountable local governance.

What surprised me, however, was his announcement that the B.C. Liberal government’s appointed trustee, Dianne Turner, will be kept on to advise the new board.

Turner is a former high school principal who is on secondment from the Delta School Board where she was its Superintendent of Schools. The VSB has been footing the bill for her total compensation package, which is close to $300,000 a year — more than the all the elected trustees were paid combined.

I’m not aware if Turner has training or expertise in board governance — that’s a very different role than as a senior education administrator. She hasn’t made any governance changes in the almost ten months she’s been on the job.

Since she’s been in her post as official trustee, she closed the Main Street adult education centre (located at Gladstone Secondary), despite the new government’s commitment to restore funding for its programs and cut elementary French immersion spaces despite growing demand for them.

Turner approved a 2017/18 operating budget that will be balanced by using funds allocated by the previous government to pay for new teachers districts need to hire to comply with the Supreme Court of Canada ruling in B.C. Teachers’ Federation case.

However, Turner’s plan to use the funds — called “classroom enhancement funds” (CEF) by government —  to balance the budget and pay teachers who were already on the payroll may or may not be permitted and doesn’t appear to comply with the spending rules for the CEF.

He didn’t have an answer for me but if he is determined to keep Turner on despite her record so far, his government needs to pay her compensation package, which is more than ten times as much as each elected trustee makes. That money shouldn't come out of the VSB's operating budget, which is already stretched too thin.

No, I’m not running

I ran for school board three times — in 2008, 2011 and 2014 and was its longest serving chair ever. I used to joke that being the VSB chair should be counted in dog years — each year felt like seven, especially when one was dealing with the B.C. Liberals. I’m not surprised no one else has ever held the post as long — it’s exhausting.