The VSB’s budget plan includes questionable plans for the BCTF-settlement funds, a controversial online survey and closing all but one adult education site 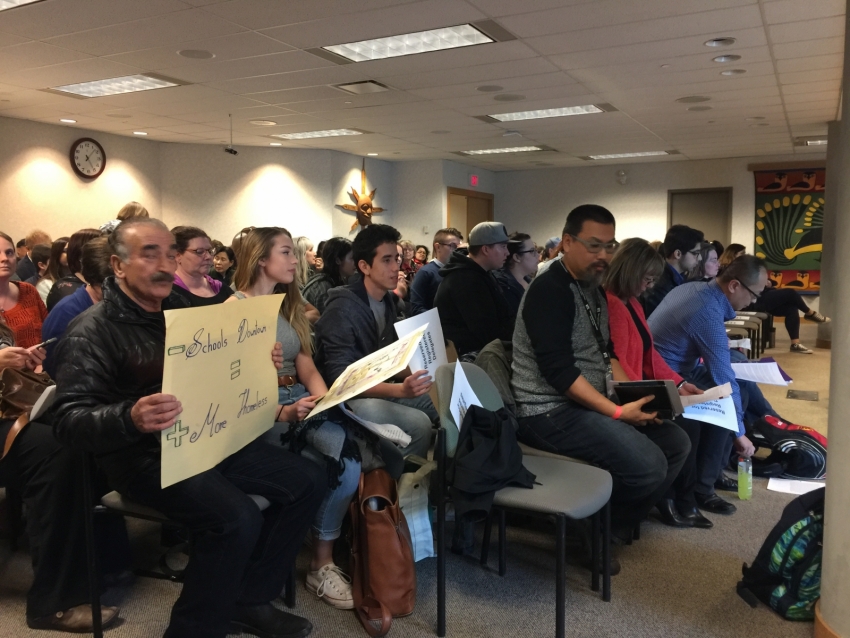 Feedback on the Vancouver School Board’s (VSB) 2017/18 budget proposals at meetings this week called for a focus on advocating for education funding, scrapping a controversial online survey that parents called “ugly and divisive,” keeping adult education centres open and not cutting career advisors.

Many current and former Gathering Place and Main Street (now located at Gladstone) students spoke eloquently and passionately at Tuesday’s budget meeting in support of keeping the centres open.

Some spoke of their challenges with poverty stemming from mental health problems. Some were recovering from addictions and said they were excelling in courses at the Gathering Place but wouldn’t be able to afford monthly bus passes to get to the South Hill site, which would be the only one left if the board’s government-appointed trustee approves the proposed cut when she votes on April 26.

Bunny Wilder, a single parent with a disability, told the trustee she often felt hopeless about her future until she enrolled in adult education, where she discovered she felt welcomed and valued. Now an “A” student, she hopes to go into social work or counseling, but says she won’t be able to commute to South Hill because of the cost, as she’s dealing with poverty as the result of mental illness. “We need services in our neighbourhoods,” she said, echoing similar comments from several speakers.

Some asked why senior VSB managers were “lining their pockets” with raises while recommending closing programs needed by people living in poverty who are trying to get an education so they can get better jobs. Speaker Janelle Sims, 39, who identified herself as from the Nisga’a nation of the Nass Valley, said the Main Street Centre (at Gladstone) is a safety net and that what is being called a budget cut is “cutting peoples’ hope and dreams” with many hidden costs to society.

As a former trustee and the VSB’s longest-serving board chair, I presented my own submission and asked for: clarity regarding the use of the provincial classroom enhancement fund, keeping  adult education centres open, removal of the controversial online survey, leaving the decision to rejoin the BCSTA for an elected board to make, and most important of all – advocacy for increased funding.

I challenged Dianne Turner, the appointed trustee, to do as we did last year — to vote “no” to more cuts — and send a strong message to the provincial parties that public school funding needs to be increased. I also urged her to visit the adult education centres on her chopping block before deciding their fate.

Vancouver city council passed a motion unanimously Tuesday urging the appointed VSB trustee to reconsider the proposal to close two of three remaining adult education centres. The motion, brought forward by Councilor Andrea Reimer, a former VSB trustee, noted “Site closures invariably lead to a loss of enrolment, a lesson learned from program cuts over the years. Many adult education students juggle family and employment responsibilities, or live in extreme poverty, and are unable to afford the time or money to travel longer distances to take courses.”

The “vile, ugly and divisive survey”

There were many complaints about the VSB’s online budget survey, which the board says will “be the primary method used to gather input” on its proposed budget.