Why we shouldn't stop at pot 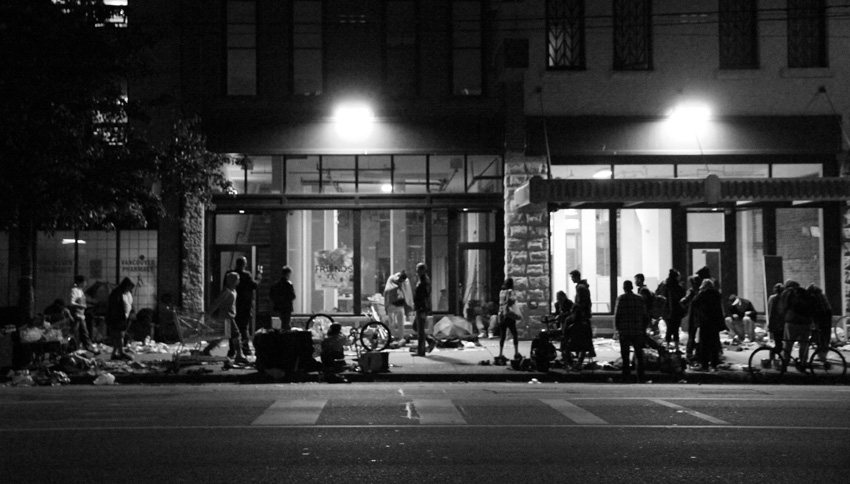 Does our democracy represent all of its citizens? (Vancouver's downtown eastside, credit: Alistair Mellen)

Just over a week ago, as the Justin Trudeau-led Liberal Party swept into power on October 19, social media erupted with stoner jokes about pot and the new prime minister.

At the top of many Canadian’s minds — business owners, activists and academics — was Trudeau’s longstanding plan to legalize marijuana use.

Unsurprisingly, such wide-reaching reform has sparked both optimism and skepticism, but Trudeau's campaigning on the principles of public representation and evidence-based politics ought to inspire us toward political literacy, by grasping the implications of our nation’s policies.

The fact that news media regularly sources Twitter, and that Prime Minister-elects respond to Facebook posts, is evidence of the growing weight of easily-accessible public opinion.

Under the leadership of Stephen Harper, our country saw a crusade that greatly expanded the war on drugs. Despite calls to legalize marijuana from the Centre for Addiction and Mental Health (CAMH), Canada’s largest health authority, and to decriminalize recreational use of all narcotics from the World Health Organization (WHO), Canada’s outgoing regime planned to increase enforcement.

Mired by nearly a century of fear-mongering, social programs and research have stagnated at the hands of draconian politicking. After years of promised solutions, Vancouver’s 1,700 homeless remain displaced while hundreds of millions of tax dollars are spent cracking down on narcotics.

Canada now has the unique opportunity to be a world leader as the first major country to fully legalize a controlled substance in the post-Henry J. Ansligner prohibition paradigm, but we’re not there yet, and we must go further still.

Canadian anti-drug legislation started off discriminatory, became obstinate, then evolved into a tyrannical beast conjuring its own war and fighting it with wild, directionless rage. Our current policies resemble early 20th century contempt for immigrants, 50 years of ignoring recommendations from government institutions, and a misplaced fervor for strict policing — a far cry from the evidence-based, empathetic approach required to diminish the barriers facing drug addicts and potential drug addicts.