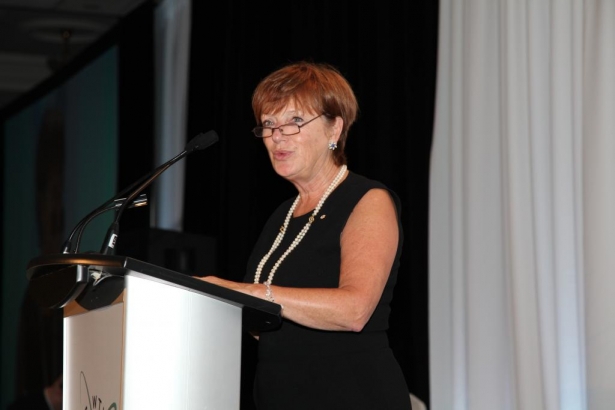 When asked if she always wanted to be in business, the founder and former president of Body Shop Canada, Margot Franssen laughs and says no. She was a party girl in high school, she says,and after graduation took a job as a secretary.

“I worked in an investment firm and saw all these young men going through the training program to become stock brokers and I thought, I can do that. So I went to my  boss and said,  I’m really interested in doing this and I know you’re having all these young men coming through. You’re paying them to do it. I’d like to be given a chance."

The reply from her supervisors at the time—in 1971—was that they didn't pay to put women through the program. Their reasoning? It was unlikely she'd pass.

“I was just flabbergasted.  I had been brought up to believe I could do anything that I wanted."

She left the firm, got a new job in a personnel department and there came up against another double standard. She was responsible for interviewing potential employees.

“The questions I had to ask women were  appalling, and they were all legal,” she said.

“It was like, what kind of birth control are you on? How’s your marriage? How many children are you planning on having and how will you take care of them? It was invasive questioning, and I couldn’t stand it.”

Franssen again left her job and finally found another firm that would pay for her to take the stockbroker course. To her male colleagues’ surprise, she aced the test while they barely got by. But even with her certification, when she asked to start trading, she was told no.

Discouraged by this chain of events, Franssen decided to go to university and study business and eventually switched her major to philosophy. It was then she began working for feminist artist Maryon Kantaroff, who she says provided the inspiration for her focus on women’s issues.

“I had this dual education—in the daytime at school I was learning about truth and dignity and analytical skills and history, and when I was working with her I was learning exactly the same thing but with a gender lens attached to everything. It was an amazing education in the world of women,” said Franssen.

When she graduated, Kantaroff gave her a gift basket from a new British bath and body store called the Body Shop.

“I opened up the basket, and there were the ugliest bottles containing the nicest product,” she recalled.

“I had never seen anything like that before. So I flew to England.”

With only six locations open at the time, the company was still very much in its youth. But after seeing a few of the stores, Franssen had made up her mind—this was a revolutionary corporate culture that she wanted to be a part of. She set up a meeting with the owners, and by 2 a.m. after a few drinks, they shook hands and agreed that she would bring the Body Shop vision to Canada.

Before long, Body Shop Canada took off. The company’s U.K.-based founder Anita Roddick gave Franssen the freedom to explore her own vision with the Canadian store, and what she did with it captured the attention of women across the country.

“The company was 95 per cent women, and our customers were about 99 per cent women. So it was a very female-oriented business,” explained Franssen.

The campaign against violence

The Body Shop had always been dedicated to environmental activism, at a time when it was not as visible on the public agenda. But in Canada, Franssen engaged consumers on a whole new range of issues.

“In many respects the Canadian end of it led the way for many of the campaigns, especially ‘Stop Violence Against Women’, which was ours,” she said.

Franssen’s groundbreaking campaign against violence began in 1994, and by the end of that year had already raised $155,000 to support prevention and recovery programs. She says she started thinking about it after a previous campaign they had done around child poverty in Canada.

“It made me start to think, why are there poor children in Canada? And of course, the answer is so simple—it’s because their mothers are so poor,” she said.

“And I started looking at the reasons that mothers were poor, and many of the reasons were because they were locked into relationships that were violent or emotionally draining, or just chipped away at women. And if they wanted to leave that relationship, they left with nothing.”