David Vogt on technology and the future of humanity 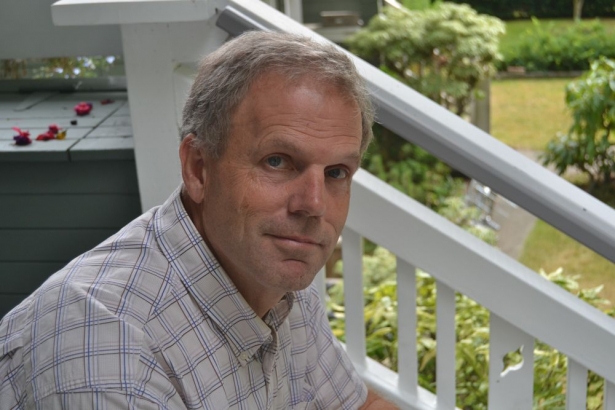 David Vogt at his Vancouver home. Photo by Linda Solomon.

One starry evening years ago, a young David Vogt and a group of people stood out on deck of the UBC Observatory gazing at the constellations. While Vogt was pointing out the different stars, a bright meteor suddenly blazed across the sky, leaving an effervescent trail of light.

Before their eyes, the meteor broke off into two pieces. A fraction of a second later, it then broke into another two, so that four glowing balls of light, travelled briefly together before disappearing into the darkness.

"My scientific head says its a meteor that just broke in two,"  Vogt said, and he pointed this out to the small, awestruck crowd.  "But, you could also say that was a fleet of alien spacecraft that just travelled across the sky and they just travelled in formation. It  engendered a conversation about what you can believe with your eyes, and not to believe the conventional scientific explanation."

Today, the Vancouver-based scientist, storyteller and innovator continues to ponder the possibilities of the unknown, both in outer and digital space.

"My original career was as an astronomer, so I have to think of myself as a cosmic thinker," Vogt said, seated in his sun-splashed kitchen one August morning.

His varied career reflects his big-picture thinking. Starting as a professional astronomer and observatory director, he became a science museum director, then a dot.com CEO, and now an innovation strategy director at UBC's Media and Graphics Interdisciplinary Centre (MAGIC) Lab.

After serving as director of the UBC Observatory for 12 years, Vogt's wish to involve people more in science led him to a three-year stint as science director of Science World from 1993 to 1996. There, he introduced an award-winning interactive science program for schools called Science Brainium, as well as a program called Science and Innovators in Schools, which put scientists out of their laboratories and into classrooms.

“I put my telescope on my back went all around BC. I visited classrooms and communities, First Nations and otherwise,” Vogt recalled.
As part of the program, First Nations elders and teachers went on a wilderness camping trip with scientists for several weeks. They shared stories around campfires and discussed how to enrich science lessons in classrooms.

In recent years, Vogt has turned his attention to a new vast world of the unknown: technology as innovation strategy director at the MAGIC Lab at UBC. The lab fosters research in media technology which aims to support economic development in BC.

Vogt's sky-blue eyes light up as he explains how his work helps seemingly unrelated organizations to collaborate and innovate.

“I enjoy creating relationships between organizations that don't always work for mutual benefit,” he said.

“It's kind of a stone soup approach where everybody puts in a few things, and all the sudden you put in a healthy broth because of it."

A few examples of this include “Get Your Vote On”, which makes voting fun and worthwhile for youth who are eligible to vote, but don't usually make it out to polls. The initiative helped bring a staggering 172 percent increase in youth voter registration in the 2005 provincial election (and the first increase in youth voter turnout since the 1970s).

Another example is the MAGIC Lab's collaboration with Mobile Muse and the Pacfiic Parklands Foundation in 2011 to help people engage in "friending mother nature” through acts of random citizenship: cleaning a stream, for example, can be instantly broadcast on Facebook, leading to points that can be transferred into science credits in schools, or to score free goods and services from sponsors.

It's a good way to involve youth, and to inform them that they have a role to play in the world at large.

“My own humble opinion being the parent of four children is that  the 'failure to launch problem' isn't so much about how expensive it is for them to leave home, as it is that the last generation of parents over-programing and over-coordinating for them so that they don't need to do anything,” he said.

“They have this sense that they can be inert because nobody wants them to do anything...I think it's time for society to turn around to earlier recognition that everybody has an essential role and its broader than going to the supermarket and commuting back and forth to work."

NASA: it rained so hard the oceans fell