This is the first in the series about the campaigns of  BC Liberals running for premier. 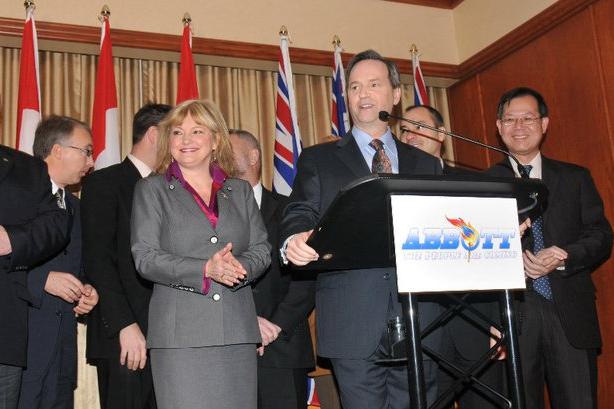 Abbott at a press conference in January. Photo: Diamond Isinger

Papers are strewn over desks, drinks and candy dumped into corners, and a conglomeration of dates and places are scrawled on the lone board on the wall. In a poorly-lit corner sits a young man in a T-shirt, no older than 25, tapping away at a computer.

But this is no college dorm room. This is Chris Sandve’s office, the tiny room in which every facet of Liberal frontrunner George Abbott’s entire 93-day field campaign is coordinated.

“Over half of our core team are youth,” says Mark Masongsong, Abbott’s former executive assistant in the Ministry of Health and close advisor, himself only 29. “The bulk of the work here, and not just the grunt work, is done by people in their twenties.”

Indeed, today, everyone at George Abbott headquarters on West Hastings, reporter included, was clearly under the age of thirty.

“Young people get to prove themselves in roles they didn’t expect,” adds Diamond Isinger, the campaign’s social media guru. “We develop trust with each other. We’re in it all for the same goal -- to get George elected.”

So how exactly is this goal achieved? The first question of the day already elicits some unexpected non-responses.

“What’s your job title here?” I ask. “I need to know what to call you in the article.”

Diamond and Mark look at each other, smile, then turn back to me.

“We didn’t really give ourselves job titles,” Masongsong says with a note of hesitancy. “That’s just not the way we do things around here. People take on roles. One day, someone can walk into the office and [s/]he can be the director of technology.”

“If we had defined roles, it wouldn’t have worked,” Isinger agrees. “That trust, that’s why I feel we have the best [intra-team] interactions of any Liberal leadership campaign. Some nights, we just sit here for hours and talk.”

If there’s a single word that pops up again and again in our conversation, it’s that word “trust.” Many would believe that the young guys would only be trusted to handle the paper-pushing, the messages on the phone, or sending out flyers. At Abbott HQ, it becomes abundantly clear that that’s not the case.

“If there’s a man who will take a nineteen-year-old as seriously as a CEO, it’s George Abbott,” Masongsong says. “People don’t think youth run things. As part of the original seven [advisors on the Abbott team], there was no second look. I’m not operating with a safety net. I had an opinion, and the next thing I know, the campaign is running with it.”

Some serious trust, it seems, is placed on a group of folks looking like they’re barely out of school.

But major policy planks and high-level advisors are not all that youth have contributed to the George Abbott campaign. Young people are really what gave Abbott the momentum to become a favourite in Saturday’s vote, propelling him out of the blueberry farm and into Victoria newsrooms.

Abbott, shortly after announcing his candidacy, got the endorsements of four out of five of the B.C. Young Liberal executives. Later, BCYL President Donny van Dyk, by office forced to remain neutral, resigned his position to endorse Abbott.

"George wasn't a frontrunner when the campaign began," says Masongsong, "but young people got him there. It was only natural to build the team around [them]."

Good thing Abbott did, perhaps, as the three-month long campaign needs a sort of energy that few can sustain. A day at work? “Waking up at 4 am in Penticton, a flight down to Vancouver, then back up to Quesnel, Williams Lake, 108 Mile House, and then Kamloops at 1 am in the morning,” Masongsong recalls, out of breath by the end of the sentence.

But George Abbott’s young guns can handle it. They’re used to the long days, messy desks, and heaps of work that have come to characterize the pressure cooker of campaign season.

They’ve also got a close enough dynamic, a trust irrespective of age, to crack open a couple beers at the end of the day and talk -- sometimes about politics, sometimes not -- until the sun saunters over the mountains and filters into the windows of Abbott HQ’s 17th-floor office.

Which candidate for premier best represents BC citizens on climate?

It's Our Party, You Can Cry If You Want To, Liberals Tell VO

Did Gordon Campbell take the BC Liberals down with him when he fell?