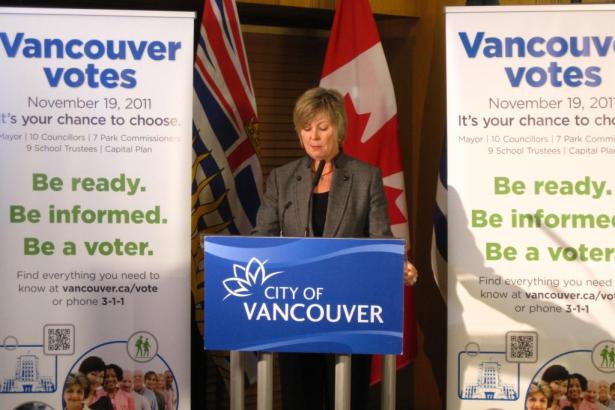 City of Vancouver chief election officer Janice MacKenzie told press that officials were working hard to improve on the discouraging 31 per cent turnout reported in 2008.

“We want to engage the voting public and increase voter participation,” she said, as she began to list off the changes being made at City Hall.

“First, we have doubled the number of advanced voting days from four to eight, so people can vote from November 9th through to the 16th. And we would like to dispel the lingering understanding that voters need a reason to vote in advance. A reason is no longer needed.”

Advanced voting will be open at five locations on November 9, 12, 15 and 16, and you can vote at any of the locations, regardless of your address.

If you can’t make it to one of those places on the dates listed, you can also vote at City Hall on the dates in between – including the weekend and Remembrance Day. As in previous elections, mail voting is also available for those who apply.

MacKenzie also noted the importance of providing convenient access to voter information, giving a brief introduction to new technologies the City is employing.

“New for this election is our iPhone app. It contains information on voter eligibility, where and when to vote, the candidate names, a tool to see if you are on the voter’s list, and a civic quiz,” she said.

These social media initiatives aim to reach the historically difficult voter demographic between the ages of 18 and 35 by making it easy and convenient to learn about the election. The “civic quiz” tests users’ city knowledge, keeping track of their answers to questions about things like city landmarks, number of seats on council, and how municipal taxes work.

This type of approach will resonate with the younger demographic, according to Adrian Sinclair, coordinator for the non-profit group Get Your Vote On.

“I have high hopes for something like that, because everything is going in the right direction,” he said.

“Another thing though, is the face-to-face, going to where youth actually are and starting conversations with people who maybe have never voted.”

According to Sinclair, one of the main reasons why youth don’t show up to vote is a continuous cycle that tends to produce apathy.

Non-partisan organizations like Get Your Vote On try to encourage engagement through events like the City Council Speed Dating Challenge and their “Vote-o Booth”, photographing voters at advanced polls and creating a discussion on social media about why youth are voting.

“There’s a social media side of it, but there’s also building relationships,” said Sinclair. “So that actually happens through lots of events and outreach.”

In terms of events, MacKenzie noted that the City will be holding community workshops targeted at new immigrants and cultural groups, meant to educate and inform people about municipal issues. In addition, she said City Hall’s 3-1-1 hotline is open for voter information available in 180 different languages.

“We are reaching out to the city’s cultural communities and community partners to engage new Canadians. We want these voters to better understand the role of local government and the importance of voting,” she said.

Some commentators have mentioned Mayor Robertson’s potential vulnerability in this election, as younger demographics typically in his favour are the ones less likely to vote. It’s hard to say whether the new push for voter engagement is an acknowledgement of this suggestion, or simply a priority regardless of partisan affiliations.

At today’s press conference, MacKenzie also made note of the capital plan borrowing questions to be included on the ballot, which will ask voters for their approval for Council to borrow $180 million for “capital projects”. The money will reportedly go towards things like bridge maintenance, affordable housing, re-paving streets and replacing traffic signals.

When asked how much these new engagement efforts were costing the municipality, MacKenzie explained that the cost of this election has exceeded last election by about $100,000. The total election budget for 2011 is $1.8 million.