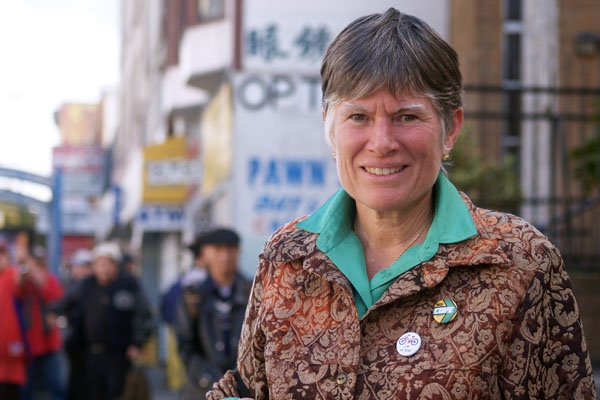 Ellen Woodsworth in the Downtown Eastside, where she organized for decades. Photo by David P. Ball

2011 Vancouver Municipal Election: “It takes knowledge to understand others, but it needs a clear mind to know oneself.”

Ellen Woodsworth, taking a break from the civic election trail in Chinatown, glances at the Lao Tzu quote painted on the building-high mural of the ancient Chinese mystical philosopher. It's one of her favourite works of public art, she says, and fittingly our conversation undulates easily between campaign issues and philosophy.

When a coffee shop is suggested, she points at a vacant curb in a Chinatown parking lot and says it will do fine for an interview – besides, she says, it's in the sun. Not the type of politician to shy away from the rougher edges of life, Woodsworth sits down on the concrete and launches immediately into an issue she has worked on for decades: affordable housing.

“Housing is a right, it shouldn't be a commodity,” she says. “We're in the greatest housing crisis since the Depression. More and more people are homeless, more and more don't have enough for rent.”

“People have to organize to fight back. What gives me hope is how neighbourhoods are active. When people don't have organization, then we lose.”

The long-time Coalition of Progressive Electors (COPE) councillor – first elected when the left-wing party swept to power in 2002 on a platform of ending homelessness -- comfortably spells off other areas she'll address if re-elected November 19: Electoral reform (she wants councillors to represent neighbourhood wards, and reveal all donations before the vote). Homelessness and gentrification (she wants a moratorium on new condominium development in the Downtown Eastside until social housing is increased). Transit. Combatting homophobia. Increased support for urban Indigenous people.

Over several interviews, Woodsworth reveals herself an interesting mix of traits. She is widely hailed among progressives as a passionate grassroots activist, but also occupies a central rung in the COPE establishment. She minces no words in criticizing the economic system, developers or election donation excesses, but is careful to respect the electoral alliance with Vision Vancouver for which she  pushed hard within her party.

In some ways she might be a political insider at City Hall, but Woodsworth is known in the community for being willing to bring her principles to the proverbial concrete curb.

“My experience is she does everything she can to support grassroots people,” says long-time community organizer and author Jean Swanson. “She's very progressive. It's a thing that exudes from Ellen -- in a fundamental way.”

Swanson laughs when I mention the curbside interview in Chinatown, with Woodsworth unconcerned with dirtying her campaign clothing.

“She dresses snazzy, but she gets right in there whether people are squatting or whatever. She used to go around the hotels and meet and talk with (residents) about their rights and how to get involved.”

In fact, it's hard to find many who will say much against Woodsworth – even her opponents express respect for her. When she announced her party's proposed ban on new condominiums last month – arguing that unregulated development leads to the displacement of low-income renters from their neighbourhoods by rising prices – she did it in front of the contentious Sequel 138 development. The former Pantages Theatre, on the struggling 100 block of Hastings near Main Street, has generated heated controversy and numerous demonstrations over the condominiums, and Woodsworth herself has joined the protests.

Is the future Green? Adriane Carr thinks so