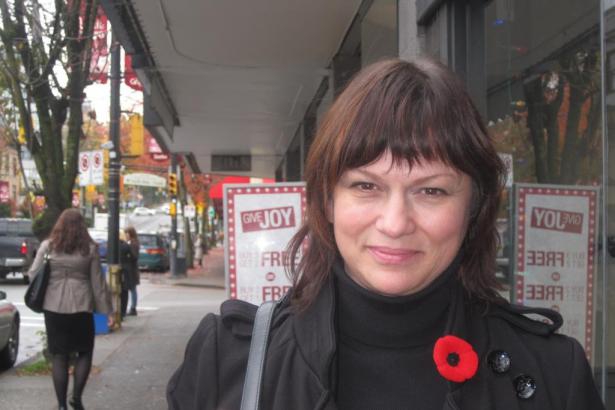 2011 Vancouver Municipal Election: Sandy Garossino is a woman who knows what she wants. On this damp Wednesday afternoon at a café on South Granville, what she wanted was a warm cup of hot chocolate.

Garossino also wants to become a household name. And so far, the independent council candidate has made good on her intentions to boost recognition – if her affiliation with the Vancouver Not Vegas Coalition wasn’t enough, she’s been out pounding the pavement, speaking to press, to voters and to hundreds of her followers on Twitter.

“I’ve been really thrilled with how the media has jumped on this,” she said, recounting the “wild ride” she’s been on since she announced her participation in this year’s municipal election. Despite the somewhat pessimistic assumptions that go along with running independently, Garossino said there are some definite perks.

“I think that there are a lot of advantages to running as an independent, especially in today’s era,” she said. “With social media being such a powerful driver, it’s really possible for a strong independent candidate to differentiate themselves from the pack.”

Without the party brand and the extra “PR”, Garossino explained that independent candidates can be much more accessible than those running on slates like Vision Vancouver or the NPA, especially when it comes to online media.

“All my tweeting I do myself. And I think that it really shows through. People really engage much more because they can see that they’re talking to the candidate and they can actually ask the candidate direct questions,” she said.

A former Crown prosecutor, business owner and arts advocate, Garossino has managed to secure a long list of endorsements from citizens and leaders in those respective communities. But she doesn’t want her background in business to slot her into a certain category.

“I come from the business community but I am also someone who worked really hard as a young person, put myself through university, very much with the benefit of programs that are no longer there for young people today,” she said.

The difficulties facing young professionals in Vancouver are just a small part of what inspired Garossino to get involved in civic politics. She said the decision came largely as a result of her campaign against the casino expansion and the issues around public consultation.

“Immediately following the casino decision in council, people were asking, was I planning to run? And I truly hadn’t even thought of it before. But there were a lot of people that asked me to consider it, and there was an enormous amount of support that came in.”

“What is it that has fed this popularity? It’s the fact that they are not looking for political advantage,” she said. “The party politics and ideology and conflict-oriented approach to government isn’t working. People want to see a different answer. They want another solution.”

According to Garossino, municipal governance doesn’t need to be (or possibly shouldn’t be) ideological or partisan. Instead, it should be about confidence and service.

“When I look at the municipal level, I really think we should be opening up politics to those independent candidates. And the success of those leaders shows that there is a great public desire for that.”

Who is Sandy Garossino?

Garossino’s resume is as impressive as it is diverse. The Vancouver-born businesswoman has a background in law, initially working as a Crown prosecutor and specializing in gang-related crime.

Inheriting the family business is something she and her husband Ravi Sidhoo have in common. Sidhoo, director of the West Side’s East India Carpets, took over the well-known carpet store from his own father. The business has been a local landmark at Fir Street and Second Avenue, open since 1948.

After selling the family taxi businesses, Garossino shifted gears to work in private investments and global partnerships, taking some time off to focus on caring for her kids. Her passion for the arts led her to an active involvement with local organizations and arts groups, including the Alliance for Arts and Culture and the Vancouver Biennale. She also founded House of Parlance Media, a publishing house for local artists and poets and like Shane Koyczan.

Now, with five grown children, Garossino has put her energy behind a new startup, as founder and CEO of Intellex Legal Project Management. Following her respected work with Vancouver Not Vegas, her city council nomination was a well-deserved next step.