No resolution yet in Occupy Vancouver hearings

City lawyers now seeking an injunction on grounds of trespassing, protesters arguing against removal of tents that house the homeless. 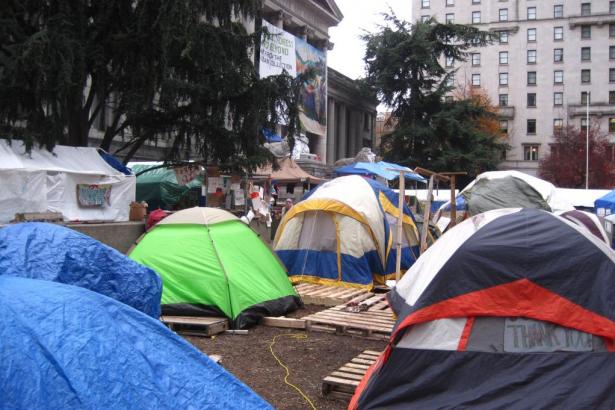 According to Occupy Vancouver lawyer Jason Gratl, about half of those in the encampment are homeless. Photo by Alexis Stoymenoff.

The Occupy Vancouver encampment is safe for yet another day after B.C. Supreme Court hearings ended Wednesday with little progress made on a possible injunction.

In the first day of three set aside for this week’s hearings, the City of Vancouver adjusted its application and is now seeking an injunction on the grounds that campers are trespassing at the Vancouver Art Gallery.

Ben Parkin, the lawyer representing the City of Vancouver, told Associate Chief Justice Anne MacKenzie that Occupy Vancouver protesters are in breach of a land-regulation bylaw that prohibits the erection of tents or other structures on public land.

“There's no dispute [that] people have erected structures on the property. They're sitting there right now,” Parkin said.

He noted that the City is no longer relying on fire-safety regulations as an element of its application. The City had earlier argued on those grounds and the month-old encampment was told to clean up and comply with the fire department’s specifications.

Jason Gratl, a lawyer for the Occupy Vancouver group, argued that the activities occurring on the Art Gallery plaza – which the City said constitutes trespassing – are in fact activities permitted by the constitutional right to free expression and assembly. He referred to the tents as “political structures” and an essential element of the movement’s objectives, making repeated references to the bylaw as “constitutionally suspect”.

“Your Ladyship should consider and weigh the effect of any injunction on the freedom of expression,” Gratl told Madame Justice MacKenzie.

“The Trespass Act does not assist [the City]; in fact, it makes it clearer that the constitutional argument must be considered.”

Before the City’s official injunction application could be heard, Gratl and colleagues representing Occupy Vancouver raised concerns that removing the tents would result in “adverse circumstances”. He said that approximately half of the encampment is comprised of homeless people, whose safety could be jeopardized if the City moves to enforce the bylaw.

According to Gratl, Vancouver lacks sufficient shelter beds to house the number of homeless. Those that do exist are often unsafe, he said, due to threats like sexual assault.

“They are unfit for human habitation because the dangers they pose,” Gratl said.

He cited two important cases in his argument, including that of the Falun Gong protest that has been going on for years on Granville Street.

The other case cited was a decision involving the City of Victoria v. Adams, which ruled that the homeless should be allowed to keep tents erected as a way to shelter themselves when there is nowhere else to go. This precedent called for permitting temporary overnight structures in areas like parks, when the number of homeless exceeds the number of shelter beds available – as Gratl said they did in Vancouver.

As much of today’s hearing was spent discussing constitutional issues and the possibility of a later trial on that matter, Parkin stood to express his frustration over the defendants’ attempts to delay the City’s current application.

“I could have finished my application by now,” he said at one point, irritated by the preliminary arguments that took up most of the day’s proceedings.

In response to his grievance, one protester attending the hearings shouted, “This is law!” – prompting a warning from Madame Justice MacKenzie for the gallery to remain silent.

After court adjourned, other Occupy Vancouver supporters attending the hearing said they were happy with many of the arguments brought up on their behalf.

“So far, so good,” said Sasha Wiley-Shaw, adding that in the end, it will come down to the judge.

"Nico," another Occupier in the gallery, said that the City and courts would be making a mistake by not listening to the protesters’ concerns. Still, if a decision is made to remove tents in the coming days, he said he won’t be putting up much of a fight, he said.

“If it finishes and they say we have to go, I’ll go,” said Nico. “I’m not going to stand there and get arrested.”

Occupy Wall Street around the world