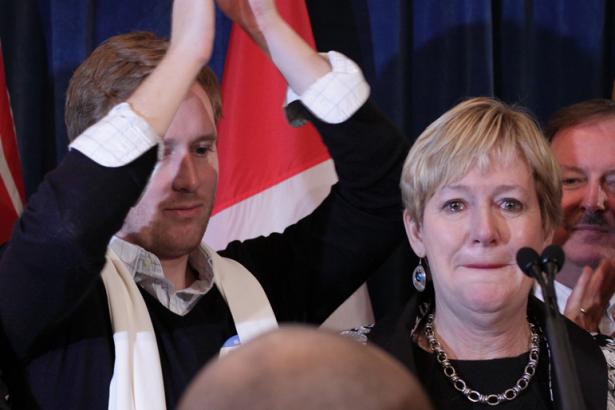 Here's a snapshot of early evening at NPA headquarters:

The first floor ballroom at the historic Vancouver Fairmont Hotel is filling up as NPA supporters make their way from the polls to the Anton HQ.

Approximately 200 people are here so far, drinking wine, eating sirloin steak and standing around the television live feed watching the results come in.

"Those who are informed knew that the park board hasn't been behaving properly or acting properly in regards to standing up for the independence of the parks -- and those people are marching to the polls," says NPA park board hopeful Jason Upton.

He is one of several NPA candidates trickling in. Suzanne Anton is rumoured to be in the building, but no sign of her yet.

"Informed people are not missing thier opportunity to vote for parks," Upton said.

Upton also commented on slate-voting, a tactic endorsed by some supporters of Vision and NPA camps.

"Those who don't know, they may vote slates or they may not vote at all. But I am counting on the difference to be made up by those who know the issues," he said.