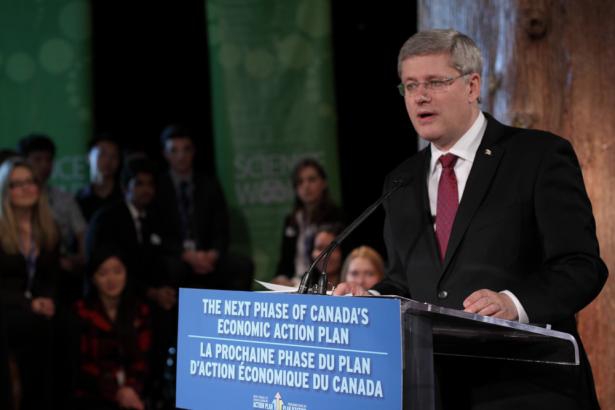 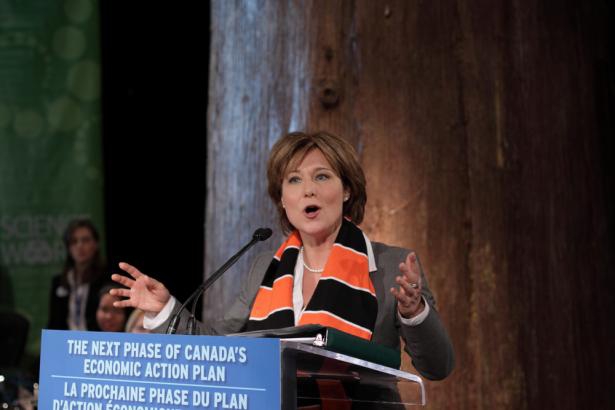 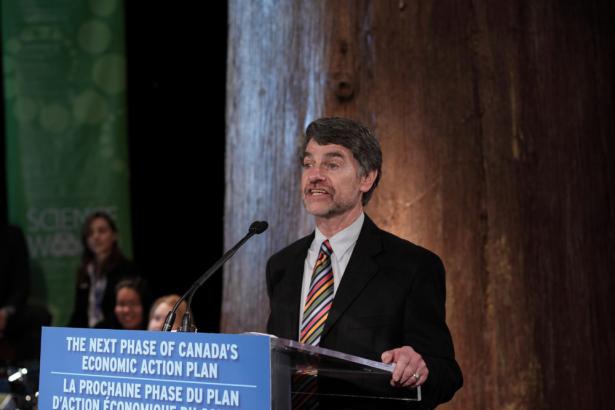 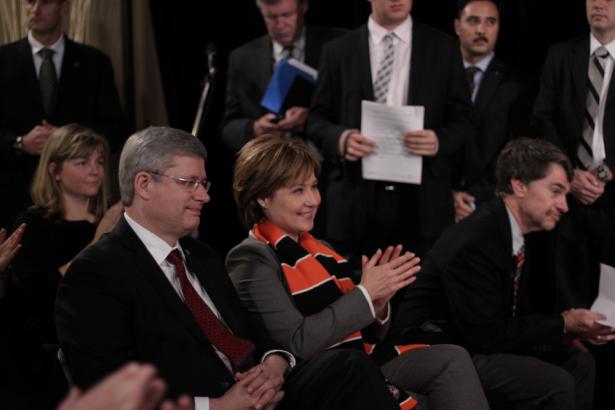 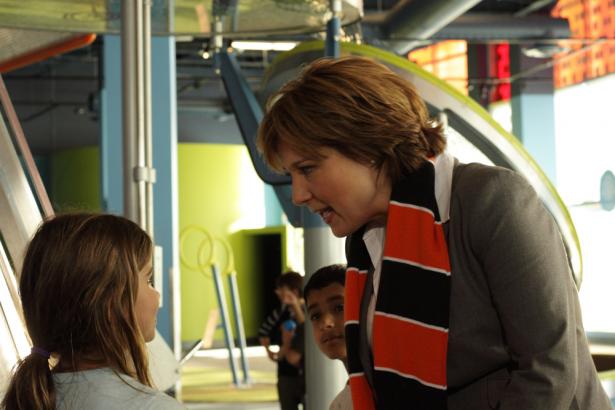 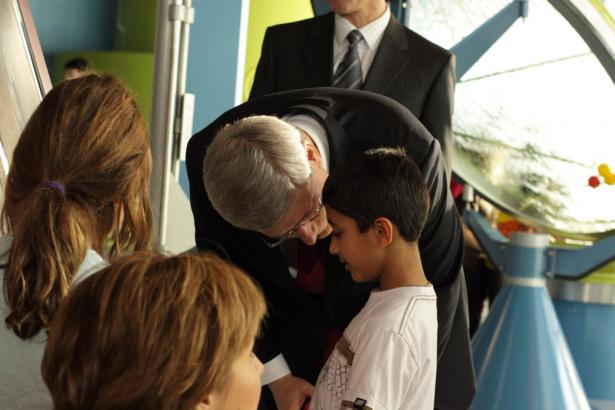 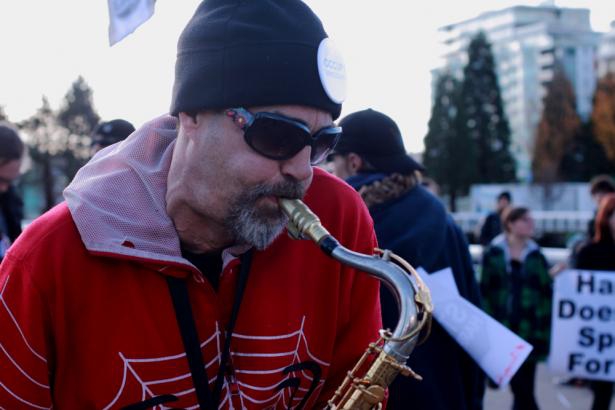 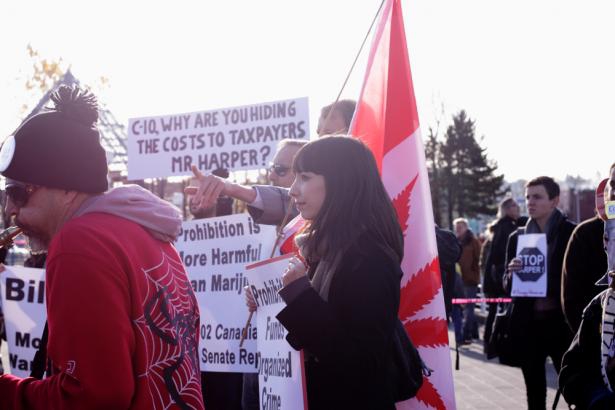 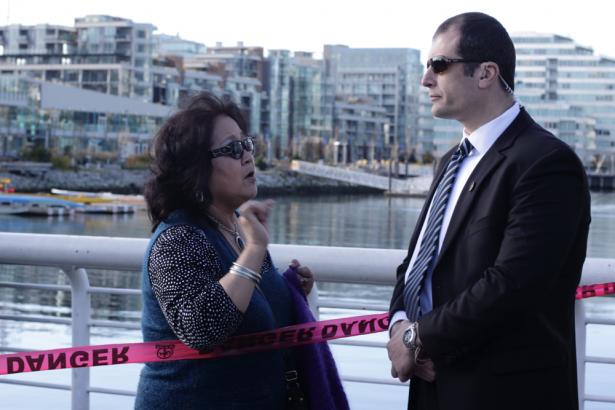 With about 60 Occupy Vancouver protesters parked outside and what appeared to be armed security on the roof, the newly renovated facility was under the spotlight, showcasing the outcome of a $35-million investment shared by both provincial and federal governments.

“I’m very glad to be here to help celebrate this milestone in Science World’s history, the biggest renovation since its opening in 1989,” said Harper, noting his government’s support through the Infrastructure Stimulus Fund within Canada’s Economic Action Plan.

“Through our investment in Science World, we’re not only building a culture of knowledge and innovation, we’re also supporting a major cultural and tourist attraction, and we’re helping to create jobs and growth here in BC, now and for many years to come.”

Ottawa provided $10.5 million toward the upgrades, with the province providing another $10.5 million. The final $14 million came from Science World British Columbia.

Clark expressed her own excitement about the project, claiming that Science World had inspired her son, Hamish, to seek a career in space tourism or autism research.

“My government is so delighted to be a part of helping renew this facility, because it brings tourists to our community, no question about it. But the most important thing that it does is get children interested in science,” said Clark.

Andrew Harries, chairman of Science World’s board of directors, outlined the three components of the upgrades, including the actual restoration, enhanced public spaces like the rooftop patio and the “greening” of the building. He said the new outdoor science park, which is currently still under construction, will be completed by spring of next year.

“The building has had a great deal of loving but boisterous use, and had gotten to a situation where it needed some loving attention if we were going to continue to provide the service we believe is so vital to the future and prosperity of British Columbia,” said Science World CEO Bryan Tisdall.

During the presentation, Harper emphasized that the economy remained his government’s number one priority, assuring visitors that Canada’s banks are in relatively good shape but noting that the country is “not immune” to problems afflicting other economies.

“Our government will continue taking action to protect Canadians, to create jobs and to lay the foundations for long-term growth,” he said.

Using an analogy based on a display in Science World’s “Eureka Gallery”, Harper explained how the experiment lifting a hippopotamus on a fulcrum could illustrate the amount of “heavy lifting” done by stimulus funding through the Economic Action Plan.

And pointing to Clark’s BC Lions scarf, Harper also expressed excitement for this Sunday’s Grey Cup game, and described the country’s Western Gateway as “one of the greatest cities in the world”. He later acknowledged a number of other politicians in attendance, including Heritage Minister James Moore, Richmond MP Alice Wong, Vancouver South MP Wai Young and False Creek MLA and Minister for Children and Families, Mary McNeil.

Introducing the prime minister, Moore described Harper as being “focused like a laser, as he promised to do, on the important task of keeping Canada’s economy growing.”

While Harper was inside, protesters representing a variety of causes were holding down the fort outside.

Holding a sign that read, “Harper hates science”, protester Savannah Kemp was watching the entrance as the his vehicle pulled away.

“He muzzles scientists,” she said, explaining the motivation behind her sign.

“For the whole time he’s been in office – from nuclear science to climate science, to the salmon fish farming – he’s fired hundreds and hundreds of government scientists. He’s closed down entire departments, and just hires more lobbyists.”

As the group of activists gathered around a police line protecting the politicians’ caravan, one “Anti-Harper” protester had their bike wheel run over by a security vehicle.

Apart from the Occupy Vancouver crew, there were also protesters advocating for reform in marijuana law. Marijuana activist Jodie Emery was among the recognizable faces present, wielding the signature Canadian cannabis flag and shouting, “End prohibition!”

Questions asked during Harper’s presentations had addressed the recent announcement by former Vancouver mayors, voicing their support for the potential legalization and taxation of marijuana.

Harper responded, expressing his administration’s opposition to such an idea.

“It’s not happening under our government,” he said.