Over 13,000 sign petition for cooperation between NDP, Liberals and Greens

NDP MPs and grassroots organizations like Leadnow are advocating for strategic cooperation between left-of-centre parties in Canada including the Greens. But could it really work? 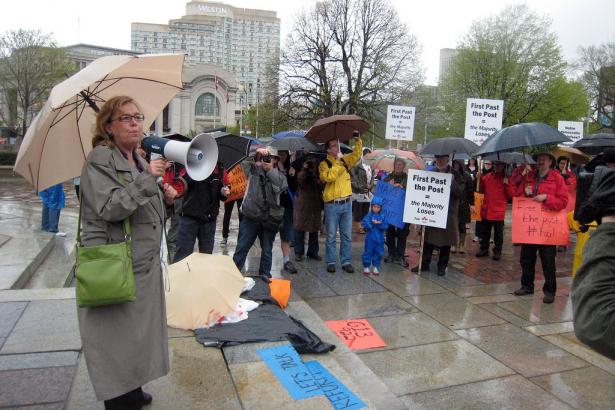 Green Party leader Elizabeth May - who supports strategic cooperation - speaks at a 2011 rally for electoral reform. Photo by ahblair

The movement for cooperation between Canada's left-leaning parties is gaining momentum as the best chance to defeat the Conservatives -- themselves a product of a "Unite the Right" campaign.

A new petition from independent organization Leadnow has garnered over 13,000 signatures in support of cooperation between the NDP, Liberal and Green parties. The group’s aggressive new campaign, Cooperate for Canada, joins political voices like NDP leadership hopeful Nathan Cullen as part of a renewed push for strategic cooperation on the left. But according to Liberals like Vancouver Centre MP Hedy Fry, it’s not going to be an easy sell.

What proponents like Cullen and Leadnow are advocating for is not a merger, but a cooperative strategy that could involve joint nominations to run candidates in a way that prevents another Conservative majority. While some NDP MPs are apparently willing to consider the idea, most Liberals say it’s not even on the table.

“There is absolutely no discussion about that,” said Fry.

“It was done once with the Liberals, and that was when Stephane Dion was the leader and we stepped aside to allow for the Green Party’s Elizabeth May to run in [her] riding. And we all thought it was a mistake later on, in hindsight.”

Fry says the main reason for the party’s regret came from disappointed Liberal supporters, who complained about being robbed of the chance to vote Liberal in the election. But for the increasing number of Canadians who support cooperation, setting aside party differences may be the only way to defeat the current Conservative government.

Leadnow co-founder Jamie Biggar says it all comes down to how our current electoral system operates.

“In the last election, we saw that over 60 per cent of Canadians voted for change. They voted for the NDP, Liberals and Greens or Bloc,” said Biggar, noting common frustrations with the resulting Conservative majority.

“There’s just this huge disconnect between what people voted for in the last election and the government that we ended up getting. And the reason for that is this first-past-the-post electoral system that we have.”

Under the country’s current electoral system, the candidate with the most votes wins regardless of whether or not they’ve secured an absolute majority. Splitting the votes across opposing parties meant success for the present Conservative government, even though more Canadians voted against Prime Minister Stephen Harper than for him.

“From our perspective the question is, what do we do to make our democracy work better going forward? And we think that there’s no kind of easy solution to that, but we think that a practical pro-democracy strategy would be to have the NDP, Liberals and Greens agree to cooperate,” said Biggar.

So far, Skeena-Bulkley Valley MP Nathan Cullen is the only NDP leadership candidate who has raised the idea of strategic cooperation with other parties. In an interview with the Observer, he echoed Biggar’s opinions about the need for electoral reform.

“We need a one-time offer to get into government and change the voting system to some form of mixed-member proportional representation – something that says, 'When you vote, your vote will be reflected in the parliament',” he said.

Cullen’s suggestion is to have run-off elections before running campaigns in Conservative ridings, essentially to combine forces in those individual ridings and shut out Tory candidates.

“That's a very post-partisan, evolved kind of politics. It's hard for people steeped in partisanship to come to. You've got to ease them into the conversation. It's necessary because it guarantees a cooperative, progressive government,” Cullen said.

For Fry, however, this type of pre-election strategy is "undemocratic" and is almost like "fixing" the vote.

"We're talking about a democracy here, and there are registered and full parties sitting in this country. If you rig it, and fix it so that you get the desired result, that's not democracy," she said.

A critical time for Canadian politics

With the NDP set to elect a new leader, Biggar says it’s a critical time to get more voters on board with the idea of cooperation. This week, Leadnow is frantically trying to get the word out to supporters about the upcoming deadline of February 18—the last chance to register as members with the NDP and have the chance to vote in the leadership race.