With NDP, Liberals and civil society groups criticizing Canada's secretive CETA agreement, VO launches a series on its impact on Canadians' water, democracy, jobs and health. Part I takes a broad look at CETA - and the secrecy surrounding it. 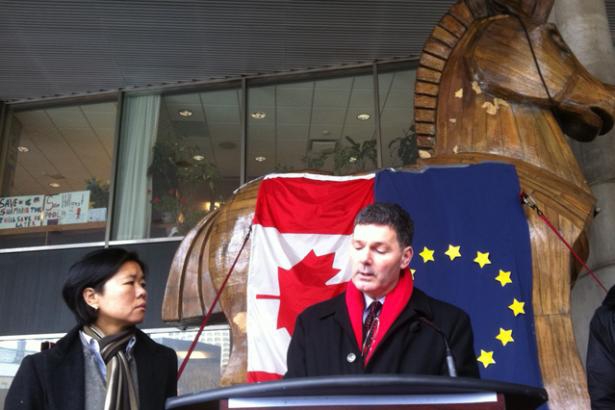 After a wood Trojan horse was delivered to City Hall, Toronto City Council voted to exclude itself from the Canada-Europe free trade deal this year, though the move was largely symbolic.

Canada's international trade minister has boasted that his European free trade push is the “most ambitious plan of its kind in history” – yet the close-to-complete agreeement is still cloaked in secrecy.

The sprawling deal, The Comprehensive Economic and Trade Agreement [CETA], has also drawn fire because of provisions allowing corporations to sue municipal and provincial governments over lost profits resulting from “discriminatory” policies. For example, if a city wanted to hire a local only company for water services, it might face a challenge by competing multinationals. Europe, it turns out, is the home of the largest multinational water companies in the world.

"They haven't explained to people what's in it," Stuart Trew, trade campaigner for the Council of Canadians, told the Vancouver Observer. “I think they don't necessarily want to talk about CETA.

"It's a lot easier to pass it and get it through Parliament quickly if no one's talking about it. But transparency implies some capacity to actually affect the negotiations or the deal on table. That's non-existent – as it has been in other trade deals.”

CETA emerged in the news earlier this week, when Canada's High Commissioner to the UK – former B.C. premier Gordon Campbell – told CTV news that the deal is still on track for completion this year.

“The major issues are now, sort of, dealt with,” Campbell said in a televised interview. “They've got some very intense negotiations going on now.

“I think by the end of this year we'll have an agreement ready for consideration.”