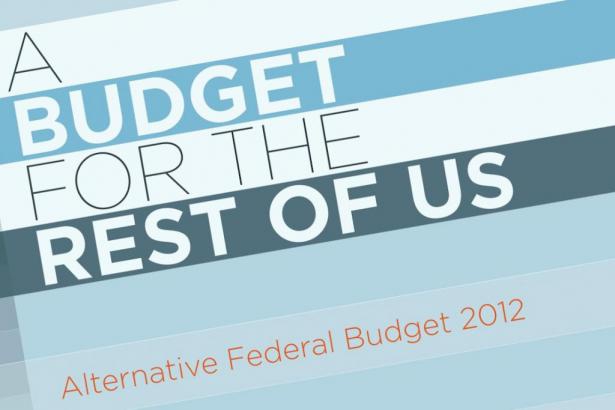 That federal budgets are all about political priorities may be a truism. But as the Conservative government prepares to table its annual spending plan next week, the CCPA's alternative federal budget 2012 reminds an increasingly polarized public that there are other ways to spend.

Releasing their 16th annual fiscal wish-list today – the weighty 202-page Alternative Federal Budge 2012 – the Canadian Centre for Policy Alternatives (CCPA) called on the government to shift its spending from security and military onto social programs and jobs. No one imagines Prime Minister Stephen Harper stopping the presses if he reads the report.

“It may not be something the Tories will store on their desks, but there is no monopoly on good ideas,” David Macdonald, the CCPA's chief economist, told the Vancouver Observer. “The Alternative Federal Budget has historically had good ideas, and some of those have made their way into all three parties' budgets.

“Budgets are about choices as much as they are about financing. If we look at areas of the federal government that have grown dramatically in the last five to 10 years, those areas would be defence, and the whole security and defence establishment: it's the RCMP, CSIS, border security, justice, and public safety. Those are certainly areas that could be trimmed back to better serve Canadians.”

A team of roughly 50 authors assisted in producing the CCPA's alternative federal budget 2012. This year's budget is the largest the think tank has produced in 16 years, Macdonald said. They include not only professional economists, but also organizational staff across the country working in affected sectors. In the alternative budget's history, some of its proposals have eventually made it into legislation, he claimed – citing a guaranteed income supplement for poor seniors and Aboriginal proposals as past successes.

The alternative federal budget proposes ratcheting up spending on infrastructure, low-income housing, and universal day care, and paying for that out of reduced military spending, higher corporate taxes, and a new 35 per cent tax bracket for Canadians earning more than $250,000 a year.

“We cost the proposals out and put them together in an implementable package. The Alternative Federal Budget . . . puts them to the test. It's not that they cost too much and we'd have to double taxes. We could actually do these things.”

To craft the alternative-reality document – a fantasy Canada sans Harper, if you will – the CCPA consults with community groups, unions and other organizations, researches their proposals, and performs the economic analysis on how much they would cost and where that money could come from.

“That's a benefit,” Macdonald said. “It really is a large group of experts that we draw from.

“There's this bizarre need to continue to build prisons despite fact that crime rates are at historical lows. There are real needs on the social side, whether it's getting people to work through child care plans, or creating jobs.”

This year's Alternative Federal Budget arrives a week before finance minister Jim Flaherty will unveil the Conservative government's first fiscal plan of their majority. Where in the past the government had to compromise its objectives under a minority government, this time around Prime Minister Stephen Harper has promised to slash spending – introducing austerity measures to gut somewhere between $4 billion and $8 billion a year, claw back civil servant jobs, and reduce pension benefits.

The alternative budget, for its part, criticizes the Conservatives on their own terrain – economics. While mainstream economists might scoff at a left-wing think tank's suggestions on fiscal matters, that is precisely what the trained economists at CCPA intend to do, they said.

“We sketch that out, how we could drive down unemployment with a proactive plan, instead of hoping the private sector will do it for us.”

So is this just a front for the New Democratic Party (NDP) – which tends to share a progressive base of supporters with the CCPA?

“Compared to the NDP's budget, there are some significant differences,” Macdonald said. “The NDP doesn't tell us what they want to see, that's not how we work.

“For example, a carbon tax: that's certainly not something the NDP has been interested in, given the beating the Liberals took in the last election. But it's something can want to see action on. In our health care chapter you'd also see differences from NDP. There's some overlap in terms of the big ideas, but actually on policy ideas, we are quite different.”

While the CCPA's 202-page document might seem inaccessibly monumental, it pales in comparison to the tome Flaherty will table on March 29.

“I think the federal budget is 500 pages – so we have a ways to go!” Macdonald said, laughing.

Canada's 2010 federal budget does not invest in the change needed in First Nation education, Atleo says

Flaherty concedes that global turmoil will impact economy, but will "monitor closely"