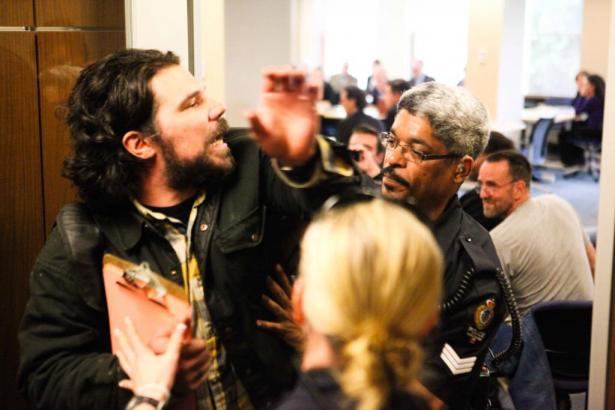 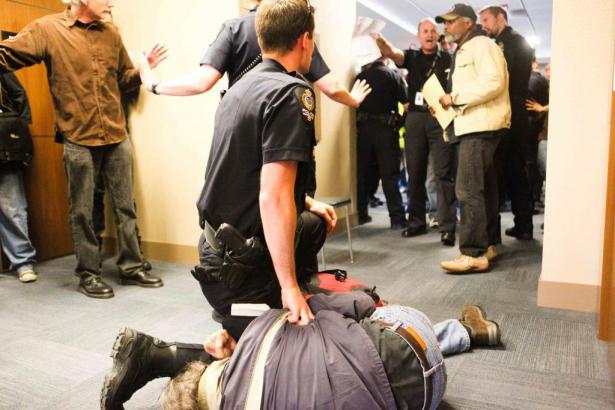 Ivan Drury, with the Downtown Eastside Neighbourhood Council (DNC), was removed from the city development permit board hearing. Dave Diewert, with the faith group Streams of Justic was thrown to the floor in the fracas. Photo by David P. Ball

The city's public review of the controversial Sequel 138 condominium development near Hastings and Main Street – the heart of the impoverished Downtown Eastside (DTES) – came under fire today as roughly 90 residents came to the city development permit board hearing to oppose the project's approval. After six hours of speakers, the committee approved the application.

The protesters – who say the project would raise prices and drive poor residents out of the neighbourhood – expressed outrage after only a few pre-registered speakers were allowed into the meeting of the city development permit board, the majority segregated into a separate video chamber.

The committee asked residents to register if they wished to speak, and welcomed roughly 40 into a public gallery. However, police and security officers forcibly removed two DTES residents, including Dave Diewert, organizer with the faith group Streams of Justice, who was thrown to the floor in front of the Vancouver Observer, after they shouted that the hearings should be held in the larger chambers upstairs in order to accommodate community voices.

The developer has proposed 79 units of residential units and 18 units of social housing, as well as commercial units at the street level.

“When you have polarized views, there's no middle ground for strategy or negotiation, or solutions,” said Anthony Kuschak, a marketer for the Sequel 138 development. “The Sequel project is trying to move from pure market condos to more affordable condos, plus have amenities that deliver urban gardens, deliver a social housing component, deliver healing arts programs.

“So it's not just a condo building, but it's a building that participates in the neighbourhood that exists and that needs to evolve.”

But the Downtown Eastside Neighbourhood Council (DNC), which organized the demonstration against the proposal, said the community opposes condominiums in the area because they will contribute to gentrification -- a process in which costs of living rise as urban areas transitions from renters to owners, displacing poorer residents.

“It is clearly opposed by the community,” said Ivan Drury, representing the DNC. “What they call 'clean up,' we call displacement.

“A lot of the most marginalized people in the community live on the 100 block – the Washington, Sunrise, the Balmoral and Regent Hotels. These are hotels for people who don't belong or fit in anywhere in the city to live. These are places where the most marginalized people in society – people who are multiply oppressed and discriminated against – go to be accepted and be at home.”

Inside the City Hall hearings, Abi Bond, the city's Assistant Director of Housing Policy, addressed community criticism of the project and demands for social housing geared to low-income renters.

“While there is significant community opposition to this proposal, the applicant has met their requirements,” she told the committee.

“We're working with our public and private sector partners to deliver social housing,” she added. “It's not like we're relying on large amounts of government funding to deliver our targets.”

Dozens of people approached the microphone to raise their concerns or support. Although the majority were opposed to the project, several voices backed the Sequel 138 project.

"We welcome a residential development,” said Fern Jeffries, with the False Creek Residents Association. “It will contribute to revitalization of our community. . . We're very impressed with this project.

“Market housing in our neighbourhood is an important element in keeping families together. We seek a balanced community with a sustainable economic base and a rich social fabric. The current scene of open drug dealing is unacceptable.”

City Manager Brena Prosken told the Vancouver Observer that the choice of the ground-floor meeting room -- which sat roughly 40 people -- is the norm for committee meetings. The newly renovated meeting room was chosen because it could accomodate more people than the usual, she added. However, critics disputed that claim, pointing to past committee hearings in the City Council chambers as evidence the restrictions were not the norm, but instead intended to shut out DTES voices.