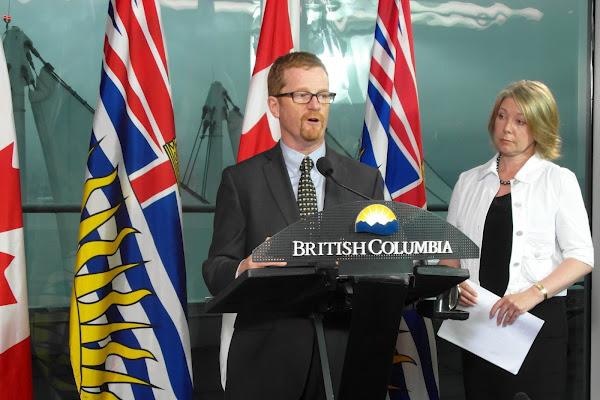 Lake said the government's conditions were not a "tacit approval" of the project, but "minimum conditions" that will guide the BC government's consideration of the proposal. He said that this was an opportunity for BC and Canada to develop world-class standards for safe oil pipelines.

"Neither the government, nor the industry, has any idea how to actually deal with heavy oil spills. The fact is, we know that bitumen sinks, and they don't yet know how to deal with that in a marine environment.

"So their claims that they can create world class standards, that they can ensure that the British Columbia environment and coast is protected, are simply false," Berman said, after talking with Minister Lake following the government's announcement at Canada Place.

"They are giving us no assurance that they will put the concerns and safety of British Columbians above those of Big Oil."

"This smells a lot like they're trying to pave the way to bring dangerous pipelines and tanker traffic that will benefit big oil acceptable in British Columbia. The fact is, these pipelines pose unacceptable risks to our environment and our economy," Berman said.

Anticipation about the BC government taking a firm stance on the proposal began building over the weekend after Premier Christy Clark stated publicly that the project posed a "very large risk" with a "very small benefit" for BC.

Minister of Aboriginal Relations Mary Polak and Lake spoke to a crowded room of reporters from local and international news outlets. Polak said while First Nations while don't have veto over the project -- she repeated this four times during the conference -- they do need to be adequately consulted.

"To date, BC First Nations do not appear to have been appropriately and meaningfully engaged," she said.

She said the government is not aware of any First Nations community that currently supports the project. 97 per cent of those who spoke at the hearing so far were opposed.

"I think that it's offensive that the government is simply not listening or responding to the concerns expressed by First Nations," Berman said about the government's statements.

The government developed a set of tools for First Nations to work with industry on economic development, Polak said, but did not say what role these tools will play in the government's evaluation of Enbridge's consulation with aboriginal groups.

Eric Swanson of the Dogwood Initiative, dismissed the government's strategies as divisive and politically damaging.

"If this government does set out those conditions, and after more wait-and-see and more review, decide that they're going to approve the thing against the wishes of the most affected people, they're going to hurt in the next election," Swanson said.