The Canada-China Foreign Investment Promotion and Protection Act (FIPPA), Canada's biggest foreign trade treaty since NAFTA, will come into effect at the end of October and bind both the federal and provincial governments of Canada to its clauses until 2043. International investment law expert and Canadian citizen Gus Van Harten says provinces have a strong case for challenging the treaty on constitutional grounds. 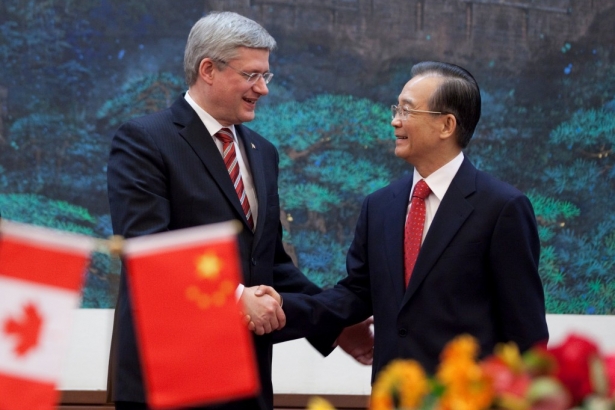 Prime Minister Stephen Harper shakes hands with Wen Jiabao, Premier of the People's Republic of China, in the Great Hall of The People in Beijing, China. PMO photo by Jason Ransom.

With two weeks remaining before the controversial Canada-China Foreign Investment Promotion and Protection Act (FIPPA) is ratified, international investment law and treaty expert Gus Van Harten says BC has the option of delaying the treaty's ratification through the courts.

"The province can call for an injunction in the BC Superior Court, requesting the courts to order the federal government not to ratify the treaty until the constitutional issues are resolved," Van Harten told The Vancouver Observer.

The other option, Van Harten added, was an upswelling of public opinion against the treaty that would pressure elected officials in Parliament as well as provincial legislatures.

According to international law, a foreign investment protection agreement (FIPA) treaty binds the state regardless of changes in federal or provincial governments.

"It's a done deal between the two countries—by signing a treaty, the Harper government can bind future governments and bind the Canadian electorate for 31 years," Van Harten said.

Van Harten— who has a PhD in international law from the London School of Economics and teaches law at Osgoode Law School— is one of five internationally recognized experts in Canada on international investment and treaty law and how they work on a practical basis. He said that he is an outlier for speaking out, based on his experience.

"The difference between me and many others is that a lot of academics work in the system as lawyers or arbitrators or experts, and they're much more cautious about saying things that are critical of the system," he said.

He noted that FIPPA is good news for lawyers, who stand to profit from the potential multi-million dollar lawsuits.

"The lawyers who work in this field will like that—their business is to sue," he said. "It's not good for Canadian taxpayers."

BC isn't the only province that has a strong case in courts against the federal government over FIPPA because they face potentially serious fiscal risk if Chinese companies invest in major assets.
"It could be Ontario down the road, it could be the ring of fire— which is a strip of mineral rich land in Northern Ontario. In the north, there could be development of mines in northern Canada," Van Harten said. "Same with Saskatchewan, with the mineral right there."
"In Alberta, the Alberta economy is going to have a significant portion of Chinese ownership in its resource sector, and if Alberta was concerned for a long time about not having control over its resources vis-à-vis the federal government, how does it feel not having control over its resources vis-à-vis Chinese investors?"

The only provincial governments that shouldn't be concerned about FIPPA are the ones which won't expect to be getting any significant Chinese ownership of assets, Van Harten said.

Van Harten also sent letters to premiers of all across Canada, including BC Premier Christy Clark. He did this to help the provinces understand the scope of the fiscal risks this treaty will have on them and taxpayers.

Clark's Press Secretary Michael Morton confirmed that Clark's correspondence branch received the letter. Clark did not respond to questions from The Vancouver Observer about her reaction to any of the concerns it raised.

BC Minister of Environment Terry Lake responded to Van Harten's letter to the Premier and concerns about FIPPA in a written statement, calling the letter "speculative":

“We are intervenors in the hearing and examining issues that are critical to our five conditions that must be met on all pipeline projects in BC. At the same time we are working with our federal counterparts on [Northern Gateway Proposal] related issues where BC’s interests are at stake."

"As this is ongoing work and international treaties are the purview of the federal government I am not going to comment on speculative comments by Mr. Van Harten.”

Rick Mercer takes on the Harper government's next omnibus bill