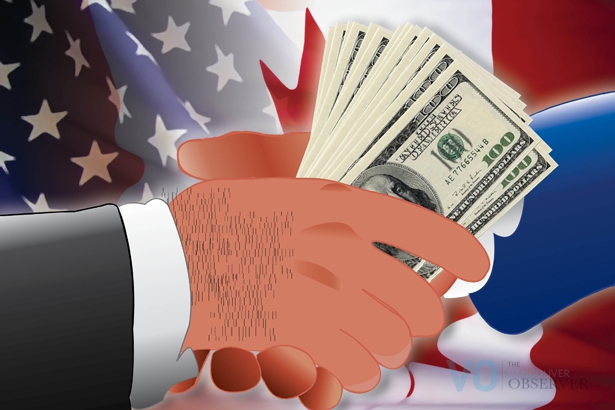 Graphic by Craig Fleisch (craigfleisch.ca) for The Vancouver Observer.

The Fraser Institute, Canada's leading right-wing think tank, received over $4.3 million in the last decade from eight major American foundations including the most powerful players in oil and pharmaceuticals, The Vancouver Observer has learned.

In May, it was found that the US oil billionaire Koch brothers gave the Fraser Institute half a million dollars since 2007.  But further investigation shows the insitute received funding from other major US foundations.

The issue of foreign funding of progressive Canadian charities has been under scrutiny since Natural Resources Minister Joe Oliver released an open letter last January accusing "environmental and other radical groups" of influencing Canadian politics.

He said that these groups "use funding from foreign special interest groups to undermine Canada's national economic interest."

The rhetoric from Ottawa came amidst increasing opposition nationally to  the proposed Enbridge Northern Gateway pipeline, which Prime Minister Stephen Harper has said is "of vital interest" to Canada.

The government focused on environmental charities being funded by Tides Canada, and also targeted the David Suzuki Foundation, which opposed the pipeline.

In June, the government passed Bill C-38, an omnibus bill which included an additional $8 million to the Canada Revenue Agency to audit charities suspected of receiving foreign funding to finance political advocacy beyond the accepted 10% of overall activities allowed under CRA codes.

"Basically, they (government authorities) are trying to undermine the anti-pipeline wing of the environmental movement by associating it ... with radicalism,” said Laurentian University sociology professor and national security expert Gary Kinsman.

But the Fraser Institute apparently has not been the subject of scrutiny, despite the fact that, according to U.S. tax documents, from between 2000 and 2010, the charitable orgainization received substantial money from American foundations.

"The Fraser Institute gets taxpayer's money as a write-off and they do nothing but influence public policy," Liberal Senator Grant Mitchell told The Vancouver Observer.

Foreign funding: for which projects?

The Fraser Institute received $1.7 million from "sources outside Canada" in one year alone, according to the group's 2010 Canada Revenue Agency (CRA) return.

Fraser Institute President Niels Veldhuis told The Vancouver Observer that the Fraser Institute does accept foreign funding, but he declined to comment on any specific donors or details about the donations.

The Fraser Institute describes itself as an "independent non-profit research and educational organization". It advocates for policies to support free enterprise and small government. Critics have cited endeavors such as publicly calling on the government to change election spending laws, or pushing provinces to adopt “right-to-work” legislation.

The Fraser Institute regularly publishes studies, news releases, videos, articles and commentaries criticizing Canadian public health care and promoting faster approval times for drugs in Canada, frequently citing the U.S. as comparison.
In 2011 it called for a five-year suspension of the Canada Health Care Act to experiment with cost-sharing and privatization.

The institute has also been an incubator for Canada's leading conservative public figures. Ezra Levant, a Sun media television host, columnist and author of Ethical Oil, interned at the Fraser Institute after a fellowship with the Koch Foundation. Levant is now one of the most outspoken proponents of big oil projects in Canada, having given numerous presentations on economics, as well as a special three-part presentation called "Ethical Oil: Ezra Levant and the Case for Canada's Oil Sands."

Wildrose leader Danielle Smith interned at the Fraser Institute during her twenties, an experience which “imbued her with a passion for Ayn Rand and charter schools”, according to The Walrus Magazine.

She became an intern with the encouragement of Tom Flanagan, a Fraser Institute senior fellow and Stephen Harper mentor.

The institute's considerable funding from US foundations have stirred no criticism from Ottawa.

Liberal Senator Robert W. Peterson criticized the government for unbalanced treatment of charities. "You have to be fair to all, not just pick on one group that doesn't share your views.There has to be a level playing field," he said.

Last 10 years of foreign funding for The Fraser Institute

Eli Lilly and Company is a global pharmaceutical corporation, with offices in 17 countries.

The company is no stranger to political and medical ethics controversies.

It is the sole manufacturer of Posilac (also known as Bovine Growth Hormone, or BGH) a controversial hormone used to boost milk production in cows.

BGH was banned in Canada, Australia, New Zealand, Japan, Israel and all European Union countries with reports linking an increased risk of cancer with the hormone. Lilly bought the rights to BGH from Monsanto, a multinational corporation widely condemned for its unethical business practices.

The Fraser Institute has published a number of reports and commentaries about policy reactions to climate "alarmism”.

Al Jazeera reporter Bob Abeshouse wrote that the Kochs are "radical libertarians" who have "poured millions into think tanks and academia to influence the battle over ideas."

“The Koch brothers gave the money that founded it [The Tea Party.]  It’s like they put the seeds in the ground,” a Republican campaign consultant who worked for the Koch brothers told The New Yorker.

They fund the climate denial machine through the Cato Institute, which they founded and funded to the tune of $14 million.

The Searle Freedom Trust was founded in 1998 to "foster research and education on public policy issues that affect individual freedom and economic liberty."

Among its chairs is Christopher DeMuth, former president of The American Enterprise Institute for Public Policy Research (AEI) -- one of the most influential pro-business and conservative think tanks in the United States.

2010 contribution: $17,421
Total combined contributions since 2001: $145,061
Source: Foundation Center.
Derwood S. Chase, Jr., who leads the foundation and a boutique investment firm based in Virginia, is also on the board of trustees with David H. Koch at the Reason Foundation, an influential right wing think tank in the U.S.
The Chase Foundation of Virginia is also a regular donor to the Montreal Economic Institute.
5. Pierre F. and Enid Goodrich Foundation

2010 contribution: $15,000
Total combined contributions since 2001: $170,000
Source: Foundation Center.
The Foundation is one of the Fraser Institute's most consistent funders, contributing every year since 2001 between $10,000 up to $30,000 per year.
According to Bridge Project, it contributes regularly to other pro-free market and libertarian think tanks such as the Heritage Foundation, Atlas Economic Research Foundation and the Koch-founded Cato Institute.

The John Templeton Foundation is known as one of America's wealthiest Conservatives, pouring money into SuperPACs (political action committees) to help elect religious right wing Republicans to U.S. Congressional and Senate positions.
John "Jack" Templeton (nicknamed "The Devout Donor" by Bloomberg Business Week) was part of the Koch brothers' million-dollar donor club events, according to an article by Gavin Aronsen in Mother Jones Magazine's inside account of a Koch brothers' seminar.
Templeton, however, is too complex to label as purely "conservative". His foundation has provided funding to support the Dalai Lama, as well as anti-gay marriage groups.
Prominent scientists have criticized the John Templeton Foundation for attempting to apply scientific legitimacy to religious questions.
The Foundation also awarded the Montreal Economic Institute its 2004 Templeton Freedom Award Grants for Institute Excellence.
7. The Lynde and Harry Bradley Foundation, Inc.

2010 contribution: $0
Total combined contributions since 2001: $20,000
Source: Foundation Center.
The Lynde and Harry Bradley Foundation is one of the "largest philanthropic foundations responsible for the financial backing of the right-wing agenda for nearly twenty years," according to Right Wing Watch.
The foundation's mission is “strengthening American democratic capitalism and the institutions, principles, and values that sustain and nurture it."
“We’re part of the right-wing movement,” said the foundation president and CEO Michael Grebe to the Milwaukee Journal Sentinel in 2011.
According to the Bridge Project, it has donated to "virtually every major player in the conservative intellectual cavalry," such as the Heritage Foundation, the American Enterprise Institute, and the Cato Institute.
In 2010, the Bradley Foundation gave away over $42 million.
From 2001-2009 it handed out almost as much as all seven Koch and Scaife foundations combined.
8. The Jeld-Wen Foundation

2010 contribution: $0
Total combined contributions since 2001: $15,000
Source: Foundation Center.
The Jeld-Wen Foundation was founded by Richard D. Wendt, funded by his window and door manufacturing company.
It sponsors right-wing think tanks such as the Cato Institute, but also raised funds for the David Suzuki Foundation.
No comment from Canada Revenue Agency on political activities

Minister of National Revenue Gail Shea stated that she could not comment on any specific cases, including the Fraser Institute's political activities.

"Our Government understands that registered charities are an important part of our society, and encourages Canadians to donate generously, but also to do their homework," she wrote in an email to The Vancouver Observer.

"In order to protect Canadian interests we have a duty to ensure that these organizations are operating properly and in compliance with federal laws. In cases where the activities of a charity are suspect CRA will conduct a review and take action as appropriate under the Act."

With files from Jenny Uechi

Tides Canada recognized as leader in transparency and governance