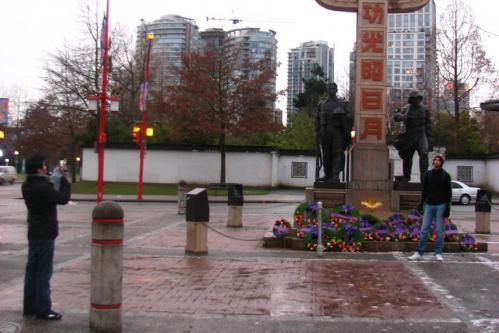 In the spirit of beautifying Vancouver's Chinatown, a public art competition was conducted in 2002 by a committee and selection panel with $150,000 in funding from city council.

Due to location obstacles including extravagant foundation expenses and plans for a neighbouring 140 ft. high pagoda, the competition stalled.  In the interim, a group of Chinese-Canadian WWII veterans, "equipped with a real sense of grievance" came forward with a vision for a monument.

The Chinatown Beautification Committee withdrew the public art competition and the space was given to the war veterans. Their memorial was then funded under the five-year Vancouver Agreement, as a way to not only "commemorat(e) the significant contributions of Chinese Canadians to the growth, vitality and prosperity of Vancouver, British Columbia and Canada, but so also, to contribute to "revitaliz(ing) a historic area of the city".

Honourable Hedy Fry, in a November 6th, 2003 Parliamentary session, stated that the monument "honours the same Chinese immigrants who gave their lives in the war to protect a country that at the same time denied them citizenship and the right to unite with their families".

This Monument to Chinese-Canadian veterans was cast in China by Chinese sculptor and muralist, Shu ren (Arthur) Cheng to recognize the efforts and lives of the Chinese who built the Canadian Pacific Railway from 1881-1885 and fought in WWII from 1939-45.

The monument was erected in an obscure location at the base of Keefer Triangle, next to a small parking lot in Vancouver's Chinatown.  Funded by Western Economic Diversification Canada, the 20-foot high concrete "Zhong" character (symbolizing Chinese, moderation and harmony) flanked by two six-foot bronze figures sculpted in the round, has stood alone since its commemoration on Remembrance Day, November 11th, 2003.

The heroic stances of both the WWII soldier and railway worker can be experienced from several angles and the monument carries the weight of Keefer Triangle, where Keefer and Columbia streets meet at the bottom section of a gentle slope where an air of emptiness hangs.  Yet the monument stands in a crossroads, rather than a space "bounded" and "intimate", like that of the "urban square" where people can come together and find community. 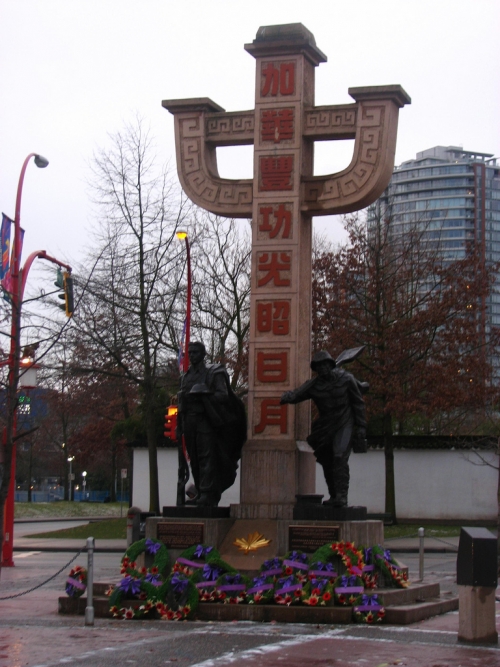 On occasion, tourists stop to take their photos with the figures, represented in idealized period uniform.  Standing to attention at the right, the soldier carries a rifle; his body is stiff and upright, not curved naturally in contrapposto.

The focus is on the figure's selfless service to a country that failed to adequately recognize his people's contribution.  So, too, the railway worker is depicted, however, in dynamic forward movement, shovel in hand and work clothes carried behind by an implied wind.

The tools they carry necessarily represent the heroic trades they stand for.