Evaluating whether heavy oil pipeline projects are in the public interest can be a challenge when information put forward by proponents is not transparent.  When this happens, they must be held accountable.

This is important especially in the area of economic benefits—one of the main drivers behind energy infrastructure projects.

The most recent case in point is Kinder Morgan’s proposed Trans Mountain expansion. A recent video on the company’s website enthusiastically promotes the economic benefits of the project. The voiceover warns of vast economic losses if we don’t approve Trans Mountain’s expansion and huge gains if we do. 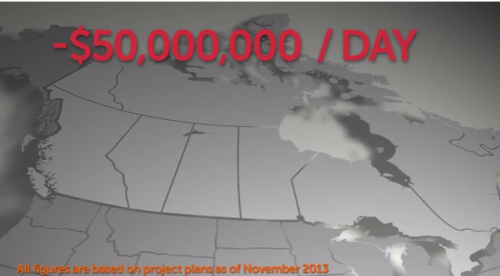 Kinder Morgan Canada was contacted to find out how the information was formulated. Their President, Ian Anderson had promised in his speech at the Vancouver Board of Trade to be open and transparent and willing to deal with the tough issues. Anderson's spokesperson tells us instead:

“The full economic reports and data used for these presentations will be contained in our Facilities Application to the National Energy Board, which we will be filing before the end of the year.” Hardly fair.

It was, however, possible to confirm the source of the video’s opening threat that not moving diluted bitumen through BC and onto supertankers is costing us. Kinder Morgan claims, “right now Canada is losing out on more than $50 million dollars a day in oil revenues.” That figure comes from a Canadian Chamber of Commerce publication titled “$50 Million a Day”.

There is no original research in the Chamber’s report. They cite four sources: A speech by Natural Resources Minister Joe Oliver in December 2012, a newspaper article quoting a statement by CIBC’s Andrew Potter’s in March 2012, a Canadian Energy Research Institute (CERI) study from July 2012 and a Canada West Foundation release last February.

Canada losing out because of a lack of pipeline infrastructure is an old story. The Chamber released a very similar report last February—so essentially their new document is a recycled version of their earlier pamphlet. Last April, I tracked down the underlying logic and the source of all the numbers.