How renewables and electric cars may give the climate new hope

The IPCC Report released this past week paints a bleak picture for the global climate in the 21st century. A range of human impacts are predicted, including food shortages, droughts, extreme weather events, mass migration, terrorism, and sea level rise.

Climate change is an issue that is largely misunderstood in the public eye, and this lack of understanding often holds back action and constructive debate. There is a perception that we must choose between jobs and environmental integrity. Between short-term and long-term interest.

However, advances in technological innovation are leading to hope for disruptive changes in the market.

The production cost of solar panels dropped 60% from 2011 to mid-2013, and the cost of components continued to drop through 2013 according to the US Solar Energy Industry Association. 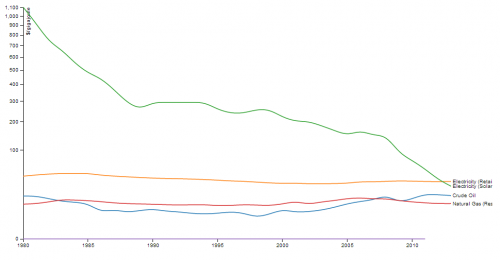 A number of recent industry research notes from independent analysts are very optimistic about continued drops in renewable energy costs and growth in generation.

And a recent Citigroup research announced that the Age of Renewables is beginning. The report predicted continued Solar cost declines of 11% annually over the next five years, in addition to the decreased cost of components and improvements in cell life. The report also predicts price declines for wind resulting from more efficient turbines and improvements in financing.

At the same time, gas prices are rising and becoming more volatile. Overall, the Citigroup authors point out that Solar is becoming very attractive compared to natural gas for peak loads, and Wind, Biomass, Hydro, and geothermal are becoming competitive for baseload generation. They announcThey predict that cost-competitiveness with other Electricity Generation (Citigroup Report, IEA, others)

2) The electric car and advances in battery technology are prepared to revolutionize the transportation sector, and support renewables in the process.

Tesla has captured a lot of imagination with the success of their electric car and ambitions to transform the automobile industry. Their plans announced last week to build a gigafactory for batteries support growth in both electric cars and renewable energy (Business Insider article)

Power storage is a key barrier to renewable energy that is often cited by fossil fuel proponents as a limit to its future on the grid. So the production of batteries on an greater scale at more affordable costs also supports the growth of the renewable energy sector.

China's investment in renewables has played a huge role in driving down the costs of renewables, and they are positioning themselves as a world leader. Recent reports indicate that China continues to lead the world in bringing new renewable capacity online. Perhaps more strikingly, they are now investing more in renewables than fossil and nuclear combined. (Energypost)*Confirm stat*