New York's Climate Convergence coincides with one-year anniversary of the Walk for Reconciliation. Indigenous leadership is once again at the forefront: but this time, there's a call to action. Pull Together is a new campaign launched to unleash the potential of the majority of British Columbians who oppose the Northern Gateway pipeline, together with First Nations along the pipeline route. 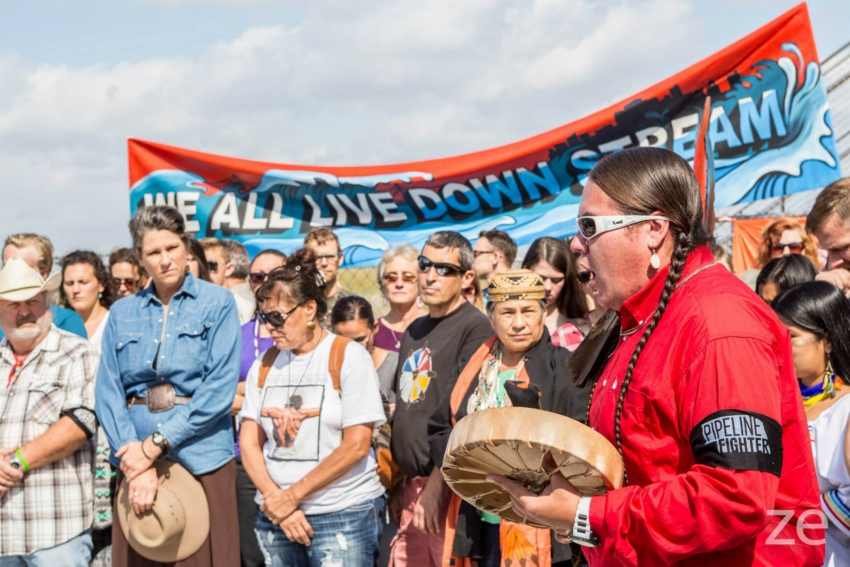 One year after the Reconciliation Walk brought 70,0000 people into the streets of Vancouver to walk with First Nations, another epic march took place.  With a contingent of Indigenous women from Canada and around the world leading the way, Sunday’s 400,000-strong People’s Climate March in New York City shone a spotlight on a different kind of indigenous leadership.

The sheer numbers and diversity of those marching alongside aboriginal people— together with countless others who took part in marches around the globe—was a powerful symbol of the shift towards climate justice within the environmental movement.

Some of the most popular images from the New York City march came from the Indigenous block, where Leonardo DiCaprio, Edward Norton, and Mark Ruffalo walked with a “Shut Down the Tar Sands” banner. They want people to get the message that tar sands expansion— and pipelines across British Columbia —will  bring climate devastation to vulnerable communities around the world.

At home in B.C., stopping the expansion of the tar sands means the Northern Gateway cannot be built. Standing together with the First Nations along the pipeline and tanker routes is crucial to realizing that goal. The passion of thousands of British Columbians who have marched and signed pledges to stop the Northern Gateway is being channelled into a new initiative, Pull Together, launched this month.

“I came to New York to talk about the disproportionate vulnerabilities frontline communities face with relation to climate change,” said Melissa Daniels,  a lawyer with Woodward & Company LLP and member of the Athabasca Chipewyan First Nation.

She should know: her hometown is Fort Chipewyan, located downstream of the tar sands. Throughout her people’s traditional territory, fossil fuel projects are expanding. The cumulative impacts of oil, gas, and coal projects—from extraction to transportation to climate change—are overwhelming.

"It’s crucial for us to tell our truth, that climate change is directly linked to violence towards Indigenous people, violence on Indigenous lands, and colonization," said Erica Violet Lee of Idle No More.

Lee's home province, Saskatchewan, could become a new frontier of the tar sands if the Harper government realizes its agenda to double tar sands production by 2022. With bitumen extraction expansion comes water and air pollution, loss of boreal forests and wildlife habitat, climate change and — less apparently— the destruction of Indigenous ways of life.

"It’s impossible to separate those things, those are our realities. In the environmental movement, those discussions haven’t always been welcome," Lee said.

The Pull Together approach aims to change that paradigm. Indigenous leaders from across the north have invited help from all corners of B.C. to keep the Enbridge Northern Gateway proosal out of their traditional territories. The campaign offers a chance to stand and be counted in one of the most important fights of our time.

Though they have invited help from the wider community,  the message indigenous leaders are bringing is one of empowerment. Lee, who spoke at the opening plenary of the Climate Convergence, said:

"There are so many people in our communities who are fighting these battles on the ground every single day. Connecting with other Indigenous people from all over the world really strengthens my resolve in working on those issues. "

The solidarity being fostered—with the covergence of Indigenous peoples and allies in initiatives like Pull Together— offers a way forward.

Susan Smitten, executive director of RAVEN (Respecting Aboriginal Values and Environmental Needs), believes that First Nations constitutional rights are the strongest tool there is to fight run-away climate change in B.C. “With the dismantling of so much environmental legislation in Canada, the last —and  hopefully inviolable— line of defence is First Nations’ Treaty and Constitutional rights,” said Smitten.

RAVEN are also in New York this week to attend an international conference aimed at increasing indigenous philanthropy.  One goal is to drum up support for a new campaign, Pull Together, that aims to raise $250,000 for five First Nations in B.C. who are  taking legal action to stop the Northern Gateway pipeline project.

This new campaign invites people in B.C. who oppose Enbridge to find empowering ways to raise funds. Just weeks into the campaign, Moksha Yoga has pledged to raise $10,000 through their studios across B.C., while communities from Smithers to Salt Spring have pulled together to raise an additional $25,000.

“Support for Pull Together offers a way for those who stand with First Nations  in the fight for climate justice to put their commitments to reconciliation into action,” said Smitten. "It's great to see people let loose their creative spirit in support of this campaign."

Thanks to the millions of people who marched worldwide, and to the leadership shown by front lines aboriginal activists this weekend, the  climate justice movement has gone viral. Grounding that energy are the commitments that spring from this historic convergence.

“The only true reconciliation worth working towards  is reconciliation with the natural world," said Daniels. "Think in terms of responsibility:  to care for the earth so we can sustain ourselves for time immemorial.”

Andrea Palframan is a campaigner for Pull Together.