Stephen Colbert coined the term "truthiness" to describe “what you want the facts to be, as opposed to what the facts are.” Canadian charities should employ truthiness  to their own advantage, instead of standing by as the Harper government and Conservative pundits use it against them.

Editor's note: This is second in a series which began with "The truth behind the attack on charities and scientists in Canada."  The author wishes to state that she has no relationship with Tides Canada or its principals and is not formally a member of the environmental movement. 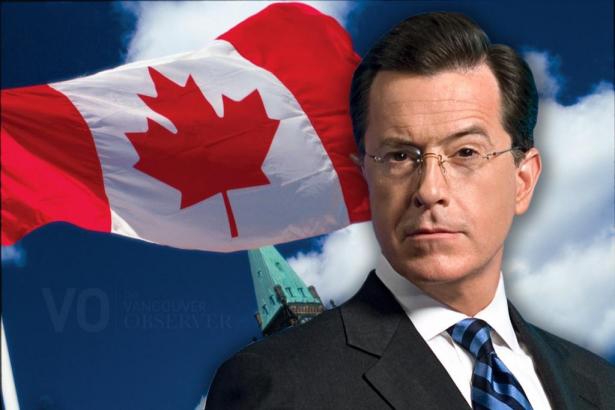 Truthier than thou. Stephen Colbert stands in front of the Canadian flag in a graphic by the Vancouver Observer's Jennifer Ku (prettyuglything.com).

The American Dialect Society crowned "truthiness" the Word of the Year in 2005, a mere 10 weeks after Stephen Colbert first used the term on his show. The term was first coined on The Colbert Report's pilot episode in October 2005. Colbert defined truthiness as “what you want the facts to be, as opposed to what the facts are.”

The term quickly caught on with the general public and intelligent observers of society. Even Nobel Laureate Daniel Kahneman encapsulated the concept of truthiness in his bestseller, Thinking Fast and Slow. To him, truthiness is a reflexive thinking pattern that is obvious, compelling, and wrong. The truthiness error is a creature of the logical fallacy "WYSIATI": what you see is all there is.

Truthiness describes the work of Vivian Krause, an engaging public figure now widely celebrated for her research into foreign donations to the Canadian conservation sector. Krause in many respects is scrupulously transparent, for instance in linking both positive and negative commentary of her research on her blog, and in detailing her now very lucrative speaking engagements for the petroleum industry and other business interests (now pacing at $10,000 per appearance).

Yet truthiness is her stock in trade: the easy leap to the wrong conclusion.

On the surface, this statement appears pretty benign and spot on, except that it’s false. And something else is going on. Krause’s real point is that political advocacy is illegitimate for Canadian charitable organizations.

As a factual statement, that’s flat wrong. As an opinion, it’s a dangerous fiction that should set off alarm bells, because this is precisely how to silence dissent.

Had this theory prevailed, the Canadian Cancer Society would have been blocked from issuing its searing indictment of the Canadian government’s support of asbestos producers at the expense of human health. The Stephen Lewis Foundation would have been prevented from applying public pressure on the government to override pharmaceutical patents for HIV/AIDS treatment in Africa -- an effort that has saved millions of lives.

Then there is the Canadian Bar Association, which made submissions to government on the long-gun registry, human trafficking legislation, technology and privacy, and a host of other matters of serious concern to the public. The list is literally endless.

Canada’s finest tradition and our highest purpose is in our steadfast commitment to public service. This is who we are and what we stand for. The ability of charities to fully and freely advocate in the public realm without fear of retribution goes to the heart of freedom of expression.

And it is not only progressive causes that suffer when freedom of expression is suppressed. Canadian religious leaders who have strongly and vehemently opposed gay marriage and abortion rights would also be silenced.

Should the Canada Revenue Agency investigate the Archbishop of Ottawa, who threatened to withhold communion from Catholic elected representatives who do not support Church doctrine on homosexuality, abortion rights and stem-cell research?  What about the Fraser Institute and its activism in support of conservative causes?

The hard bedrock of democracy is freedom of dissent, and it protects us all, irrespective of our views.

Canadian charities are more than "alms to the poor"

In reality, the Dickensian “alms for the poor” approach to charity bears almost no resemblance to modern Canadian institutions operating within a highly developed and regulated tax framework, one informed by decades of policy development and jurisprudence. “Alms for the poor” is to Canada’s charitable tax policy what chimpanzees are to humans.

We have 85,000 registered charities serving Canadians and the world in multiple key areas including poverty alleviation, education and health, but also religion, professional associations, housing and development, sports and recreation, arts and culture, immigrant services, international initiatives, social inclusion, philanthropic development, scientific research, and many others.

They cover everything from the Catholic Church and McGill University to the Elizabeth Fry Society, Toronto’s Sick Kids Hospital, the Hockey Hall of Fame and the Horsefly Volunteer Fire Department.

This is to say nothing of the Fraser Institute and the David Suzuki Foundation.

Together, these thousands of organizations form the backbone of a non-profit sector generating over $106 billion in revenue, or some 7.1 per cent of the Canadian GDP and employing more than 1.2 million Canadians (who all pay income tax). And it doesn’t stop there. These organizations leverage the volunteer support of some 19 million Canadians; the equivalent of another one million full-time jobs or $14 billion in-kind.

On a per capita basis, Canada is second in the world -- behind the Netherlands -- in its charitable and volunteer activity.

And while it’s true that charities attract revenue from foreign sources -- about $830 million annually, almost all of this revenue goes to aid, educational and religious causes.

Apart from Ducks Unlimited Canada, which drew a remarkable $33 million from foreign sources for wetlands preservation for hunters in 2010, Canadian environmental conservation charities as a whole garnered a mere 1.5 per cent of total foreign contributions to charities.

If this looks a lot more like a molehill than a mountain, never you mind. It’s still political gold to purveyors of inflammatory rhetoric.

The Gender Files
Loretta A. Cella