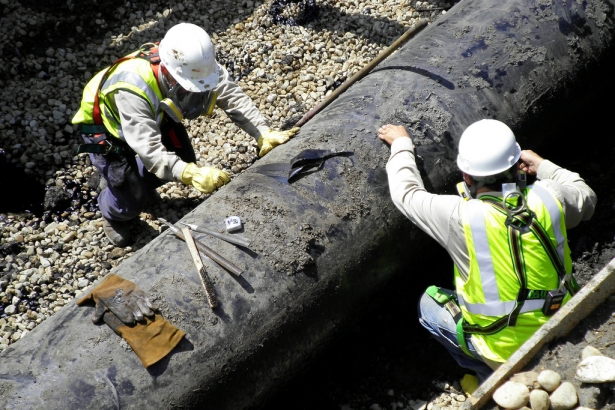 Technicians in personal protective equipment prepare pipe before cutting and removing the section from the Enbridge pipeline oil spill site near Marshall, Michigan. Photo credit: US Government Work on Flickr.

Enbridge Inc. rushed to shut down another main pipeline in Grand Marsh, Wisconsin after an oil spill on Friday.

The pipeline is called Line 14, and carries 318,000 barrels per day on the major Lakehead System that carries light crude oil from Canada to refineries in Chicago. The 24-inch diameter pipe, installed in 1988, was shut down after it released an estimated 1,200 barrels of oil according to a statement from Enbridge Energy Partners. The cause of the spill was undetermined.

“Enbridge is treating this situation as a top priority,” said Richard Adams, vice president of U.S. Operations at Enbridge. “We are bringing all necessary resources to bear.”

This latest spill is not good news for Enbridge, which came under fierce criticism from U.S. regulators and North American news media about its mishandling of a 20,000 barrel oil spill in 2010 in Kalamazoo River, Michigan. It also comes after two oil spills were reported in Alberta.

The National Transportation Safety Board said they found a complete breakdown of safety procedure around the spill in Michigan. The pipeline rupture and oil leak was not detected for 17 hours, and the NTSB said Enbridge employees acted like “Keystone Kops," a reference to incompetent fictional policemen featured in early 20th century silent film comedies. In its defence, Enbridge said that its employees tried to do the "right thing."

An Enbridge pipeline spilled an estimated 230,000 litres into a man-made lake near Elk Point, Alberta in June.

Relatively speaking, this is a smaller oil spill than previous spills. Enbridge did not state when Line 14 would resume normal operations, although news reports state that in most cases, "smaller pipeline leaks can be repaired quickly allowing operations to resume pumping, although regulators may require significant work if they find any cause for alarm."